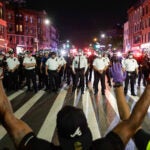 The U.S. on Friday released a 2018 intelligence report that concluded the murder of Washington Post columnist Jamal Khashoggi by Saudi Arabian agents in Turkey was done “on behalf” of and “approved” by Saudi Crown Prince Mohammed bin Salman, who considered the regime critic a threat to the kingdom.

Congress and the White House were briefed on the formerly classified report in November 2018, one month after Khashoggi’s death, and its general conclusions were widely reported. The U.S. Treasury sanctioned 17 Saudis linked to the killing, but took no action against bin Salman, often referred to as MBS, or the kingdom. Then-President Donald Trump rebuffed calls to release the report and falsely asserted that U.S. intelligence was not certain about bin Salman’s role.

President Joseph R. Biden Jr.’s decision to release the report could have implications for relations between the U.S. and Saudi Arabia. Biden has been critical of the Saudi record on human rights, particularly since King Salman, MBS’s father, came to power in 2015, and since taking office Biden has halted military aid to the Saudis’ war in Yemen and lifted the terrorist designation placed on Houthi rebels during the Trump administration.

Karen Elliott House, a Pulitzer Prize-winning journalist and editor for The Wall Street Journal who covered the Middle East and foreign affairs for more than three decades before retiring as the paper’s publisher in 2006, is now a senior fellow at Harvard Kennedy School’s Belfer Center for Science and International Affairs. Elliott House spoke with the Gazette about the report, how Biden is likely to approach U.S.-Saudi relations, and what that could mean for the region.

GAZETTE: We already knew the CIA implicated the crown prince. What else did we learn that was significant or surprising in the report? Why did Biden put out the report when the matter had long faded from the headlines, other than fulfilling a somewhat back-burner campaign promise?

ELLIOTT HOUSE: There are no surprises in the report. No smoking gun. The case against the prince is circumstantial, as it was when the report was concluded more than two years ago. Essentially, the intelligence community concluded that an operation involving close associates of the prince who intimidates all around him could never have taken place without his approval.

Biden seems to want to humiliate the crown prince anew by releasing the report at Congress’ insistence. Democrat activists in Congress who despise the abrasive crown prince in large part because he was close to Donald Trump will undoubtedly push President Biden to take more punishing actions against the crown prince and Saudi Arabia than merely releasing old news blaming him for Jamal Khashoggi’s murder.

This is potentially very dangerous, as President Biden likely will find himself dealing with the 35-year-old prince because his ailing father, King Salman, seems unlikely to survive the next four years.

Indeed, no sooner did Biden release the report than he or his team leaked to The New York Times that he isn’t going to punish Crown Prince Mohammed bin Salman because the “diplomatic cost” is “too high.”

But that will not be the final word. Biden is going to find himself pushed by a Democrat pack to alienate the de facto Saudi leader more than he intends. The Biden administration should beware of unintended consequences. The crown prince is combative and has demonstrated he sometimes acts before thinking through the consequences of his actions. While the release of this report is political, it could spiral into actions and reactions that damage U.S. interests in the Mideast.

GAZETTE: Though the report isn’t new, Biden only got to read the classified version earlier this week. How do you think these revelations will factor into the administration’s approach to Saudi Arabia? Does this force Biden to do more now that the details are public?

ELLIOTT HOUSE: Yes, the president has unleashed a potentially dangerous game. He will be under pressure from his Democrat left to punish Saudi further. MBS wants good relations with the U.S. But make no mistake, his top priority is his survival. He faces any number of problems: royal and religious opponents, an economic reform program that has left unemployment stuck around 15 percent — and double that for young Saudis who have been his support base. All these groups could be emboldened by President Biden’s release of the old report blaming MBS for the murder, and the more so as the president waffled immediately. And don’t expect the crown prince to appreciate the Biden waffle. Make no mistake: MBS’ top priority is his survival.

If the crown prince faces backlash from royals, religious, or frustrated youth, he won’t dither and depart as the Shah of Iran did four decades ago under U.S. human rights pressure. MBS will crack down.

GAZETTE: White House spokesperson Jen Psaki said Thursday “a range of actions” are under consideration by the Biden administration. What kind of punishment or actions by the U.S. were the Saudis and bin Salman most worried about from the Biden administration? And do you think Biden will try to weaken or sidetrack bin Salman before he becomes king?

ELLIOTT HOUSE: The most effective punishment would be against the crown prince and his implicated team by putting sanctions on those individuals. This would inflict pain on those the U.S. is alleging are guilty and not on the country of Saudi Arabia, which isn’t responsible for Mr. Khashoggi’s death.

Saudi officials fear that Biden will seek to isolate the kingdom by making Crown Prince Mohammed bin Salman and his country international outcasts for the murder of Mr. Khashoggi and for the kingdom’s human rights record in general. No one should be surprised that the U.S. government’s report identifies the crown prince as responsible. The Central Intelligence Agency has indicated the crown prince’s complicity from the time the report was concluded but not released in November 2018.

President Biden has made clear he is seeking to reduce U.S. contact with Crown Prince Mohammed by insisting he will speak with the Saudi king, not his son. This is a risky decision by President Biden, who seemed to have instantly realized that and assured The New York Times he doesn’t actually intend to isolate and punish the crown prince.

The U.S. does not get to select the Saudi king. The current king has selected his son, Prince Mohammed. And the current king is elderly and ailing, so the U.S. may soon find itself dealing with a new king — almost certainly Mohammed bin Salman. Public talk of isolating the controversial crown prince will only anger him and encourage his opponents to seek to try to block his ascension upon his father’s death.

While the crown prince seems in full control of all the levers of power, it is very hard for outsiders to know with any specificity what his opponents are planning. So the risk is the president’s excessive talk of declining to deal with MBS, followed by his immediate U-turn after release of the old intelligence report at Congress’ insistence, only creates resentment by the crown prince or, potentially worse, instability, which is surely not in U.S. interests.

Mr. Biden has now showed he doesn’t know his own mind. Almost surely he is going to confront more pressure from Democrats in Congress and human rights groups to punish the kingdom.

Americans should think back on the last time a U.S. administration sought to distinguish itself from predecessors by advocating human rights. President Carter pushed the Shah of Iran, who, when confronted by emboldened opponents in the streets and Jimmy Carter in the White House, dithered and was dethroned. He was replaced by a brutal Islamic theocracy, which led to America’s worst hostage nightmare: 444 days of Tehran holding American hostages.

Talk about unintended consequences. The U.S. needs to recall history.

GAZETTE: What are the primary complications the U.S. will have to take into account before embarking on a particular course of retribution?

ELLIOTT HOUSE: The Biden administration mustn’t let the desire for retribution cloud U.S. interests in the Mideast. While America no longer needs Saudi oil (though the rest of the world does), the U.S. still needs a Mideast stable enough to allow Israel’s democracy to thrive and to avoid endless regional squabbles that risk drawing in U.S. troops.

While the grandstanding on human rights the president did during the campaign and in his first weeks in office may make the Biden team feel good and please Iran, with whom the White House is eager to conclude a new nuclear agreement, it will not enhance Mideast stability, which ought to be our foremost concern. The president’s belated realization of that to The New York Times won’t correct his error.

GAZETTE: Ex–President Trump made no secret of his admiration for the Saudis dating back to his days as a real estate developer, and Jared Kushner was quite chummy with bin Salman. If U.S.-Saudi relations cool, how does that affect Saudi Arabia’s position in the Middle East and the power dynamics overall in region? Who benefits if the kingdom is seen as being on the outs with the U.S., and who steps in to fill the void left by the U.S. as its “big brother” partner? Russia? China?

ELLIOTT HOUSE: The excessively personal diplomacy of President Trump and his unelected son-in-law, Jared Kushner, was unwise. The U.S.-Saudi relationship is properly between the two countries represented by the al Saud monarchs and elected U.S. presidents over nearly 80 years. The Biden administration’s waffling over how to handle the Khashoggi murder and MBS emboldens Riyadh’s opponents. The ultimate winners are those who seek instability in the region — beginning with Iran, Russia, and China.

Neither Russia nor China is in a position to replace U.S. security guarantees in the Mideast for a country like Saudi Arabia. Neither could provide the military muscle to rescue the kingdom should Iran seek to attack it with more than missiles and drones. Iran just last month targeted King Salman’s royal court offices at Yamamah Palace and can be counted on to continue to do so, making President Biden look weak if he doesn’t respond or like a hypocrite on human rights if he steps up to protect Saudi. Loose lips are dangerous to U.S. interests — especially presidential ones.

Biden seems to believe he can talk a lot about human rights without risking any real realignment in the U.S.-Saudi relationship. Sometimes U.S. actions prompt reactions Washington doesn’t expect. America’s standing aside from the shah caused his opponents inside Iran to cooperate to topple him. Surely neither the Iranian people nor U.S. Mideast interests have benefited from the brutal Islamic theocracy that replaced the shah. Hopefully the U.S. has learned something from its history in the region.