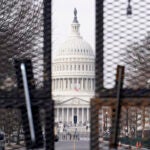 In this time of COVID-19 and civil unrest in America, happiness often seems increasingly elusive. Yet that may not have to be so, and, in fact, such turmoil can offer opportunities for both personal and professional fulfillment.

That was the theme of an online conversation Saturday night between the Dalai Lama and Professor Arthur C. Brooks of Harvard Business School (HBS) and Harvard Kennedy School (HKS). Speaking from his home in Dharamshala, India, the Dalai Lama, longtime leader of Tibetan Buddhism, spoke with Brooks, HKS professor of the practice of public leadership and HBS professor of management practice, for 90 minutes in a live segment of Brooks’ HBS class called “Leadership and Happiness.” The Dalai Lama answered questions from students about their concerns and their duties in a troubled world.

Connection — even as people are usually now forced to work and study separately — is the key to happiness, he said. “We need a sense of oneness. We are each one of 7 billion human beings.” Occasionally aided by an interpreter, the 85-year-old religious leader stressed that point repeatedly. Especially when faced with global crises such as the pandemic and climate change, he said, people must engage as a global community.

“We can no longer say ‘my nation, my country,’ ” he said. “We should say ‘my planet.’ We have to live on this planet together.”

Even during a pandemic, he advised, we can find peace. Science and intellectual analysis, he stressed, are vital. If health professionals advise that it is not safe to gather, we need to respect that. He said he personally has found solitude useful for meditation. But being alone should be a choice: “With technology, the oneness of people becomes more clear,” he added. “We can communicate with each other.”

Isolation, he pointed out, can be largely a state of mind. “Tibet, in ancient times, was lonely but happy.” Even in the sparsely populated, mountainous country, “When one family needed some help, they could ask,” he said, relying on a strong sense of community.

Now, people are clustered in big cities but often without a sense of their interdependency.  “Instead of trust, there is fear and distrust,” he said. Focusing on material wealth or competition rather than on interdependency and the general good “eventually creates anger, so the person will not be happy.”

Countering this outlook is within our power. He described his own travels and how, as a stateless person, he could have felt isolated and alone. Instead, wherever he was, he saw himself as part of a larger community, anywhere in the world.

Pushing further for being in the world, the Dalai Lama promoted what Brooks called “the sanctity of the intellectual life.” He repeatedly returned to the need for academic rigor, even at the expense of religious doctrine. Following discussions with scientists, for example, he has let go of centuries-old Buddhist concepts, “like Mount Meru and the sun and the moon being the same size,” he said, referring to the sacred peak considered the center of the universe. “You must be realistic and analyze,” he said.

“We’re not like other animals,” he said, simply seeking sustenance or safety. “A lot of our problems are our own mental creations.” The solution, he stressed, comes in improving our educational systems to teach community and equality rather than division and difference. Science, he added, can further our understanding of our emotions and the human mind. “A lot of problems were created by the human mind itself, so the remedy also, you see, lies within the human mind. Investigate.”

He concluded his talk by speaking directly to the student audience. Referring to his own status as a refugee and to the problems that his generation has left the world, he became, once again, philosophical. “Time is always moving,” he said. “We cannot change the past. The future is not yet come. What kind of future depends on the present, the younger generation — you are the key people who can create a happier future. So, please, you should not just copy what has happened. New thinking is very necessary. Please think more.”