Turning a light on our implicit biases 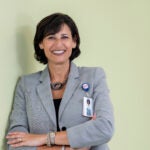 Few people would readily admit that they’re biased when it comes to race, gender, age, class, or nationality. But virtually all of us have such biases, even if we aren’t consciously aware of them, according to Mahzarin Banaji, Cabot Professor of Social Ethics in the Department of Psychology, who studies implicit biases. The trick is figuring out what they are so that we can interfere with their influence on our behavior.

Banaji was the featured speaker at an online seminar Tuesday, “Blindspot: Hidden Biases of Good People,” which was also the title of Banaji’s 2013 book, written with Anthony Greenwald. The presentation was part of Harvard’s first-ever University-wide faculty seminar.

“Precipitated in part by the national reckoning over race, in the wake of George Floyd, Breonna Taylor and others, the phrase ‘implicit bias’ has almost become a household word,” said moderator Judith Singer, Harvard’s senior vice provost for faculty development and diversity. Owing to the high interest on campus, Banaji was slated to present her talk on three different occasions, with the final one at 9 a.m. Thursday.

Banaji opened on Tuesday by recounting the “implicit association” experiments she had done at Yale and at Harvard. The assumptions underlying the research on implicit bias derive from well-established theories of learning and memory and the empirical results are derived from tasks that have their roots in experimental psychology and neuroscience. Banaji’s first experiments found, not surprisingly, that New Englanders associated good things with the Red Sox and bad things with the Yankees.

She then went further by replacing the sports teams with gay and straight, thin and fat, and Black and white. The responses were sometimes surprising: Shown a group of white and Asian faces, a test group at Yale associated the former more with American symbols though all the images were of U.S. citizens. In a further study, the faces of American-born celebrities of Asian descent were associated as less American than those of white celebrities who were in fact European. “This shows how discrepant our implicit bias is from even factual information,” she said.

How can an institution that is almost 400 years old not reveal a history of biases, Banaji said, citing President Charles Eliot’s words on Dexter Gate: “Depart to serve better thy country and thy kind” and asking the audience to think about what he may have meant by the last two words.

She cited Harvard’s current admission strategy of seeking geographic and economic diversity as examples of clear progress — if, as she said, “we are truly interested in bringing the best to Harvard.” She added, “We take these actions consciously, not because they are easy but  because they are in our interest and in the interest of society.”

Moving beyond racial issues, Banaji suggested that we sometimes see only what we believe we should see. To illustrate she showed a video clip of a basketball game and asked the audience to count the number of passes between players. Then the psychologist pointed out that something else had occurred in the video — a woman with an umbrella had walked through — but most watchers failed to register it. “You watch the video with a set of expectations, one of which is that a woman with an umbrella will not walk through a basketball game. When the data contradicts an expectation, the data doesn’t always win.”

Expectations, based on experience, may create associations such as “Valley Girl Uptalk” is the equivalent of “not too bright.” But when a quirky way of speaking spreads to a large number of young people from certain generations,  it stops being a useful guide. And yet, Banaji said, she has been caught in her dismissal of a great idea presented in uptalk.  Banaji stressed that the appropriate course of action is not to ask the person to change the way she speaks but rather for her and other decision makers to know that using language and accents to judge ideas is something people at their own peril.

Banaji closed the talk with a personal story that showed how subtler biases work: She’d once turned down an interview because she had issues with the magazine for which the journalist worked.

The writer accepted this and mentioned she’d been at Yale when Banaji taught there. The professor then surprised herself by agreeing to the interview based on this fragment of shared history that ought not to have influenced her. She urged her colleagues to think about positive actions, such as helping that perpetuate the status quo.

“You and I don’t discriminate the way our ancestors did,” she said. “We don’t go around hurting people who are not members of our own group. We do it in a very civilized way: We discriminate by who we help. The question we should be asking is, ‘Where is my help landing? Is it landing on the most deserved, or just on the one I shared a ZIP code with for four years?’”