A family’s secret language, a reckoning with a Nazi past 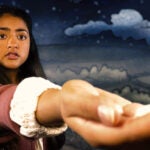 A beloved holiday theater tradition, remote but not forgotten

As a young boy growing up in Germany, Martin Puchner loved to hear his family use Rotwelsch, an obscure argot of slightly suspicious words, colorful-sounding phrases, and even rudimentary symbols used for centuries by itinerant outsiders. To his delight, an hasn machn, which translates literally as “making a rabbit,” meant a quick escape. Saure-Gurken-Zeit, which literally means “a time of pickles,” became being in a pickle, a very old idiom that trickled down to English.

It was only years later in the stacks of Widener Library in 1995 that Puchner, then a graduate student, discovered more dangerous turns of phrase in manuscripts penned by his grandfather, a historian of names, and, much to Puchner’s surprise, a Nazi. In them, Karl Puchner made the argument in Nazi-favored font for distinguishing German names from Jewish-sounding ones. In a 1934 article titled “Family Names as Racial Markers,” Karl also made the case for the creation of a registry of Jewish names and for Jews to be stripped of German first names, actions that could prove useful in finding an answer to the “Jewish question.”

“It has been haunting me for many years. I didn’t know how to write about it,” said Puchner, of the project that would become the just-published “The Language of Thieves: My Family’s Obsession with a Secret Code the Nazis Tried to Eliminate.” “It was always in the background, a periodic drumbeat, and then perhaps five or six years ago, I felt like I needed to deal with this.”

What “The Language of Thieves” did for the Byron and Anita Wien Professor of Drama and of English and Comparative Literature was send Puchner on an ancestral journey, one defined by generations willing and unwilling to reckon with deeply personal family history in the World War II era. And the locus of his inquiry would be his father and uncle’s unlikely embrace of Rotwelsch, alongside his grandfather’s denunciation of it.

Transcript
Martin Puchner: This photograph from 1937 shows my grandparents with their oldest child, my uncle Gunter. When my father developed this photo for a family calendar, he noticed that his father was wearing a button with a swastika, the first indication of his hidden past. I discovered the full extent of my grandfather's devotion to the Nazi cause many years later, while doing research at Widener Library and learned that he had singled out Rotwelsch for particular hatred.

Shortly after discovering his grandfather’s writings, Puchner confronted his father, who haltingly confirmed Karl’s anti-Semitic thinking. He shared with Puchner a sweet family photo of a 1937 picnic enlarged to reveal swastika buttons on Karl’s jacket. But the discovery revealed an even greater shock.

It was “allowed to drift into the background,” Puchner writes in his blend of memoir and philology. “It was their mother who persuaded them to let the matter rest. ‘Leave the old man alone,’ she said about her husband, who was then 61 years old. There was no more talk about it at all,” an exchange emblematic of Germany’s postwar shame and denial.

Research took Puchner from Harvard’s great library back to Germany to uncover his Uncle Günther’s methodical attempts to resuscitate Rotwelsch. The coded mashup of German, Hebrew, and Yiddish was rich with words that reflected its speakers’ lives: on the fringes of society, on the run from the law. (Anti-Semites over the ages, including his grandfather and the theologist Martin Luther, made much of the connection between what was viewed as a criminal argot and Jewish culture.) Sore meant both stolen goods and trinkets for trade; there were many words for police, including greife — one who grabs.

Transcript
Puchner: My uncle spent his life researching and promoting Rotwelsch, the language his father had tried to eradicate. This drawer, which contains some of the countless Rotwelsch expressions he collected over the course of his life is part of his large private archive. I inherited this archive, and now use it as a window into the hidden world of Rotwelsch speakers, which I had glimpsed as a child.

Puchner, who has studied languages all of his professional life and can speak more than six, said Rotwelsch was the one he “took for granted.”

“The language is great fun and witty. I would sometimes regale my friends, ‘Have you ever heard of this?’” he said. “But then I learned about it as part of this itinerant underworld. It expresses the difficulty of this life, and police and prison. Many of these speakers found themselves on the road because of war and economic upheaval.”

Rotwelsch signs, or zinken, were visible for Puchner, who grew up in Nuremberg, as a marker on a street or at his house, where a cross with a circle around was an indicator that his mother would feed itinerants. Toward the end of the book, Puchner met, through an interpreter, a nomad named Chief, who described the glory of Rotwelsch as its ability to recycle words to preserve its very tradition. The Chief laughed at Puchner’s attempts to define the language by Western standards.

“‘You will never know this language,’ his laughter was saying, ‘because you live in another world, a false world … and my whole way of life, my entire language, is one big laughter with you which we, the kochemer, the ones in the know, make fun of you,’” Puchner wrote.

Transcript
Puchner: If you were a vagrant living in Central Europe and came across this sign, you would know that someone using the initials M.A. came by here on Dec. 22, 1832, in the company of two men, the two vertical strokes, and three women or children, represented by the three zeros, taking the direction of the arrow. I learned these signs as a child and loved the mysterious world of vagrants and peddlers from which they emerged.
Transcript
Puchner: Signs carved into trees, or chalked onto foundation stones, similar to American hobo signs were used by speakers of a secret language called Rotwelsch, a combination of German, Yiddish and Hebrew that had existed since the Middle Ages. All speakers knew how to code-switch between local dialects and Rotwelsch, but the person using this sign was particularly proud of her way with language, which is why she chose the parrot as her emblem.

In Nuremberg’s archives, Puchner, who was raised in the city that had become a difficult part of Germany’s past, discovered his Granduncle Otto had served as a Nazi paramilitary brownshirt (along with Puchner’s grandfather), only to later become head archivist of the Nuremberg trials.

“I knew I had an uncle that was an archivist, but it’s an odd thing tied to the national reckoning. As children, we studied the Holocaust very thoroughly, but I didn’t connect it to my own family,” he said. “These people were central figures and not-so central figures who were still around in some powers. Most of the former Nazis stayed in power and rebuilt Germany after the war. It’s what my father and uncle’s generation rebelled against.”

Puchner, who became a U.S. citizen in 2007, thinks about Germany’s reckoning, especially as he has watched his adopted country grapple with its painful racist history this year.

“I think about what’s happening right now, with the changing of street names, and the tearing down of monuments and statues. Suddenly German history seems to resonate in a strange way with both our national reckoning and the fear of fascism,” he said. “What this book has taught me is that tearing down statues is not enough. Your own identity in all of that has to be on the line as well. What happened in Charlottesville with white supremacists waving Nazi flags and a German-American president who doesn’t distance himself from it, and German neo-Nazis waving confederate flags, and the QAnon movement — these are not just historical parallels. There are actual, strange connections between the two countries.”

Transcript
Puchner: As I was researching the history of Rotwelsch and my family's strange relation to it, I began to realize that the story I was telling was a story of archives. The archives assembled by generations of police intent on decoding a criminal language, the Bavarian State Archive, where my grandfather hit his past in a large personnel file, and my uncle's private Rotwelsch archive. What I did not know was that my grandfather's brother, also a Nazi, made a career after the war, as an expert on the Nuremberg Trials – whose documents he guarded in this room of the Nuremberg State Archive over which he presided.

In his own family, facing the past has been particularly difficult, with some relatives becoming defensive, even hostile.“Some no longer speak to me, which surprised me because I was super careful and wrote about living people only as much as was necessary,” he said. “But I learned from these reactions that, in a way, it doesn’t matter what you write, or how careful you are. The sheer fact that you write about your family upsets other members because it’s not their story.”

Puchner thinks of the book as “part of my inheritance,” though it has left him with just as many questions to wrestle with as answers he must accept.

“I’ve puzzled how my grandfather could believe these things, write these things, join this movement. Was he taken in by these conspiracy theories much like these QAnon ideas today, or was he more cynical? He was not from a very educated family, and maybe he wanted to break into academia. I could imagine asking these questions. I don’t know if he would know himself,” he said. “I wanted to come to some closure, though I wasn’t sure writing the book would do that, and I don’t think it has.”