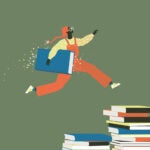 Need a book for a young person?

This month a new gate was unveiled in Harvard Yard, near Houghton Library. It was made possible through support from Peter J. Solomon ’60, M.B.A. ’63, and his wife, Susan, as part of a larger gift, announced in January 2019, to renovate Houghton Library. That donation also included an extensive collection of rare and treasured children’s literature and illustrations, including a copy of the suppressed first edition of “Alice’s Adventures in Wonderland.” These volumes not only provided the catalyst for the Houghton renovation but also inspired some elements of the new gate’s design.

“Susan and I hope that the renovation of Houghton, with its modernized structure and expanded accessibility, will entice more undergraduates and visitors to explore its collection of unique manuscripts, illustrations, and books,” Solomon said. “The new gate is an architectural invitation to Houghton and in its detail connects to our collection of children’s literature, which we are pleased to add to Houghton’s treasures.”

“The new gate is an architectural invitation to Houghton and in its detail connects to our collection of children’s literature, which we are pleased to add to Houghton’s treasures.”
— Peter J. Solomon ’60, M.B.A. ’63

The Peter J. Solomon Gate starts a new chapter to the history of the gates that have stood there over the years. The original Dudley Gate was dedicated in 1915 and demolished in 1947 to make way for the Lamont Library and a service gate in its place.

The Gazette recently spoke with Eric Höweler, designer of the Peter J. Solomon Gate, associate professor of architecture at the Harvard Graduate School of Design, and co-founding principal of Höweler + Yoon Architecture. He discussed the importance of discovery and uncovering the half-hidden clues and themes embedded in the Yard gates; how that informed his design; and how he hopes the gate will encourage those who pass through it to think differently.

As co-founding principal of Höweler + Yoon Architecture, he has worked on recent projects including the Memorial to Enslaved Laborers at the University of Virginia and the MIT Collier Memorial, commemorating the life of Officer Sean Collier, a victim of the Boston Marathon bombers.

GAZETTE:  How did you think about this gate as one of many in the Yard?

HÖWELER: Each gate tells a story. Each one speaks of its time. In the book “The Gates of Harvard,” Blair Kamin, N.F. ’13, looks at the stories and histories behind these gates, and how they are full of lore. His book is a kind of investigative journalism, almost an archaeology. He makes a beautiful argument that there’s so much eclectic architecture within the Yard, and that it is the gates that bind the central campus together. Our approach for this new gate was to find a way to design it so that it would become part of an ensemble but that it would also speak to this time. We hoped this gate might tell different stories, and maybe some of those stories might be quite subtle.

GAZETTE: Say more about how the Yard gates’ lore influenced your design.

HÖWELER: What we see is that there are so many symbols and clues embedded in the gates, and I think that is what’s so beautiful about them. There are some gates where inscriptions are almost hidden. Kamin mentions the Johnston Gate has an inscription that, if read backwards, spells the initials of the person who gave a gift for the gate. There are gates that reference mythology, some that depict animals — the McKean Gate on Mass. Ave. has a boar’s head in the keystone; the Class of 1885 Gate is capped by urns that are adorned by rams’ heads; while the more recent Bradstreet Gate employs tulip flowers instead of spears in the ironwork.

With this gate, we wanted there to be lots of opportunities for discovery, too, so we have hidden messages and patterns, images and silhouettes that you might not see at first, and other techniques to engage and surprise people on multiple levels and to encourage them to look more closely. I remember Peter [Solomon] told us how, as a student, he loved the world of ideas that Harvard opened up. He speaks passionately about encouraging students to be curious, to be playful, to be thoughtful. I think that’s reflected in this approach.

HÖWELER: We were drawn to the idea that books spark our imaginations and how characters inspire and move us, particularly classic children’s literature. Peter is a world-class collector of rare books, illustrations, and manuscripts. That’s one of the reasons he’s given so generously to the Houghton Library. He has given rare editions of “Alice’s Adventures in Wonderland,” Beatrix Potter’s “Peter Rabbit,” and Charles Perrault’s “Tales of Mother Goose,” all beloved children’s books. In fact, as we were thinking about the design, I went to the Houghton and asked to see some of the drawings in the collections. I got to hold in my hands these beautiful pencil drawings of “Alice in Wonderland.” These are images that are burned into our memories as kids. So that experience of holding these artifacts was about encountering something very real, authentic, and auratic.

GAZETTE: What are some of the hidden messages and images? How did you create those?

HÖWELER: People say classical architecture is beautiful because it follows human proportion: the capital is the head of the column, the shaft is the body, the base is like bound feet. Think of the caryatid, [a pillar] in the form of a female figure holding up the temple. We wondered if we could do something like that with the silhouette of Peter Rabbit — a caryatid using that iconic image instead of the classical female figure. In a way, the rabbit’s silhouette is made up of concave and convex forms, so we started playing games with its geometries, we extruded its profiles and we flipped them around.

As we were designing, we wondered if the gate could embody some of the themes from “Alice in Wonderland,” which is about norms and exceptions, perception, tricks of scale, and whimsy. For example, the ironwork gate itself is made up of horizontal bars that coincide with the inflection points of the stone, but they also resemble bookshelves. This is the gate in front of Lamont and Houghton libraries, after all. The horizontal bars also curl to create V-shaped indentations. If you look carefully at the V-shapes, you will notice that they are paired, and they form the iconic image of the books from [Harvard’s] Veritas shield. In fact, if you look hard enough you can find the book in the shield turned upside down, a nod that not everything can be learned from books. The imagery in the gate is subtle, “Now you see it, now you don’t.”

Here’s another example. One day I was walking around Trinity Church, and I noticed there are these little carvings in the stone near to the ground, just a mark, a glyph. So I thought we could carve some marks into the gate’s stone as clues to a story — the Cheshire Cat, there’s a crown for the Red Queen, a top hat for the Mad Hatter. They are not necessarily at eye level. They might be down low, or up high. So, in all these ways we built in clues and codes, but we also provided the means to decode.

GAZETTE: Any last thoughts about this project, perhaps looking back?

HÖWELER: Before we took on the project, my partner and I talked about what it means to build a gate today. Aren’t we in the age of swinging gates open, being more accessible? Should we be designing bridges instead of gates? Then, I looked at all the gates in the Yard very carefully, and many of them are open, even if the designs for the gates don’t necessarily anticipate them in the open position. The McKean Gate is one of the few gates that accommodates the gate in its open position. So, we decided to design the new gate to be open, and its proportions reflect that. And that seemed like the right gesture.

We also didn’t want the Solomon Gate to be something that you just move through, as a threshold, or worse, a barrier. Some of the Yard’s gates have benches, which I think is beautiful, because they invite you to linger, or they provide a place to rest. The new gate also has a portal and a bench where you can actually sit, and if you happen to look up, there’s a message on the underside of the lintel, a passage from “Alice in Wonderland.” It’s tucked away so that you may not notice it in your daily walk, but you might discover it if you sit there to read a book. It reads, “Always speak the truth — think before you speak — and write it down afterwards.”