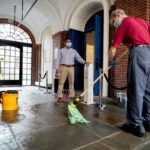 Work that is vital, workers who are essential

It was just days before Election Day when a group of powerhouse women leaders gathered to discuss the importance of civic engagement, local participation, and why voting matters.

“Why should I bother? Why should I make the effort to get to the polls or get my ballot in the mail? What do you say to the skeptics?” These questions were posited by Danielle Allen, James Bryant Conant University Professor and director of the Edmond J. Safra Center for Ethics.

Allen led the Oct. 29 discussion, which included Cambridge Mayor Sumbul Siddiqui; Michelle Tassinari, director and legal counsel for the Office of the Secretary of the commonwealth’s Elections Division; Eneida Tavares, the interim commissioner for the city of Boston’s Elections Department; and Tova Wang, a Democracy Visiting Fellow at the Ash Center at Harvard’s John F. Kennedy School of Government.

Siddiqui explained that whenever she discusses the importance of voting, she always raises voter suppression, and how the very act of voting is “an act of survival. Elections have consequences … Our vote is our power,” she said.

Tavares said Boston voters need only to look back to the 2019 City Council race, “when we had a citywide recount and it came down to one vote,” she said.

And it’s not just about candidates. “Ballot questions [also] have a huge impact on us — whether they’re statewide ballot questions this year, or questions we’ve had in the past,” said Tassinari. “It’s important to create a pattern of civic pride and to be able to participate in all elections … even if it’s local elections, voting for your board of selectmen or your city council — people who are doing things in your city or town and making decisions that are important. This election is certainly important because it’s a presidential election, but every election is important.”

Wang said her work focuses on voters, particularly young voters, having their voices and power be heard. “It’s quite clear to me that young people … know what they want in their public officials and they’re very intent on holding them accountable. This is their moment to stand up and have the youth vote recognized as a force to be reckoned with,” said Wang.

Process too, the panelists argued, can be as important as the act of voting itself.

“It’s important to go through the petition process and collect signatures of registered voters to get those questions on the ballot,” Tassinari continued.

“I’ve been deeply impressed with the work that we’ve been seeing with young people — their understanding of voting being important, but it not being the only thing. They understand that it’s part of an array of tools in the toolbox of things that that need to happen in order to really see the change you want to see in the world,” said Wang.

The panelists discussed how they were implementing additional safety measures due to the COVID-19 pandemic, as well as how they’re planning to handle the expected record turnouts — both at the polls, and with mail-in ballots.

The commonwealth is working very hard to set “realistic expectations” in everything from registration questions to voting lines to even the post-election process, Tassinari said.

The very nature of any election, Allen reminded attendees, is that when someone wins, someone else loses. She asked the panelists to share their advice on how some voters, post-election, should handle the news that their preferred candidate may not have won.

“I think no matter the outcome of an election, it’s about being civically engaged and exercising that right and that privilege that so many have worked give us,” said Siddiqui. “When there’s a loss, it’s difficult. You can become apathetic and despondent … but I think you need to remember that there are still people that need help. There are still people worth fighting for. So, you need to keep fighting and keep trying, and get behind candidates who are preaching to those values that you have. The more we have people engaged who come from different backgrounds — engaged in this political process — the better it is for everyone.”

“Civic engagement,” Allen said, “is not a one-off, one-day thing. Civic engagement is a way of life.” Allen has long been a champion of the importance of civic engagement. One of her more recent projects included working with the Cambridge Public Schools on a new yearlong civics curriculum for eighth-graders.

The panelists agreed. It’s about helping shape the conversation and agenda at all levels of government, joining the discussion, holding politicians up and down the ballot accountable, insuring voter participation, expanding voter opportunities, and continuing to actively stay informed and engaged, they said.

“The best counsel I’ve gotten,” said Allen, “is from one of my favorite authors and novelists, Ralph Ellison. He said, ‘Democracy is not winner take all.’ Losers and winners are part of the same team. That’s one of the hardest things about democracy. For winners to understand the limits of victory, and that that they continue to be responsible to the people who didn’t vote for them.

“But why do we do it,” she continued. “What’s the reward? It is literally the only way to be free and self-governing people. That is why we do this work together, so that we can make decisions together as a whole people. That’s what has to motivate us, and that’s what we have to stay committed to.”