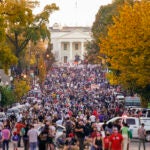 As President-elect Joe Biden prepares for the transition into the White House, experts at a recent Harvard Graduate School of Education (HGSE) webinar on the impact of the election underscored their hopes for a more civil discourse, a safer reopening of schools, and more policies to encourage diversity and inclusiveness.

“Biden has set the tone, both in his campaign and in his speech in Delaware, for resetting our civic language and for trying to create or restart a more inclusive and collective set of civic norms,” said Meira Levinson, professor of education. “The question is: How will that rhetoric follow its way through into legislation, into executive action, into appointments, and into local empowerment?”

Experts acknowledged that the Biden administration faces a tall order due to the deep partisan divisions in the nation, the demands from the racial justice movement, and a pandemic that has killed more than 240,000 people in the U.S., damaged the American economy, and closed schools.

In fact, a key concern of panelists was ensuring that children continue their education in buildings that are safe for students, teachers, administrators, and staff. The government needs to boost funding for changes to make school buildings “healthier” by having higher ventilation rates and better air filtration systems to prevent airborne transmission of COVID-19 and other pathogens, said Allen, director of the healthy buildings program at Harvard T.H. Chan School of Public Health. But the government also needs to prioritize reopening schools, he said.

Educators believe that civic education could play a role in rebuilding civil discourse and social norms and values, which have been weakened during the four years of the Trump administration. But the traditional civic education course will have to change its focus from “how a bill becomes a law” to one that is more racially inclusive and transparent, said Levinson.

For Ang, who studies the impact of police violence on education and local communities, the new administration will have to address police brutality and the national racial reckoning to respond to the demands of minority communities.

“Communities of color have been suffering the ramifications of police violence in their communities for a really long time,” said Ang. “There is a ton of evidence that these things matter, that police violence matters, that how we police our neighborhoods really matters. It matters for things like racial equality and human rights. If we really want to have an equitable society, these are things that we have to continue to pay attention to. Backlash be damned because policing is just such a fundamental issue in a lot of these minority neighborhoods.”

According to Ang’s research, one of the positive effects of racial protests is the increase in turnout and voter registration among young Blacks and Hispanics in regions where police killings take place, highlighting the extent to which these issues are critically important to communities of color.

Under the Biden administration, higher education officials hope there will be a shift in federal education policy. The Trump White House joined lawsuits against affirmative action, investigated universities over acknowledgment of the existence of systemic racial bias and allegations of suppressing conservative speech, and issued new regulations on sexual harassment and assault under Title IX. Charleston, Harvard’s chief diversity and inclusion officer, expects to see a rollback of some of those policies.