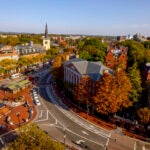 Harvard President Larry Bacow today launched the Committee to Articulate Principles on Renaming that will help guide consideration of questions about renaming campus buildings, spaces, programs, professorships, and other objects in view of their association with historical figures whose advocacy or support of activities would today be found abhorrent by members of the Harvard community.

“I think Harvard is always better when we’re willing to be self-critical, or at least ask in a serious way, ‘How can we become a more enlightened institution?’ To do that, we need to engage people who have both the willingness to ask difficult questions and the courage to answer them in ways that may ultimately challenge us,” said Bacow. As campus conversations about possibly renaming buildings and programs at Harvard has increased, Bacow said, creating a set of general principles would help bring “some consistency in these deliberations across different parts of the University that, given our decentralization, is sometimes difficult to achieve.”

In his official charge to the 16-person committee made up of faculty, alumni, students, and staff from across the University, Bacow called for creating “general principles to help determine when the names of such historical figures should or should not continue to be associated” with structures, spaces, and other namesakes. Bacow also asked the committee to consider a range of factors, including not only the failings of individuals but also their positive contributions to the University and to society; how to view an individual’s activities or beliefs that are inconsistent with current community values but may have been viewed differently earlier; how to preserve and not simply erase the history of an individual whose name is removed; the circumstances under which a historical figure’s name should be removed or retained for some purposes but not others; and the processes that should govern decisions to remove a name from a building, space, program, or other object.

Several colleges and universities, including Yale, Princeton, Stanford, Columbia, and Georgetown, have moved in recent years to drop or change the names of campus buildings that memorialize individuals who acted in ways that would be found abhorrent today or who espoused racist ideals. Bacow encouraged the committee to review and learn from those decisions and to “articulate a set of principles which we think are right for Harvard.”

As the nation continues to reckon with pervasive and persistent racism and discrimination, Harvard needs to examine its own history and reconsider its connections to individuals whose past activities or views many now find abhorrent, Bacow said in a recent interview, adding that humility in the face of history would be an important aspect of the committee’s deliberations. “We also have to be humble about our ability to judge the decisions of our predecessors,” he said, adding that modesty is required when “judging people at different points in time with the benefit of, in some cases, hundreds of years of history that leads people to draw different judgments or interpretations of their actions.”

The committee will be chaired by Harvard President emerita Drew Faust, who advanced Harvard’s efforts to explore its ties to slavery and created a task force on inclusion and belonging. Faust said that her work on belonging, her Civil War scholarship, and her own experiences fighting for equality during the Civil Rights era will help inform her approach with the committee.

“These are issues that have been of concern to me for many years, and so it seems a good match between me and the issues at hand,” said Faust, Arthur Kingsley Porter University Professor. “I think all the committee members recognize that this is a moment when our nation’s long-articulated commitments to justice and equality must at last be realized. The time is here.”

Bacow said Faust and several other historians named to the committee will bring “a particularly informed and nuanced understanding, not just of history and decisions that were made at the time, but how those decisions are judged over time, and how judgments may change over time in light of subsequent events, actions, changing perceptions.” Bacow said he was eager to link the work of the new committee to that of similar efforts unfolding across Harvard.

The panel’s role, he said, “is to ask hard questions, to bring to bear the best scholarship that it can on the subjects, as in the case of the Harvard and the Legacy of Slavery Initiative led by Radcliffe Dean Tomiko Brown-Nagin that is uncovering parts of our history that we may not have explored, and then helping to inform the broader community about how we should think about these issues.”

One committee member, an undergraduate, sees the upcoming work as both substantive and symbolic.

“I think when we name we decide what history we’re possessing,” said Elijah DeVaughn ’21, a concentrator in history and literature with a secondary in African-American studies who is interested in criminal justice policy. “For me, being involved in this committee, understanding what the principles should be, especially in this particular moment of a renewed reckoning around issues of race, marginalization, oppression, thinking about what the principles should be for naming, who we should give or bestow these honors to, what history we should possess when we name certain buildings at our institution, is really important.”

In recent years, groups across the University have been investigating its ties to slavery and reconsidering the prominence given historical figures who supported slavery or held racist views, and also have been developing a more inclusive, welcoming campus. In 2016, the College eliminated the title “house master,” which many found offensive, in favor of “faculty dean.” That same year, the Law School retired a shield modeled on the crest of an 18th century slaveholder, Isaac Royall Jr., whose bequest established the first professorship of law. This month, the Harvard and the Legacy of Slavery Initiative outlined its efforts to explore ties to slavery with new programming and grant-funded research. In September, Claudine Gay, the Edgerley Family Dean of the Faculty of Arts and Sciences (FAS), announced a task force to develop a framework for creating more-inclusive imagery across FAS spaces.

Other initiatives have honored enslaved people who toiled largely unseen, whether in the homes of Harvard presidents or on faraway plantations whose profits fueled the wealth of merchants who were alumni and benefactors. In 2016, Faust, along with the Civil Rights icon and late U.S. Rep. John Lewis, unveiled a plaque on Wadsworth House to honor Titus, Venus, Bilhah, and Juba, four enslaved people who lived and worked there in the 1700s. In 2017, Faust helped dedicate a similar plaque on the Law School campus.

… When addressing such difficult topics and making decisions about how to proceed, it’s “critical to consider all the possible interests in play, and find out how to weigh them.”
— Annette Gordon-Reed, committee member

Another committee member, Annette Gordon-Reed, the Carl M. Loeb University Professor, a scholar of law and history, and author of groundbreaking work on the relationship between Founding Father Thomas Jefferson and Sally Hemings, a person he enslaved, said her research has long been about “ensuring that different perspectives are brought to the table in discussions about slavery and race.” When addressing such difficult topics and making decisions about how to proceed, it’s “critical to consider all the possible interests in play, and find out how to weigh them. This requires some self-interrogation about biases and preferences that may prevent seeing matters clearly.”

The committee’s membership is as follows:

Committee to Articulate Principles on Renaming

David Laibson ’88
Robert I. Goldman Professor of Economics, Faculty of Arts and Sciences