Salvaging another piece of Black history 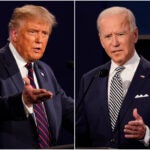 Debate tips for Biden and Trump

A crucial part of Black history sits hidden underwater amid the ruins of slave ships that sank during voyages. A group of marine archaeologists, known as Diving with a Purpose, has taken on the task of viewing those artifacts and bringing the untold stories they represent into the light.

Two of the group’s founders, Albert José Jones, professor emeritus, marine and environmental science, University of the District of Columbia, and Jay Haigler, a master scuba diver trainer, will speak Thursday evening in an online talk presented by the Harvard Museums of Science and Culture. They will trace the organization’s 15-year history, which has included expeditions in Africa, Brazil, Cuba, and Florida and recovering relics from slave ships as well as investigating aircraft flown by African American pilots in World War II.

A Korean War veteran who learned to dive during his time in the service, Jones formed a diving group that eventually became the National Association of Black SCUBA Divers, of which Haigler was a member. Diving with a Purpose was an outgrowth of the Divers.

Both Jones and Haigler were called in after another organization, looking for the wreckage of a Spanish treasure galleon, discovered the Henrietta Marie, a British slave ship that sank off the coast of Florida around 1701.

“We were shown the artifacts, and it moved us so much that we decided to raise money to put a memorial on the side of the Henrietta Marie, and for years we made an annual pilgrimage to that plaque,” Haigler said. That led to the more ambitious project of documenting the wrecks of other ships.

Jones recalled, “Many of us got upset and cried when we saw the Henrietta Marie. After that we had a meeting and decided we needed to do something. We need to honor the people who were on those ships so that they wouldn’t be lost. We decided that we needed to be trained properly to do this. We don’t want people down there with picks and shovels destroying 100 years of history.”

During 2015 Diving with a Purpose was part of a major effort, directed by the international Slave Wrecks Project, to document the remnants of the São José-Paquete de Africa, a Portuguese ship that sank off Cape Town in South Africa in 1794, its enslaved passengers bound for sugar plantations in Brazil. Researchers believe this was the first time wreckage was recovered from a ship that went down with slaves aboard. Artifacts were eventually displayed at the Smithsonian.

According to Haigler,  some of these excursions begin as pure detective work. “One place where we start looking is insurance records: These ships were insured. There was an investigation. A claim was filed, and a payment was made for cargo that was lost — no different from when there is a car accident. But unfortunately, at this time human beings were the cargo. So as you make your way through the claims you start to connect with the idea that these are your ancestors.”

Haigler said the research filled him with a sense of mission. “When we are documenting ships involved in the global slave trade, this is consecrated ground. We are investigating the greatest crime ever against humanity. Then comes the feeling of aspiration — because the important thing is to make sure the story is told,” he said.

Each new artifact adds to the picture, Jones said. “If you find pottery or a musket, you can investigate where that was made. We’ve found pottery of Chinese origin [in the São José], which means the ship would have been to China or to a port where it was sold. Every little piece puts something in the puzzle that wasn’t there before.”

“When we are documenting ships involved in the global slave trade, this is consecrated ground. We are investigating the greatest crime ever against humanity.”
— Jay Haigler

Not all of the diving group’s excursions involve slave ships. One of the most memorable involved the ruins of airplanes flown by World War II’s Tuskegee Airmen, the first unit of Black military aviators in America’s history.

Haigler said, “The airmen prevailed through the thought that African Americans did not have the ability to become fighter pilots. They overcame segregation in the Jim Crow South while becoming world class. That was their story. But it isn’t as well known that after their basic training, they got advanced training in the great state of Michigan. There were 14 accidents where there was loss of life, and five of those 14 had crashed in the Great Lakes.”

They visited a site where the plane, because it went down in the fresh water of Lake Huron, was remarkably well preserved.

“The rubber tires were still there,” he said. “And we know that this was the plane of 2nd Lt. Frank H. Moody.”

A Michigan diver had found the plane during salvage operations for a sunken tugboat, and he reported it to state officials. Until then, the plane’s location had been hidden, like much of African American history itself.

This article was updated because of new information on Feb. 11, 2021.