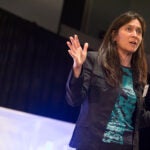 Renowned documentary photographer and former professor of visual and environmental studies Chris Killip died from lung cancer on Oct. 13. He was 74. Killip was a professor of photography in VES (now Art, Film, and Visual Studies) from 1991 to 2017, and the department chair from 1994 to 1998. For more than two decades, he had worked from the basement of the Carpenter Center, sharing his love of the art form with students and colleagues.

“Photography and cinema both occupy the lowest level of the Carpenter Center, which is sometimes called the basement level. But Chris and I took to calling it the foundation of the Carpenter Center because it was there that students were taught to make and to learn from images formed from light and shadow; a primary, alchemical art and craft inspired by the actual world with a unique mysterious intimacy and immediacy,” said Haden Guest, director of the Harvard Film Archive and senior lecturer on AFVS.

“He was a gifted and passionate teacher,” said Robb Moss, Harvard College Professor and current chair of the AFVS department. “He regularly followed up with students who were having a difficult time. He was often invited to their weddings. We were lucky to have him as a friend and colleague for so many years, and we will miss him.”

Born in Douglas on the Isle of Man, Killip left school at age 16 to work in the hospitality industry. After working as a commercial photography assistant in London for years, he returned to the Isle of Man in the early 1970s to capture his hometown on film, working in his father’s pub at night. He published his first book of photography, “Isle of Man,” in 1980.

In 1988, Killip published his second and most famous book of photographs, “In Flagrante,” which captured the everyday fallout from deindustrialization and economic decline in northeastern England in the 1970s and 1980s. His arresting documentary style of photography captured the attention of critics and viewers alike, and Killip received the inaugural Henri Cartier-Bresson Award, now called le Prix HCP.

“True to his innkeeper upbringing, Chris would often open his home to the department following art openings, film screenings, or holidays. He liked for people to get together and have a good time,” said Moss. “Chris could be irreverent, impertinent, and a brilliant responder to images. If you knew him, he was also warm, funny, and exquisitely aware of his surroundings and the class distinctions that often go unremarked upon in North American society.”

From the skinhead in 1976’s “Youth on Wall, Jarrow, Tyneside” to the contemplative child in “Simon being taken to sea for the first time since his father drowned” in 1983, Killip imbued his images with a deep sense of empathy and understanding. He gained the trust of his subjects and avoided exploitation in his pursuit of authenticity and beauty.

“Chris taught us that the position of the photographer is a moral and ethical stance,” said Guest. “I see Chris’ work as a shining example of art that makes clear its necessity through its beauty and intimacy and compassion, but also through the ways his images dignify his working-class subjects by frankly acknowledging and never romanticizing their struggles and singularities, practice that is profoundly important.”

His books of photography included four large-format zines published in 2018: “Portraits,” “The Station,” “Skinningrove,” and “The Last Ships.”

“His photographs embodied Henri Cartier-Bresson’s emphasis on the decisive moments, and Josef Koudelka’s eye for the surreal. He captured in arresting black-and-white photographs fleeting moments filled with powerful emotions,” said AFVS Professor Sharon Harper. “He was looking closely at people, labor, and the plight of the worker.”

The introductory photography course VES 40a, which he ran for many years, accommodated 100 students split into 10 sections. Even with so many spots, said Moss, the class often attracted two or three times as many students as it could accommodate.

“Chris leaves quite a legacy of his documentary photography, which is known internationally, but also he has a legacy of students who were devoted to him and discovered photography through their studies with him,” added Harper.

Museum Folkwang in Essen, Germany, held a major retrospective of Killip’s work in 2012. His photographs are in the permanent collections of museums and galleries around the world, including the Museum of Modern Art in New York, the Fine Arts Museum of San Francisco, the Getty Museum in Los Angeles, the Stedelijk Museum Amsterdam, and the Victoria and Albert Museum in London.

“Chris established photography as central to the department’s ecosystem, and the rich dialogue between media that remains central to AFVS,” said Guest. “I like to think of Chris as an anchor and a ballast to the work we do today, a foundation upon which the department stands.”

He is survived by his wife, Mary Halpenny, who also worked at Harvard; a son, Matthew, from an earlier relationship with Czech photographer Markéta Luskačová; a stepson, Joshua; two granddaughters; and a brother.