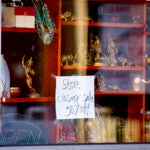 As the 2020 presidential election nears closer, a key voting bloc for President Donald Trump remains white evangelicals. In a recent Pew Research Center survey, 82 percent of white evangelicals said they would vote for Trump this year. Nearly the same percentage backed him in 2016.

Kerby recently answered questions about her research and explained how white evangelicals shapeshift between roles of faithful patriots and persecuted outsiders, why the group continually reimagines the American story and their own place in it, and what it all means for the 2020 election.

HDS: Can you discuss what interested you in this topic?

Kerby: What interested me most about these tours was the chance to talk to ordinary people. We hear plenty in the media from white evangelical leaders and elites, but we don’t often hear from the rank-and-file. I wanted to know what “Christian America” meant to a working mother in Iowa, to a retired nurse on the West Coast, to a school teacher from Florida. I was limited, of course, to people who chose to come on these tours in the first place, but it was still revealing. And what they said helped me to spot similar patterns of thought and speech in the wider white evangelical subculture in the kinds of media and products that ordinary white evangelicals consume. If we want to know why Christian nationalism is so persuasive to so many Americans, that’s the level we need to be looking at.

These tours promised participants a trip to D.C. to see proof of everything that Christian nationalists claim about the Christian heritage of the United States. The online advertising alone was fascinating: it was all about how America’s Christian history was being erased, and Christian Americans needed to step up and preserve it. The tour of D.C., of course, was how they could do so.

HDS: For people unfamiliar with Christian heritage tours, can you describe what they are and describe some of the people you met — tour guides and tourists — while researching them?

Kerby: If you’ve ever been to D.C., you’ve probably seen most of the sites that Christian heritage tours would see. In many ways, they’re like any other tour: they see Capitol Hill, the war memorials on the National Mall, Arlington National Cemetery, and so on. When I first started this research, one guide went out of her way to ensure I knew ahead of time that they didn’t visit any churches! It’s a Christian tour, but the Christianity comes out in the stories they tell about the sites and in the way they spotlight every reference to Christianity, even really minor ones. For them, it was a big deal to see something as tiny as a Ten Commandments icon in the tile floor of the National Archives vestibule. That was one more piece of evidence for America’s Christian heritage, as they saw it.

I participated in nine of these tours, and the overwhelming majority of tourists I met were white, evangelical, and politically conservative. They came from all over the U.S., and most of them traveled in family groups. They were really kind and welcoming to me, I think especially because I was a young woman traveling alone. One group of women in their 70s tried really hard to set me up with one of their nephews, because he also liked history!

The tour guides were also an interesting group. Even though they worked for different companies, their messages about Christian heritage were really similar, echoing claims made by David Barton and other leaders of the Christian Right. The women guides tended to be a little more reserved, while the men tended to take more of a fiery, prophetic tone. Sometimes it felt like a revival on the bus as they worked the crowd’s emotions. People would clap or shout “amen!” during the stories. But regardless of how each guide chose to lead their group, they were all passionately committed to this work as a means of serving God and country. 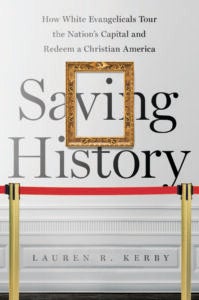 HDS: You refer to this group as “white evangelicals,” not “evangelicals.” Can you say more about why the distinction matters?

Kerby: By now, it’s old news that 81 percent of white evangelicals voted for Donald Trump. Non-white evangelicals, however, voted against him at a similar rate. Lumping all evangelicals together, as many outlets still do, erases non-white evangelicals. Even when theology is shared across these groups, the political behaviors I’m interested in are distinct. So it’s important to be specific about which subset of evangelicals I’m talking about, and even then, it’s worth noting that white evangelicals are themselves an internally diverse group. There’s enough commonality that we can make generalizations, but there will always be exceptions.

The other reason I emphasize this group’s whiteness is because I’m talking about their historical relationship to the United States, and race is inextricable from that. White supremacy in the United States means that white evangelicals have enjoyed privileges and safety not granted to non-white communities, evangelical or otherwise. And one of the most distinctive features of Christian heritage tours is the way they highlight white Christians in American history and exclude everyone else. I want to draw attention to that with my word choice, because it shows the entanglement of Christian nationalism with white supremacy. When tourists say “Christian America,” they mean white evangelical America. It’s much narrower than it sounds.

HDS: You describe the stories that white evangelicals tell about themselves in relation to the nation falling into two narrative arcs — the insider and outsider narratives. Can you explain what you mean by that?

Kerby: While I was in D.C., I noticed these two distinct — and contradictory — stories that guides and tourists told about Christianity in the U.S. In what I call the insider narrative, they claim that America is a Christian nation and that they, as Christians, are the rightful leaders of the nation. They argue that American law, for instance, is based in biblical law, and that the founders intended that Christianity would occupy a privileged position in government.

But they also tell stories about how the nation has abandoned its covenant with the Christian God, causing the United States to experience decline in morality and military power. This is what I call the outsider narrative: a story in which Christians are persecuted and victimized by a secular establishment that wants to erase the nation’s Christian heritage and keep conservative Christians and their values out of government.

Beyond the context of D.C., these two narratives are patterns for how white evangelicals talk about their relationship to the United States. Together, they form a jeremiad, the prophetic call for repentance and return to a past righteous state. And it’s worth noting that one of the most famous slogans of the 21st century follows this exact pattern: Make America Great Again.

HDS: In the book you write about how white evangelicals have created four roles for themselves in regard to the history of the nation: founder, exile, victim, and savior. You say they move easily among these four roles and this flexibility is a source of political power for the group. How so?

“I’m really hoping we don’t have a ‘basket of deplorables’ kind of moment this fall. But if we do, it will be a windfall for Trump. And we can do better than that.”

Kerby: An essential part of political strategy is how you position yourself in the story you’re telling. Are you the scrappy underdog? Are you the avatar for tradition? Are you a sympathetic victim? Depending on the circumstances, you’ll probably benefit more from one position than another.

These four roles I identify — founder, exile, victim, and savior — are the different positions white evangelicals take in their political activities. They offer a lot of range, and if one isn’t working, it’s easy to switch to another role. For instance, as founders they can appeal to the authority of George Washington and other Christian leaders in early America to justify things like posting “In God We Trust” in schools. But if, say, something unflattering comes to light about a white evangelical leader, the victim role lets him dismiss it as an attack from anti-Christian forces. It’s a ready-made defense.

HDS: You observed these tours in 2014 and 2015, before the election of Donald Trump as president. Trump won 81 percent of the white evangelical vote in 2016, and his favorability rating among the group remains very high. How do you think his election impacted these tours, the narratives they impart, and the reasons why people may participate in them?

Kerby: In 2014 and 2015, white evangelicals were feeling really under siege, and that came up a lot in the tours. They felt deeply threatened by Barack Obama, the Affordable Care Act, and the pending Obergefell v. Hodges (2015) decision that legalized same-sex marriage nationwide. I think a lot of us, not just white evangelicals, felt like progressive values were winning at the time.

You might think white evangelicals, at least, would be feeling more optimistic, now that Donald Trump is in office, the Senate is Republican, and there are over 200 newly appointed conservative judges, including two new Supreme Court justices. But that feeling of being under siege is too politically expedient to disappear any time soon. Trump is still using the same jeremiad and talking about the threats to Christianity and “our way of life.” So I would expect that Christian heritage tours are telling the same stories — but now they have the White House backing up their claims.

HDS: What might your research have us expect for the 2020 election cycle?

Kerby: After the way this year has gone already, who knows! Yet another unforeseen event might dramatically shift the political landscape. Barring that, though, I think we can expect white evangelicals to remain firmly on Trump’s side. This matrix of narratives is just too effective: Any time he fails, or is said to fail, he can step into the victim role and just brush it off. But he also plays on these other narratives and roles incredibly well: He tells white evangelicals that they are exiles and victims, and that he will save them. That’s not a new strategy, by the way. The Christian Right started developing it in the 1970s. It’s really entrenched in how white evangelicals think about the nation and how Republicans campaign, and I expect it’s going to stay that way for some time.

One other thing we can expect is that if Democrats take cheap shots or make dismissive comments about white evangelicals, it will add fuel to the fire of Trump’s campaign. Democrats have plenty to criticize in terms of policies that appeal to Trump’s white evangelical base, but they need to tread carefully. The Christian Right’s narratives are ready and waiting to turn any critique to their advantage by shifting the conversation to be about Christian persecution, not the actual issues at stake. I’m really hoping we don’t have a “basket of deplorables” kind of moment this fall. But if we do, it will be a windfall for Trump. And we can do better than that. 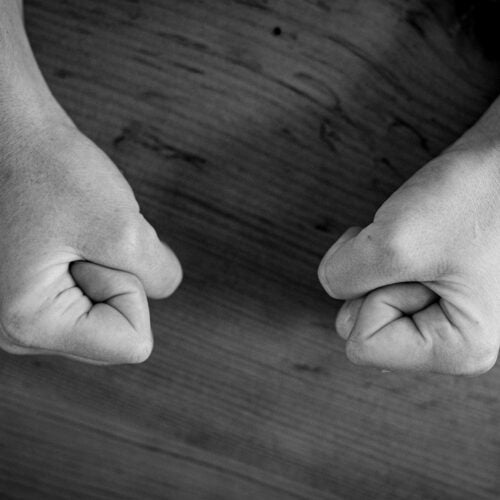 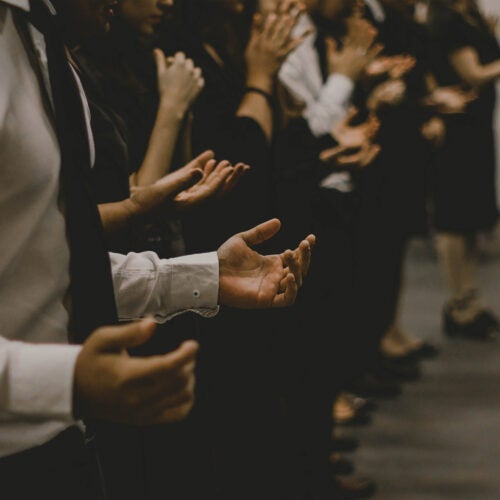