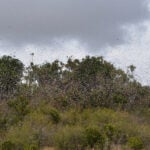 What happens when an African grey parrot goes head-to-head with 21 Harvard students in a test measuring a type of visual memory? Put simply: The parrot moves to the head of the class.

Harvard researchers compared how 21 human adults and 21 6- to 8-year-old children stacked up against an African grey parrot named Griffin in a complex version of the classic shell game.

It worked like this: Tiny colored pom-poms were covered with cups and then shuffled, so participants had to track which object was under which cup. The experimenter then showed them a pom-pom that matched one of the same color hidden under one of the cups and asked them to point at the cup. (Griffin, of course, used his beak to point.) The participants were tested on tracking two, three, and four different-colored pom-poms. The position of the cups were swapped zero to four times for each of those combinations. Griffin and the students did 120 trials; the children did 36.

The game tests the brain’s ability to retain memory of items that are no longer in view, and then updating when faced with new information, like a change in location. This cognitive system is known as visual working memory and is the one of the foundations for intelligent behavior.

So how did the parrot fare? Griffin outperformed the 6- to 8-year-olds across all levels on average, and he performed either as well as or slightly better than the 21 Harvard undergraduates on 12 of the 14 of trial types.

That’s not bad at all for a so-called bird brain.

“Think about it: Grey parrot outperforms Harvard undergrads. That’s pretty freaking awesome,” said Hrag Pailian, the postdoctoral fellow at the Graduate School of Arts and Sciences who led the experiment. “We had students concentrating in engineering, pre-meds, this, that, seniors, and he just kicked their butts.”

Full disclosure: Griffin has been the star of past cognitive studies, like showing he’s smarter than the typical 4-year-old and as intelligent as a 6- to 8-year-old child. But making Harvard students do a double take on their own intelligence is quite the step up.

To be fair, the Harvard students did manage to keep (some) of their Crimson pride intact. On the final two tests, which involved the most items and the most movement, the adults had the clear edge. Griffin’s average dipped toward the children’s performance — though never below it. The researchers were unable to determine the precise reason for this drop, but they believe it has something to do with the way human intelligence works (arguably making the Harvard students’ victory a matter of performance enhancement of the genetic variety).

The experiment was part of a study published in Scientific Reports in May. Pailian was the lead author and he collaborated with comparative psychologist Irene Pepperberg, Henry A. Morss Jr. and Elisabeth W. Morss Professor of Psychology Susan Carey, and Justin Halberda at John Hopkins University.

The researchers were investigating the limits of the brain’s ability to process and update mental representations. In other words, they were looking at the “working” portion of the visual working memory system. The ability is referred to as manipulation. And ultimately, they were hoping to gain insights into the development and origin of the visual working memory system and the nature of human intelligence.

“Any operation that you perform in your mind, it takes place in visual working memory,” Pailian said. “You store information from the outside world; you play around with it; and then you shuttle it up for higher cognition. It helps fuel STEM aptitude, mental wellness, and all these different types of important cognitive attributes …. We think that one of the main components of human intelligence, the key characteristic is that we’re able to think about all these things in our minds and do these mental manipulations, but if we find that other animals, other species can perform those manipulation operations [and also see how ancient this ability is], maybe that can help us inform what delineates human intelligence from other animal intelligence, as well.”

At a broad level, the paper’s findings hint at the possible evolutionary origins of the ability to manipulate visual memory. Griffin’s success suggests it is not limited to humans and might be shared across species derived from a common ancestor. In this case, the ancestor would be the dinosaurs, since humans and parrots are separated by more than 300 million years of evolution.

“We’re suggesting that it’s possible — we can’t prove this — that dinosaurs, our common ancestor, may have had some basic capacity,” said Pepperberg, a research associate in Harvard’s Psychology Department. “Then this [advanced manipulation] ability could have evolved in parallel [in primates and birds]. The other possibility is that our common ancestor lacked this ability, and it somehow arose independently in these two lines. But we’re arguing that because manipulation is built on storage capacity, and so many different species have similar storage capacities, that some simple form of manipulation likely existed in a common ancestor.”

In the paper, the researchers note that future work is needed to confirm manipulation ability across a wider variety of species and identify its origins.

“It’s not that we proved everything provable,” Pepperberg added. “It’s that we’ve demonstrated a behavior that leads to a lot of different questions.”

Griffin was a prime candidate for this experiment because the researchers needed an animal whose brain was functionally similar to humans but evolutionarily distant for comparison. It was also likely that parrots possessed the manipulation ability because of environmental pressures in the wild, like tracking their hungry fledglings or threats like predators. Plus, Griffin is always ready to show off his brain power and earn a few cashews as a reward.

“He’s the kind of student who asks you, ‘What do I have to do to get the A?’” and then goes and does it, Pepperberg said. 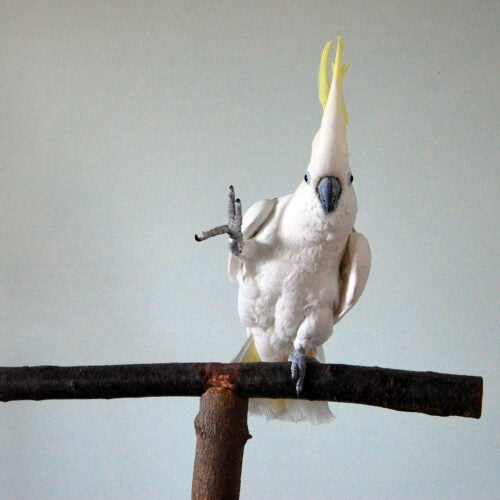