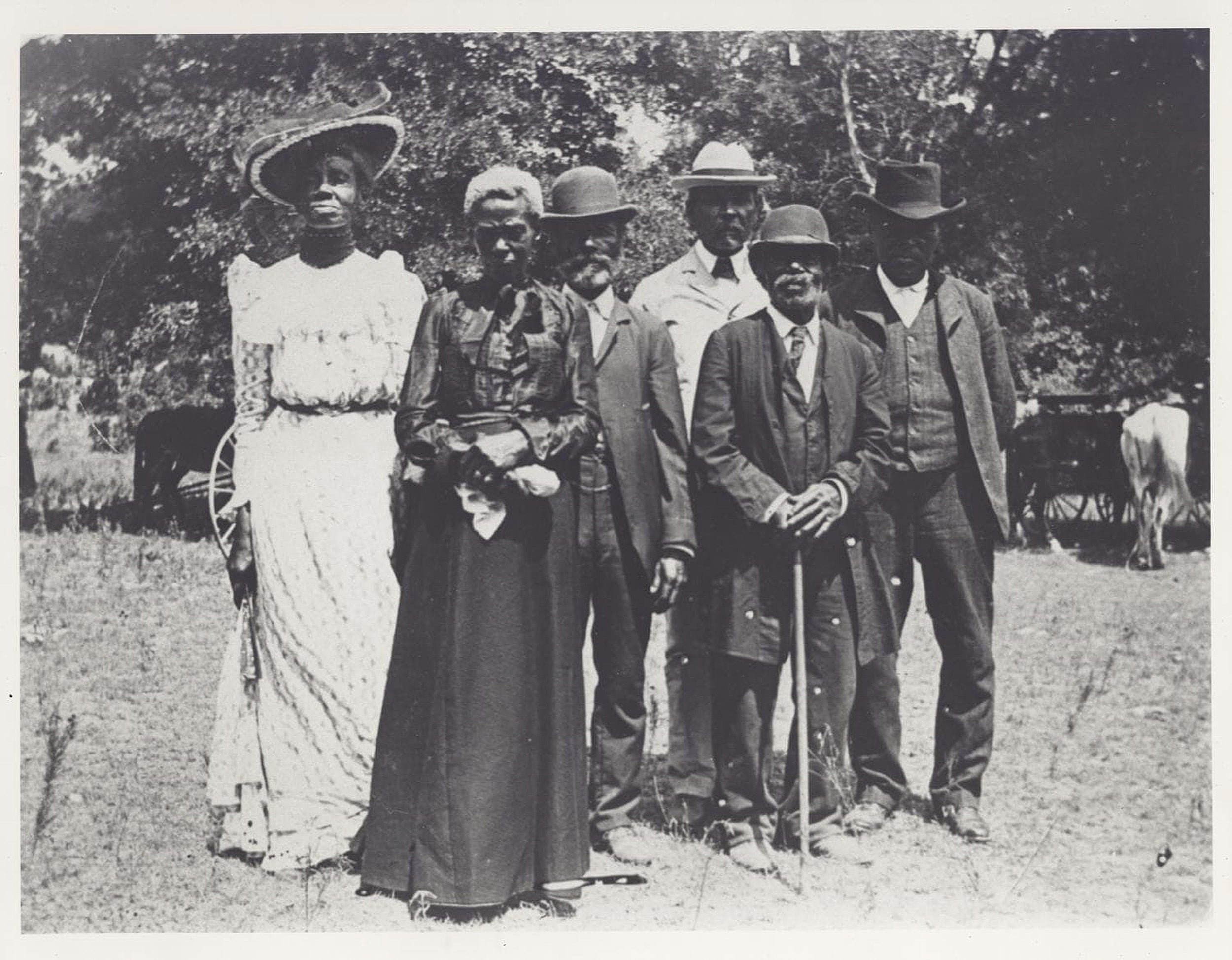 In a closely watched and hotly awaited ruling, the U.S. Supreme Court narrowly rejected the Trump’s administration’s move to end a program protecting young undocumented immigrants brought to the country as children, shielding for now nearly 700,000 so-called Dreamers from deportation.

The 5-4 decision on the Deferred Action for Childhood Arrivals (DACA) program was written by Chief Justice John Roberts ’76, J.D. ’79, who sided with more-liberal justices for the second time this week in a major, high-profile case. News of the judgment was met with relief and celebration by Dreamers and supporters of immigrants’ rights across the country, as well as by DACA recipients, professors, and staff in the Harvard community.

“Congress should now turn its attention to immigration reform and provide a pathway to citizenship for these young people and others, including individuals with temporary protected status,” wrote Harvard President Larry Bacow in a letter to faculty, staff, students, and alumni. “I also hope that rather than reflexively closing our borders to immigrants, and to nonimmigrants who wish to pursue educational opportunities in America, we can once again live up to our promise as a nation that welcomes those who seek a better life for themselves and their children — people who have traditionally contributed much to the fabric and greatness of our country,”

Protecting undocumented students both on Harvard’s campus and beyond has been a priority for Bacow, who is the son of immigrants. “There are complex issues that need to be addressed, but America will be better — and stronger — for all parties coming together to find common ground on this issue. Until then, I will continue to advocate for Dreamers and for their ability to contribute to a country that has been their home since childhood,” he wrote.

Members of the community, including students and alumni who are protected under DACA praised the Court’s ruling, among them Mitchell Santos Toledo, J.D. ’20, a recent Harvard Law School graduate who arrived in Cambridge not long after President Donald Trump announced his plans in 2017 to cancel the program, which had been instituted by President Barack Obama in 2012.

“It was rough. You’re talking about moving across the country, starting this huge academic journey at a School at Harvard, and then having the only semblance of protection that you’ve known for the past five, six years sort of just yanked from underneath you,” said Toledo, whose name was listed in the documents submitted to the court in support of DACA.

“I grew up with the fear of deportation and would have nightmares of being forced to return to a country I only experienced in scraps — of stories, photographs, and handmade bracelets sent by relatives.”
— Daniela Castro '22

Toledo called the court’s decision “a validation of the years of advocacy, by undocumented folks and our allies, on the streets and in the halls of our nation’s courts and congressional chambers.”

“This ongoing effort reflects not only the passion and dedication of the undocumented community but also the resiliency instilled in us by generations of our ancestors without which this outcome may have been different,” he said. “While this is a moment for the DACA-eligible community to take in a breath of relief, we absolutely cannot forget the bigger picture — comprehensive immigration reform benefiting all undocumented folks.”

“I grew up with the fear of deportation and would have nightmares of being forced to return to a country I only experienced in scraps — of stories, photographs, and handmade bracelets sent by relatives,” said Castro, who is also the advocacy chair at Act on a Dream, a student-based group on campus that supports immigration reform. And as appreciative as she is of the protection DACA affords youth like her, Castro notes that the program “forgets about parents, forgets about people that have established roots and relations in a country that refuses to accept them and threatens to dismantle their legacies.” It also fails, she said, to further the goal of “citizenship for all undocumented people.”

Leo Garcia ’21 co-directs Act on a Dream. A native of Bogota, Colombia, he came to the U.S. at the age of 3 and grew up in Houston. Garcia received protection under DACA several years ago, but said he still lived in fear for his parents and for the millions of other undocumented immigrants living in the U.S.

Garcia called Thursday’s ruling, along with the court’s decision earlier this week protecting gay and transgendered workers’ rights, “a reminder this is a bare-minimum recognition of these communities being human and being deserving of rights. I think that these are small victories. We need to push for a more inclusive solution, a more long-term solution” that covers the millions of immigrants and provides a pathway to citizenship.

Roberto Gonzales, a professor of education at the Harvard Graduate School of Education, has helped lead a study that tracks how the administrative policy has affected the lives of hundreds of people living under its protection. Bracing for a different decision, Gonzales said he, along with a number of his Harvard colleagues, was surprised by the court’s ruling.

“The longer this decision got put off, I think that many of us really thought that it was going to go the other way. But the decisions of the last two weeks, I think, represent a small but significant, tiny change. And so I had a sliver of hope that it might go this way, and it did,” he said.

“Immigration has been Trump’s central issue from his campaign through his policymaking as president. But consistently, polls show that the American public favors immigration reform.”
— Roberto Gonzales, HGSE professor

The judgment was an important win for DACA advocates, but it remains to be seen how the administration will react to it, and whether it will try to push back with an election looming and the political landscape potentially shifting, Gonzales added.

“Immigration has been Trump’s central issue from his campaign through his policymaking as president. But consistently, polls show that the American public favors immigration reform. They favor a legalization, and more so for something to be done for young people who don’t have legal status. And so I think that what perhaps we’re seeing here is pushback that is gaining momentum, a pushback against the kind of running rhetoric that’s coming out of the White House and the Trump policies.

“It will be interesting to see what advocacy looks like moving forward on this issue in the wake of the Supreme Court decision on LGBTQ, in the wake of the Black Lives Matter protests. Will we see more kinds of expansive, intersectional arguments and advocacy coming from immigrant rights groups? All of this is speculation, but I think today’s decision opens up a lot of possibilities.”

The White House did not have an immediate comment, but Trump blasted the DACA decision as well as Monday’s ruling on LGBT rights on Twitter. Calling them “horrible & politically charged decisions” he characterized them as “shotgun blasts” to Republicans and other conservatives.

Ximena Morales ’22 said that she thinks the next election will be a turning point for Dreamers. “I think November is going to be such a critical time,” she said. “I think it’ll be the deciding factor in how the future of DACA will play out.”

A rising junior, government concentrator, and co-director of Act on a Dream, Morales was born in Mexico and brought here as a toddler. She said she was always aware of her undocumented status and took pains to try to hide it from friends when she was growing up in southeastern Wisconsin. Being able to apply for DACA protection in high school changed her life, she said, and opened up important doors to work and education. 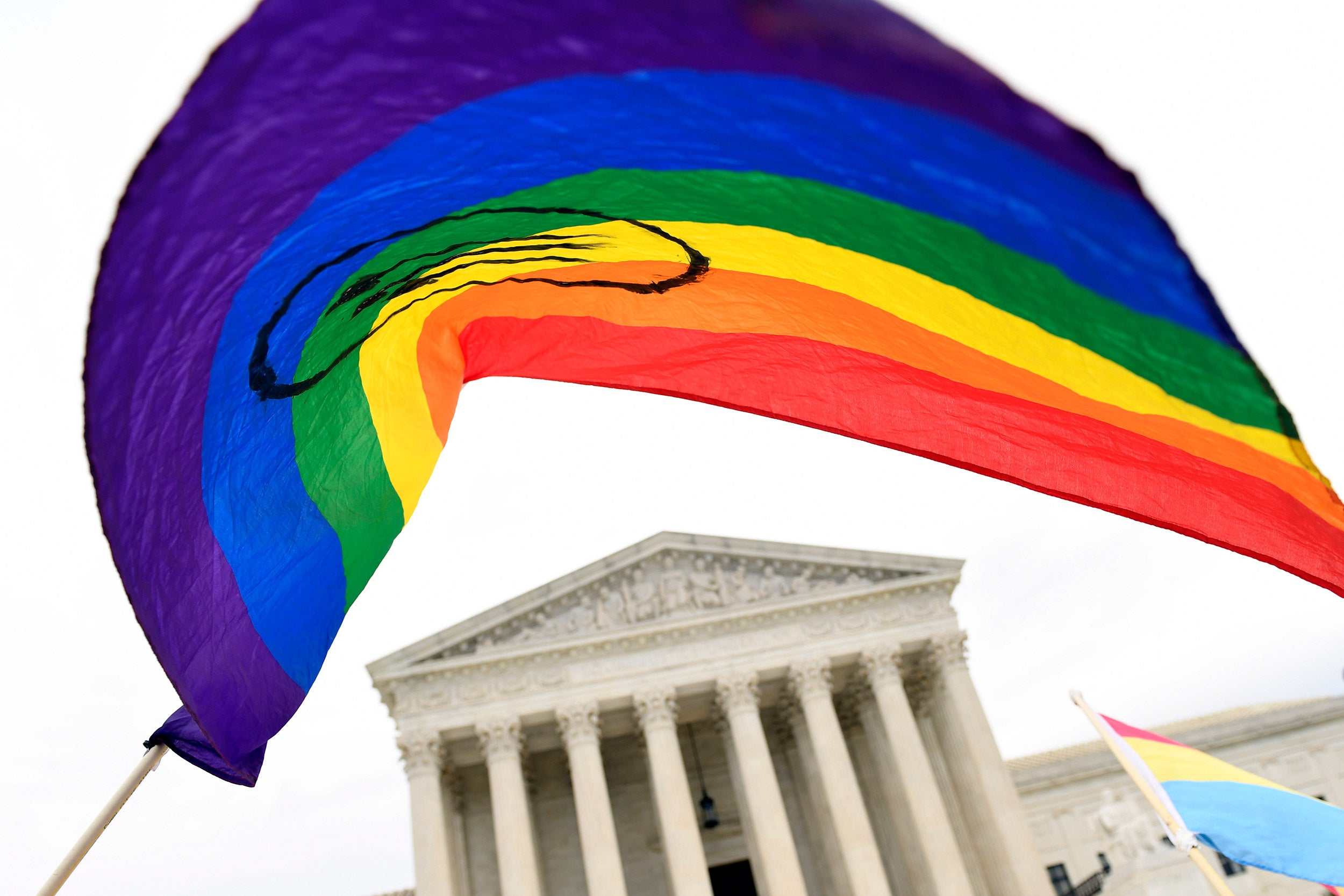 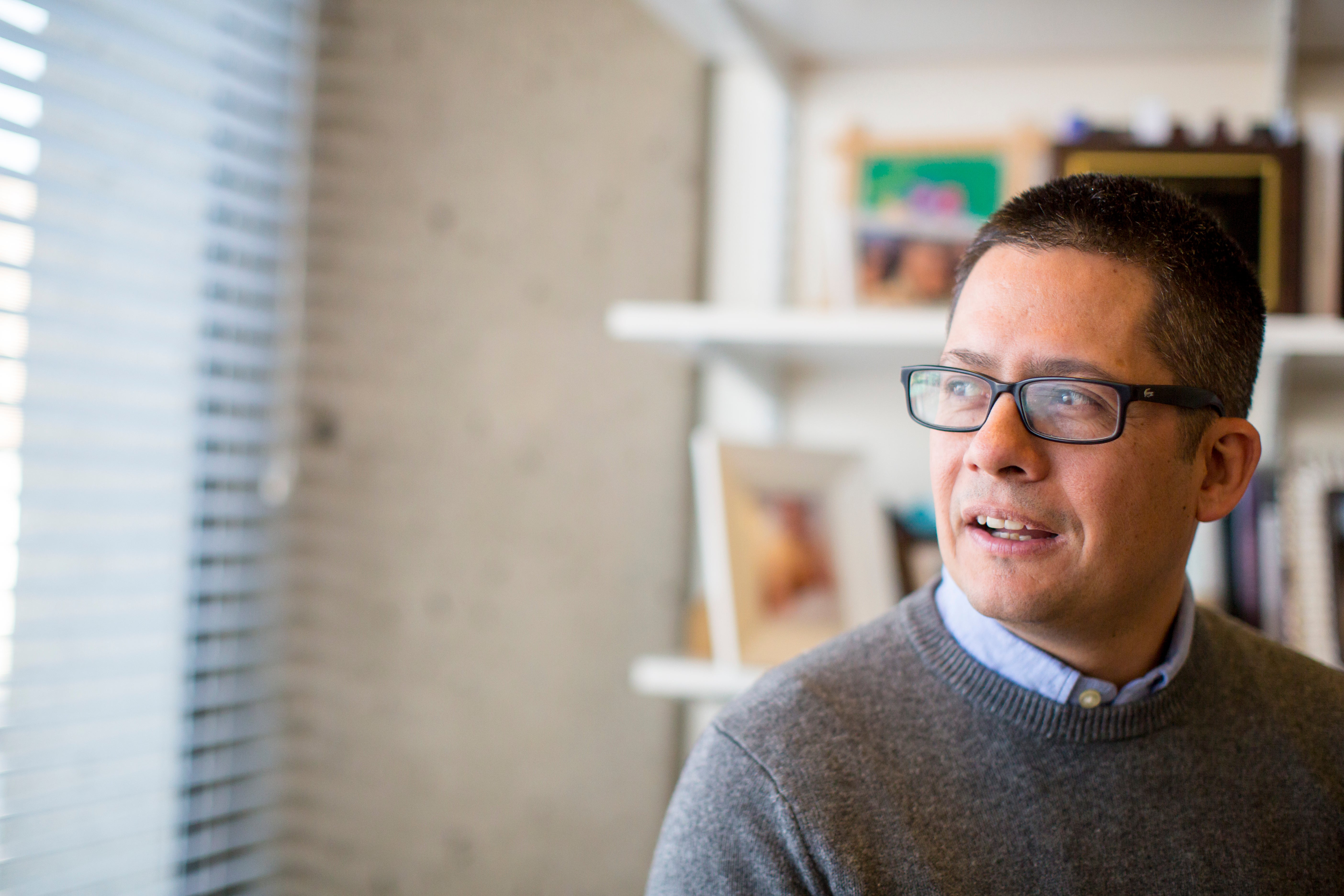 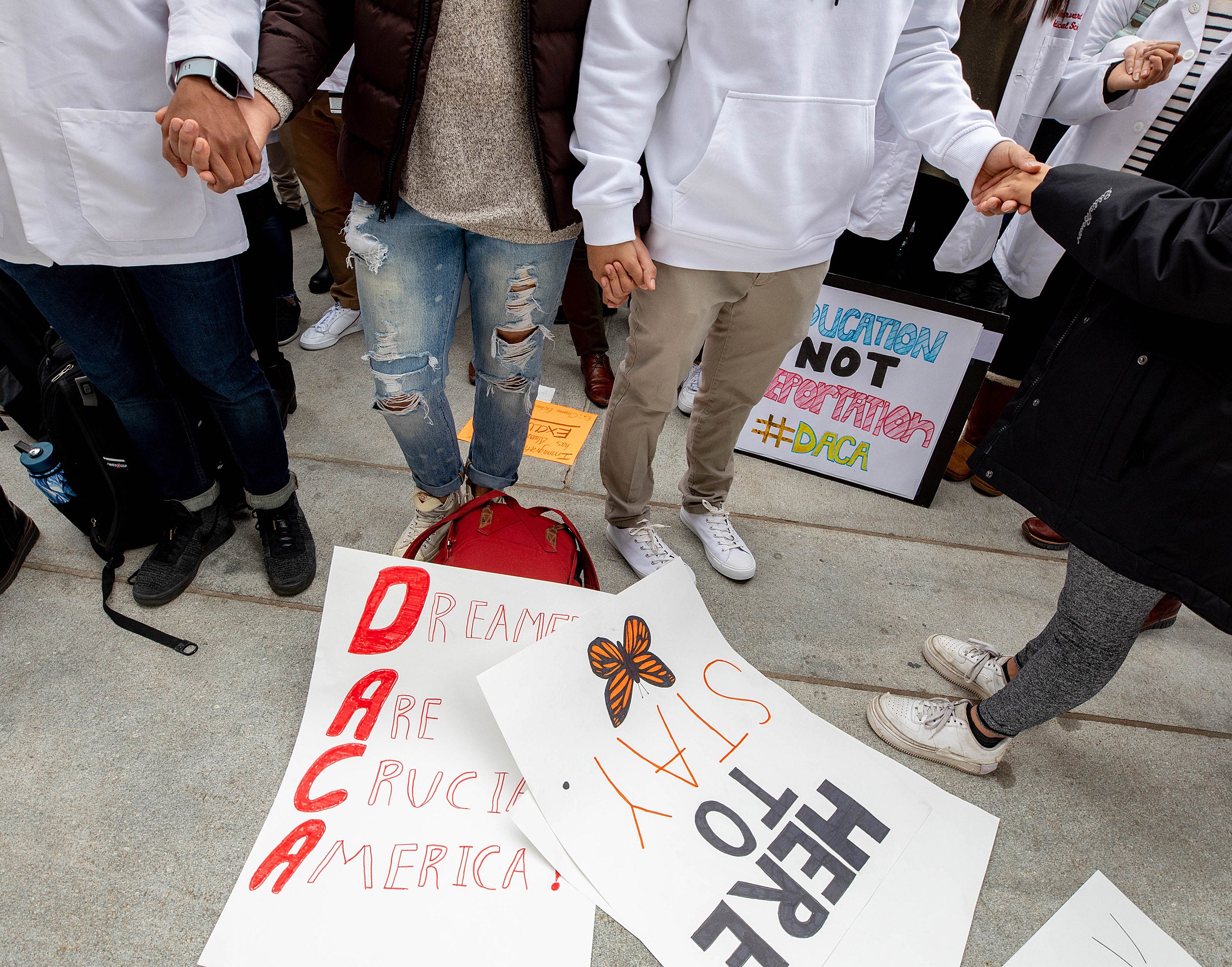 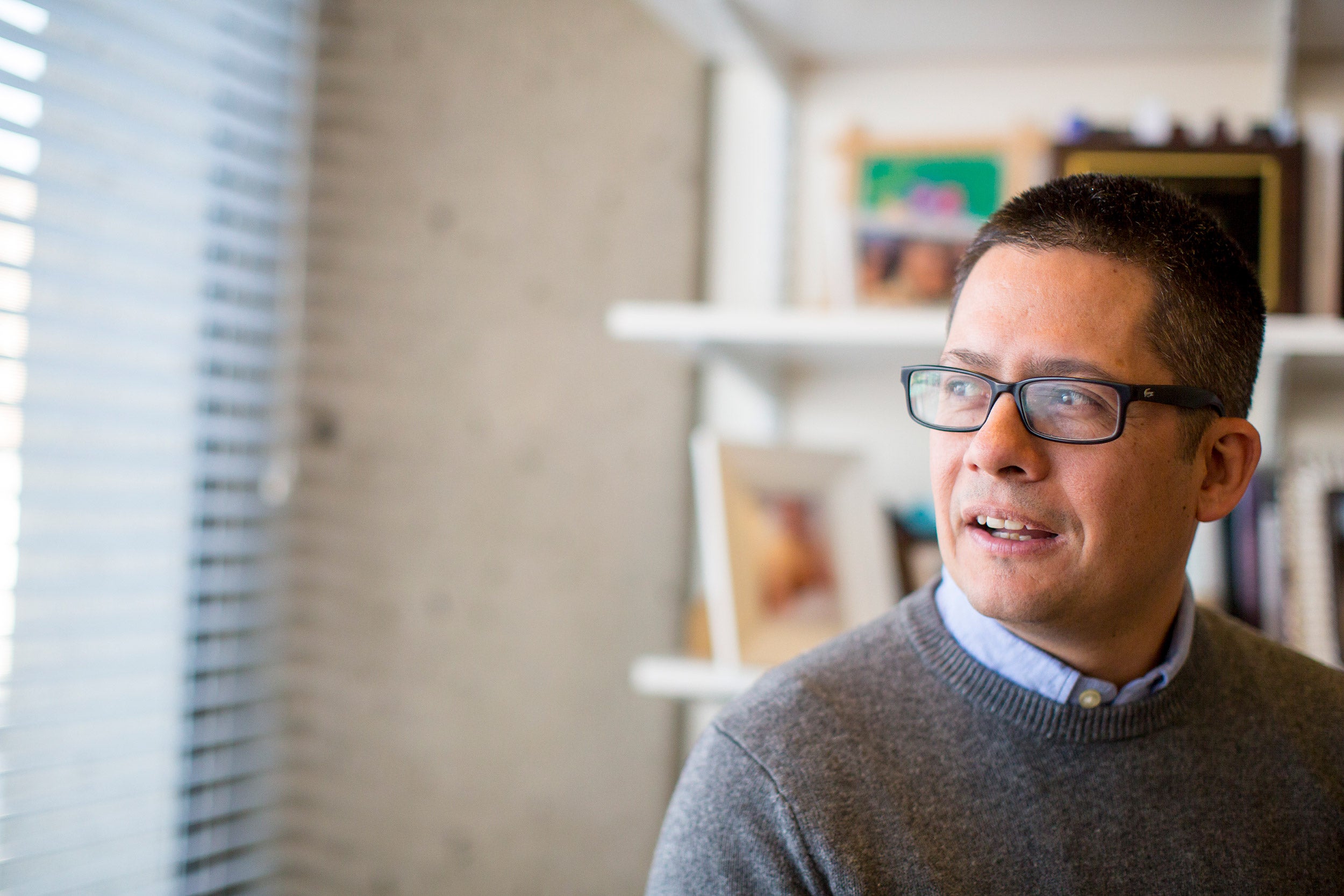 At Harvard Law School, Professor Sabrineh Ardalan broke down the decision, saying that the court found the administration hadn’t adequately explained why DACA was unlawful.

“The court says that if the administration wanted to end DACA, it would have had to engage in a much more rigorous analysis, including of the reliance interests at stake, and it didn’t provide a reasoned explanation for its decision. And so, its decision to end the program was arbitrary and capricious because it didn’t go through those steps,” said Ardalan, who directs the Immigration and Refugee Clinic at Harvard Law School, which helps hundreds of people with undocumented status through a range of programs.

“Ultimately, what DACA recipients need is a long-term solution on a path to citizenship. And so, my hope is that Congress can act to provide them with that, and not just DACA recipients, but also [Temporary Protected Status] holders and so many others.”

Earlier this month Bacow sent a letter to Secretary of State Mike Pompeo and Acting Secretary of Homeland Security Chad Wolf urging them to support nonimmigrant visas and their work authorizations, and reject attempts to restrict Optional Practical Training (OPT) and the STEM extension, programs that lengthen academic student visas.

Such programs offer students vital training opportunities, are critical to fields such as engineering and health care, and are essential to helping universities attract top candidates, said Bacow.