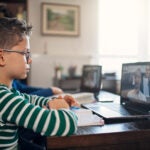 The Saturday after the 2016 presidential election, Harvard colleagues Theda Skocpol and Kathy Swartz, along with their husbands, met up at a favorite local diner for breakfast. As usual they discussed life and the NFL, but they also talked about what the vote might mean for America’s political future and for federal policies that had been central to the Obama administration.

Before the meal was over Skocpol and Swartz had crafted a research idea: travel to eight counties in four swing states — North Carolina, Pennsylvania, Ohio, and Wisconsin — and talk to people on the ground to find out. Later that day they recruited Harvard sociologist Mary Waters and soon their plan was in motion. Within weeks, they had raised seed funding from the Malcolm Wiener Center for Social Policy at Harvard Kennedy School and organized a group of Harvard undergraduate and graduate students to help.

They then took their show on the road, with Skocpol looking hardest at immigration, local Trump-resistance groups, and the opioid epidemic, and Swartz focusing on health-related issues, including mental and behavioral health care, as well as substance-use disorder treatment.

For the past three and a half years, Skocpol has taken the lead on what the group has named the Eight Counties Project. The Victor S. Thomas Professor of Government and Sociology has logged thousands of highway miles, sometimes with her husband, Bill, a retired physicist, sometimes with junior research partner Caroline Tervo ’18. She has been connecting with leaders of local political parties, police departments, and church, business, and community groups, piecing together a picture of how changes in national politics are playing out at the local level.

The ground game is a familiar one for Skocpol, the former President of the American Political Science Association, who crisscrossed the country several years ago attending meetings and interviewing members of conservative political groups for her 2011 book, “The Tea Party and the Remaking of Republican Conservatism,” with co-author Vanessa Williamson.

In both instances, she said, “The goal was to get to know these places, find out what’s going on, and get a sense of how local leaders see national changes.”

After nearly four years of repeated trips to the four states during summer vacations and breaks in the academic year, a complex picture started emerging.

Skocpol said the immigration question has been intriguing. “It’s about policy issues driven from above that are filtering down in distinctive ways,” she said. “And it’s really interesting because of the ambivalences that I hear.”

In his 2016 campaign, Donald Trump made limiting immigration a signature issue. Just days after being sworn in he signed a range of executive orders that took aim at sanctuary cities, called for the construction of a border wall with Mexico, and restricted travel to the U.S. by refugees and citizens from seven Muslim-majority countries.

Since then he has also moved to repeal the Deferred Action for Childhood Arrivals policy introduced by President Barack Obama that postpones deportation of individuals illegally brought to the country as children (the case is currently before the U.S. Supreme Court), and ended temporary protected status for thousands of immigrants from countries affected by conflict or environmental disaster. Last summer, Trump also supported nationwide raids targeting undocumented immigrants that were carried out by Immigration and Customs Enforcement officers.

Some longtime Republicans told Skocpol they are deeply troubled by how those raids are affecting local families and disrupting industries that rely on immigrant labor.

“While some people look at me with a steely eye and say they don’t care, and that you have to follow the rules, others are clearly more troubled by what has been happening,” said Skocpol. “That’s something best captured not just in what they say but how they look like they are feeling. That’s what you see by being face to face with people.”

Still, Skocpol doesn’t anticipate people breaking with the party over the immigration issue any time soon. “What they are going to do is hope that they don’t ‘take the ones I know,’ or ‘don’t disrupt my business or my community,’” she said. “At least, so far that’s what I’ve heard.”

Swartz traveled earlier on in the project, meeting with health-care providers and community health organizations and members of foundations that help provide additional health-care funding at the local level. From her work, Swartz, an adjunct professor of health policy and economics at the Harvard T.H. Chan School of Public Health, said she sees the opioid epidemic as part of a set of broader health-care challenges.

“This was part of a larger issue related to mental health, and the real disparities in treatment options for people with substance-use disorders,” she said. “Those disparities are tied to the funding uncertainties from the federal government, which in turn affects state Medicaid programs. Together these things are having a real disruptive effect on these communities.”

Many health professionals, said Swartz, told her they feared that proposed cutbacks to Medicaid could leave patients without coverage or limit their access to counseling and medications for mental illness or chronic conditions such as diabetes. In January, the Trump administration announced the Healthy Adult Opportunity initiative. The program, they say, gives states more flexibility in how they administer Medicaid programs, allowing them to focus on the most vulnerable populations. Critics see the new effort as a way to shrink Medicaid rolls and benefits and further undermine the Affordable Care Act.

In addition to their concerns about health care, interviewees told Swartz they were equally worried about education and jobs.

“From health care they would jump right to the education issue and say, ‘We need better pay for our teachers so that we keep them. We need to make sure that the kids who are smart and go off to college come back here,’ they said, zeroing in on the fact that they need to remain attractive to good employers.”

It also gave her a newfound appreciation for digging in at ground level.

“I have learned a couple of things that in all of the analyses I have done for over 30 years of the uninsured or about Medicaid I never would have thought of without going out and talking to people,” said Swartz. “For example, in one of the counties the community hospital for the first two years of the Affordable Care Act didn’t accept reimbursements from the ACA plans sold in the county. I would never have known that unless I had been there.”

Skocpol also knows that groundwork is vital. She said her repeated visits to the eight counties continues to help her build important relationships.

For some, the idea of a Harvard professor reaching out to interview people in red-leaning areas may seem like courting trouble. But Skocpol assured students at a recent discussion that most people were eager to discuss their views. In fact some of the group’s recent findings were used in her new book, “Upending American Politics: Polarizing Parties, Ideological Elites, and Citizen Activists from the Tea Party to the Anti-Trump Resistance,” co-edited with Tervo.

“I think almost any student from Harvard can get people’s attention by showing respect and interest,” said Skocpol. “A little respect goes a long way and that’s true across the board.”

The book explores the changing shape of political organizations both at the national level and in swing states, and devotes several chapters to the emergence of grass-roots resistance groups in the wake of the 2016 presidential election. Skocpol, Tervo, Leah Gose (a Harvard doctoral student in sociology involved in the project), and others found that the resistance groups are in both the red and blue areas they have studied. They also found such groups support new left-leaning candidates for local, state, and national offices, are social media-savvy, and are primarily made up of middle-aged or older, white, college-educated women.

“That wasn’t an obvious discovery because I didn’t expect to find that in these very conservative places,” said Skocpol. It’s too soon to tell how such groups could affect the upcoming election, she added, but they “did boost Democratic candidates in November 2018” during the midterms.

Skocpol has been collaborating with undergraduate and graduate students throughout the research, and encouraging them to conduct similar field visits for their senior theses and professional papers.

Junior Eliza Oehmler is currently working on the Eight Counties Project and monitoring local resistance groups “looking at a lot of social media presence, seeing who is active, who is not, what they are focusing on and how that relates to 2020.” She also contributed to the chapter in Skocpol’s new book about the strategies employed by former U.S. Rep. Beto O’Rourke during his run for the U.S. Senate in 2018, a race he narrowly lost to incumbent Ted Cruz.

Harvard senior Matt Kind signed up to be a research assistant in 2018. “I saw this project as a great way to learn more about the opioid epidemic and more about my community and how we are handling it,” said Kind, who hails from Monroe County in Wisconsin.

In an interview last year, Kind said he spent hours poring over local newspaper articles and identifying potential interviewees. He also tracked rates of addiction, overdoses, and suicides, and studied policy interventions as well as the challenges facing public health officials and behavioral health clinics in the area. Kind said he was shocked by the scope of the epidemic, by the time it took for officials to respond, and by the rippling effects of the crisis.

“Particularly in Wisconsin, it’s young people who are really being affected by this. They are in their 20s and 30s, the prime age to get a job and start a family,” said Kind. “It’s been really surprising because a lot of this has been happening in my backyard.”

While many agree to be interviewed, getting them to open up can be a challenge. In Skocpol’s case it didn’t hurt that she shared a passion with a number of her interviewees. A diehard football fan raised in the Midwest, Skocpol often used that connection to smooth the way. “The fact that I know their team, and I know the issues, and I know the plays, that helps. And it takes the edge off the Harvard and the liberal part.”

Still, she’s always prepared for pushback. During one early exchange, a conservative-minded skeptic asked her pointedly, “Do you believe America is an exceptional country?”

“I said, ‘I absolutely do,’ and that ended the conversation right there,” said Skocpol. “He wanted a fight, and there wasn’t a fight to be had.”