Rising above a biased system he’s now determined to change 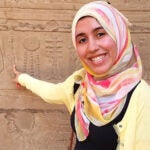 When Kwame Adams told his high school guidance counselors that he was applying to Brown University, they laughed. He was smart — the valedictorian of his class; but he also was from Mattapan, a neighborhood of Boston often painted by low expectations. Even though Adams wasn’t accepted at Brown, he spent the next decade thinking about that moment, letting it shape his teaching.

“Students internalize a lot of those messages,” he said.

Deconstructing the negative messaging toward students of color would be part of what drove Adams later as a math teacher for a Boston charter school. “I never questioned [my students] or their ability based on their ZIP code,” he said.

As Adams prepared to graduate with a master’s degree from the Harvard Graduate School of Education (HGSE), he reflected on his own educational experiences.

As a first-generation college freshman focused on medicine, he struggled in biology and was taken aback when administrators immediately tried to label him with a learning disability rather than troubleshoot the problem. “I never felt so poor. I never felt so black. I never felt so dumb,” he said.

After graduating from Wesleyan University, he got to work as a middle school math teacher for a Boston charter school. But his optimism faltered upon experiencing the inner workings of school systems, particularly how the discipline directed toward black and brown children too closely mimicked that of the prison system, he said. “When you went into the detention room, 90 percent of the students were black men.”

During those “unhealthy” first few years of teaching, Adams said, he swelled to 300 pounds and his pants size doubled. “It bothered me to see the way the students were building a negative relationship with schooling and learning.”

Still, Adams didn’t join the nearly 50 percent of teachers who leave the profession within five years. He only committed more to the work. “If I just sit there and don’t say anything or do anything about it, then I’m just allowing those inequities to persist and continue,” he said.

Although he did find another teaching position that aligned more with his beliefs, he still encountered negative attitudes toward children of color. Many biases echoed Adams’ own experiences as a student; despite doing well academically, he says, he was often criticized for having an “attitude” problem by the adults in school.

What educators often forget, he said, is the human aspect of teaching — asking students why they are upset, whether something is bothering them at home, or whether they have the necessary tools to get the work done.

What kept Adams going through his own school days was the support of his mother and grandmother. He also credits the Crimson Summer Academy — a Harvard program that allows motivated high school students to gain a taste of college life — as a game-changer for him. Spending his summers as a teenager on the Harvard campus gave him the tools to recognize that he could be “black and smart” and that “someone could appreciate both.”

Despite his firsthand exposure to Harvard, Adams couldn’t imagine attending the University one day. But he decided to give it a shot when applying to graduate school.

“There was this little kid in me, that 16-year-old who got laughed at when he said he was going to apply to Brown, and then got that rejection letter, and felt, ‘Wow. Maybe they were right,’” he said.

He contrasts that memory with the satisfaction he felt upon being accepted to HGSE.

But even better than getting accepted was telling his students. Some cried. Some were happy. “Some still didn’t believe me until September, when they came to school and realized I wasn’t there,” he said, recalling how he sent them a picture of himself on the Harvard campus. “Despite me having to leave them for a year, they now know that this is attainable, because I’m from the same streets,” he said.

Next year, Adams plans to pivot from classroom teaching into a leadership role where he can help educators develop cultural competency, make sure all students feel welcome and see their potential, and recognize their biases. Adams can’t think of any better place to begin this work than where he’s from.