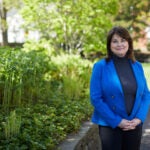 After 44 years at Harvard, Bob Scalise retires as athletics director, capping a tenure of accomplishment and change

Bob Scalise reckoned that he’d be Harvard’s athletics director for eight to 10 years. It’s now been about 19, and he’s still at his desk overlooking the stadium. “It became a different job all the time,” he said. “It never seemed like: ‘Here we go again. Let’s dust off the September to-do list.’ That’s not how I looked at it. Each year it was something different and exciting.”

This one was undeniably different. The COVID-19 pandemic triggered the closure of campus, migration of classes online, and a halt to intercollegiate sports for the remainder of the semester. And the end of this academic year will mark the retirement of the 69-year-old Scalise, capping a tenure full of accomplishment and change — and the longest since that of the first, Bill Bingham, who served from 1925 until 1951.

“It is through Bob that I have come to understand and appreciate the mission of Harvard Athletics, and its profound positive impact on the lives of our students and on the life of this University,” said Edgerley Family Dean of the Faculty of Arts and Sciences Claudine Gay. “Bob has been a steward of the mission for his entire career, a steadfast believer in the ideal of education through athletics and the value of the Ivy League. That commitment has been inspiring but also grounding, especially in moments of challenge.”

As John D. Nichols ’53 Family Director of Athletics, Scalise oversaw 42 men’s and women’s varsity teams; nearly 60 club programs, from boxing to Quidditch; 27 intramural sports, and a recreational fitness system spread across 10 facilities. He also increased the ranks of women and minority coaches, mentored generations of players and coaches, established pay-equity procedures, and steered the program’s growth amid various challenges, all the while guided by a sense of mission as an educator.

Scalise has been involved with the University for 44 years as a head coach, Harvard Business School student, and executive. When he first arrived in 1974 as the league’s youngest lacrosse coach at 24, the Harvard-Radcliffe merger was not yet underway, Title IX’s impact on college sports had not yet begun, and the University’s athletic facilities were outdated.

Now there are about as many female undergraduates as male and 21 women’s sports. Specialization by athletes, longer seasons, and off-season training now are the standard. Ice hockey begins in October, lacrosse in February. The physical plant on both sides of the river has been expanded and modernized. And a department once housed in a warren of offices at 60 John F. Kennedy St. has expanded to more than 100 staffers at the more expansive Murr Center across the Charles.

“When you consider the scope and the challenges of managing the largest Div. 1 program in the country, I think Bob did a terrific job,” said Tim Murphy, the Thomas Stephenson Family Head Coach for Harvard Football. In Scalise’s time as AD, Crimson teams won 25 national championships and 148 Ivy titles from football to fencing.

“Adjust and adapt” has been Scalise’s maxim. “That’s one of the great lessons of athletics,” he said. “This is a different Harvard than existed 20 years ago. How do we be true to what we’re trying to do with athletics and pursue excellence and value the richness of the diversity of the kids on our teams?”

Scalise has kept pace with the changes both in the University and athletics. He has deepened the department’s expertise in marketing, multimedia, and information technology. And he has been committed to creating more diversity atop team rosters, recruiting five female and three black head coaches. “I was a high school coach with no college experience,” said Ted Minnis, who was working at a California girls’ school when Scalise hired him. He now has directed the men’s and women’s water polo teams for a decade and is the winningest coach in the program’s history. “He saw something in me,” he said.

The big board behind Scalise’s desk, which has been there since his arrival, spells out in detail the department’s operating principles: “Adhere to the highest standards of integrity, ethics, and sportsmanship. Attract and develop people of outstanding capabilities. Grow and manage the department’s resources wisely.”

“It’s a roadmap to success for Harvard athletics,” said Merrimack athletics director Jeremy Gibson, Harvard’s former senior associate AD who worked with Scalise for a dozen years. “The headers might change, but the pillars always remained the same.”

The Ivy model as it was conceived 66 years ago is based on the notion that the purpose of intercollegiate sports is to contribute to the larger educational mission, and that athletes should be treated like any other student. “Bob’s not going to make a big proclamation about what we’re going to do,” said Gerrie Mahoney, who arrived at Harvard a year before Scalise and now is senior associate AD. “He finds a way to weave it in so that it becomes part of the fabric.”

Scalise learned the model at Brown, where he was a two-time All-American in lacrosse. He directed the men’s varsity at Harvard for 13 years and was the first coach for the women’s soccer team, a job he kept for a decade. His wife, Maura Costin ’80, was an All-Ivy swimmer who coached the women’s varsity for 13 seasons.

Scalise spent nearly a decade at HBS, ultimately as senior executive officer, and three years at Bain Capital, where he was director of recruiting, career development, and alumni relations — his only foray away from Harvard since his arrival. “He treated different situations as case studies,” said Gibson. “How are we going to deal with it and what are we going to learn from it going forward?”

The Scalise approach is data-driven and objective. “Bob does not get rattled and is the consummate problem-solver,” said Jenny Allard, who has coached the softball team for more than a quarter century. “He has great insight.”

Scalise’s extensive coaching background at Harvard has made him an empathetic adviser. “Bob and I had a good relationship,” said Murphy. “I appreciated him, and I think it was mutual. Having a coaching background certainly didn’t hurt his ability to have a fair understanding of what was important in hiring and in managing coaches. I absolutely believe that was an asset.”

“I feel very lucky to have had Bob as a partner in the first two years of my deanship, and luckier still that I’ll continue to have the benefit of his advice over the next year.”
— Claudine Gay, Edgerley Family Dean of the Faculty of Arts and Sciences

His experience in directing the transition of women’s soccer from a club team to an immediate Ivy champion was particularly helpful to the women’s rugby squad, which won last year’s national title in only its fourth season as a varsity. “As a younger team it was especially meaningful that Bob made sure we always had what we needed to be successful and gain that momentum,” said coach Melanie “Mel” Denham, whom Scalise hired in 2017.

At coaches’ gatherings Scalise is appreciated for his dry wit. A decade ago he agreed to invest in a state-of-the-art infield surface for the softball team. “To this day he gives me a hard time that it was the most money he has ever paid for dirt,” said Allard.

Scalise has an educator’s knack for getting to the essentials. “Bob has a masterful way of simplifying things so that everyone can understand it, and it sticks,” said Mahoney. “He says, ‘We’re in the business of developing people.’ Bob’s the coach of all of us.”

As Harvard Athletics approaches the centennial of its founding, Gay commissioned a study, which is being handled by Mercer, that will examine Harvard’s student-athlete experience, program culture, and departmental structure, and will inform strategic planning for the next decade.

After he retires, Scalise will spend another year as adviser to Gay. The University recently named as his replacement Erin McDermott, director of athletics and recreation at the University of Chicago. 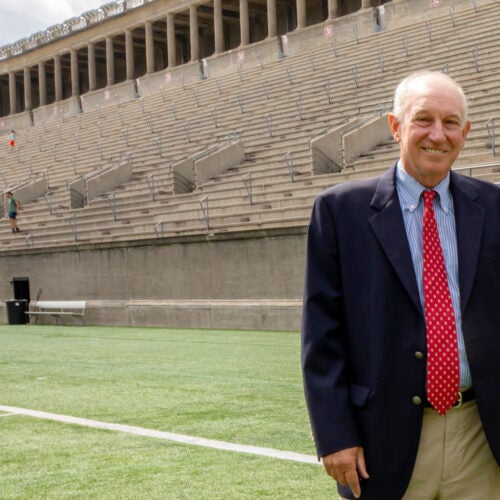 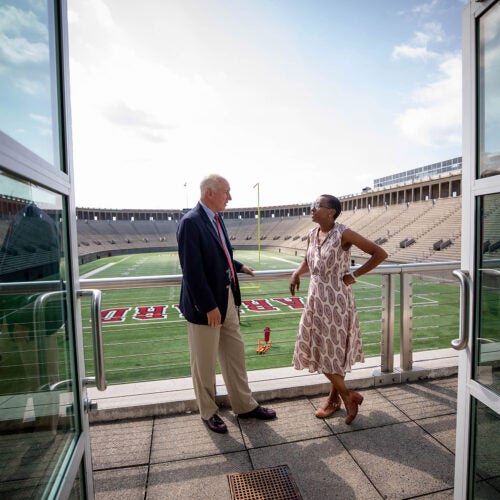 “I feel very lucky to have had Bob as a partner in the first two years of my deanship, and luckier still that I’ll continue to have the benefit of his advice over the next year,” said Gay.

For Scalise, who served under three University presidents, the decision to retire now was part of a life plan. “I always envisioned I would work until I was 69 or 70,” he said. “It’s still a time when people feel young and vibrant and can do a lot of things. I want to enjoy that with my family and not run out of time.”