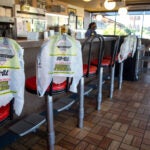 Harvard economist’s work focuses on the lasting effects that conflicts, economic conditions, and institutions can have on a society

Harvard economist Melissa Dell, who studies the long shadow economic history casts on societies, has received the prestigious John Bates Clark Medal. The prize, administered by the American Economic Association, is awarded annually to an American economist under the age of 40 for making significant contributions to thought and knowledge in the field.

Dell, 37, examines how long past conflicts, economic conditions, and institutions can have lasting impacts on a nation. She uses empirical evidence to quantify those effects. Her research, which has focused largely on Latin America and Southeast Asia, ranges from work on how forced labor in Peru and Bolivia from the 1500s to the 1800s has conditioned current development, to how policies enforced by the Mexican government against the country’s illicit drug trade has changed patterns of violence and trafficking and affected local economic development.

“One of the key questions I am trying to better understand is how poverty and insecurity can be so persistent over time and the challenges that society faces in trying to counter them.”
— Melissa Dell

“Through her pioneering, careful, and creative data collection and empirical work, Melissa Dell has advanced our understanding of the role state and other institutions play in the daily lives of and economic outcomes of ordinary people. In doing so she has also given a new energy and direction to the entire field of political economy and development,” reads the AEA statement announcing the award.

Dell ’05, who earned a master’s as a Rhodes scholar at the University of Oxford, said she was thrilled that the award recognizes not only her work but also her field of study.

“This recognition shows that people are interested more broadly in the sorts of questions that we study in the political economy of development. I think it’s really exciting for the field and for the sorts of questions that we think are really important,” said Dell. “For me, one of the key questions I am trying to better understand is how poverty and insecurity can be so persistent over time and the challenges that society faces in trying to counter them.”

Harvard helped set her on the path to studying economics said Dell, now a professor in the economics department, who arrived on campus in 2001 as a freshman unsure what the field of study entailed. It wasn’t long before she was hooked. “I think it was a combination of being able to take really fantastic classes and being introduced to what research is and the sorts of questions that economists think about that really fascinated me,” said Dell.

That fascination eventually won her the John H. Williams Prize, which recognizes the best Harvard undergraduate student in economics, and the Seymour Harris Prize, awarded to the best undergraduate thesis in the department, for “Widening the Border: The Impact of NAFTA on the Female Labor Force in Mexico.”

Study-abroad programs to Peru and Chile also offered Dell a chance to engage with the wider world.

Looking to the future as the global economy tries to recover from the devastating effects of the coronavirus pandemic, Dell said her work and research could help highlight some important truths.

“Part of what I try to think about is how you build trust in the state. And that’s also really fundamental to thinking of things like trust in science, because trust in broader institutions tend to go together more generally,” she said.

In addition, Dell said her work examining how certain societies have responded to economic shocks over time underscores “the importance of a safety net that can help reorient employment in times of crisis.”

Dell’s work has drawn several honors in recent years. The Economist magazine named her one of the decade’s top eight young economists in 2018; she won the Calvó-Armengol International Prize, awarded to a top economist under the age of 40 by the Barcelona Graduate School of Economics and an Andrew Carnegie Fellowship in 2017; the International Monetary Fund named her one of the 25 economists under the age of 45 shaping thought about the global economy in 2014.