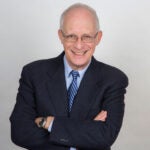 At a Meeting of the Faculty of Arts and Sciences on March 3, 2020, the following tribute to the life and service of the late Lawrence Elwood Stager was placed upon the permanent records of the Faculty.

Born in Kenton, Ohio, Larry Stager, Dorot Professor of the Archaeology of Israel, Emeritus, and former Director of the Semitic Museum, died Dec. 29, 2017, shortly before his 75th birthday. He came from a farming family, the first to attend college — at Harvard. The transition could be epitomized onomastically: his given name was Larry, but he thought it too homey for Harvard and reconfigured it as Lawrence, even Lawrence E., though he always preferred Larry.

For Larry, Harvard was a new and initially frightening experience. But by his sophomore year, sparked by the work of archaeologist Nelson Glueck, he found a true love in the archaeology and history of the ancient Near East. That love was nurtured by the galaxy of faculty in the Department of Near Eastern Languages and Literatures, particularly G. Ernest Wright, Frank Moore Cross, Thomas Lambdin, Thorkild Jacobsen, and visitors Nahman Avigad (Hebrew University) and Roland de Vaux (École Biblique). He wrote his honors thesis under de Vaux on burial practices in ancient Israel and graduated magna cum laude with highest honors in 1965.

In the year following at the Hebrew University of Jerusalem, Stager encountered field archaeology first-hand and made his first discovery, an archaic Hebrew inscription he published in 1969 at Cross’s encouragement. Returning to Harvard for his M.A. and Ph.D., he continued archaeological field work: at Tell el-Hesi and the Wadi Buqe‘ah in Israel and at Idalion in Cyprus, where in 1971 he became co-field director with Anita Walker. The Buqe‘ah was the subject of his doctoral dissertation, completed, with distinction, under Wright and Cross in 1975.

In 1973 Stager began teaching Syro-Palestinian Archaeology at the University of Chicago, and over the next decade, he rose to full professor. To his excavations at Idalion he added the field directorship at Carthage, Tunisia, in 1975. Then in his last year at Chicago, he began a new archaeological project at Ashkelon, Israel, which lasted through his return to Harvard in 1986 as the inaugural Dorot Professor of the Archaeology of Israel in the Department of Near Eastern Languages and Civilizations, the first such professorship in the United States. In 1987, he became director of Harvard’s Semitic Museum, reorganizing it and introducing new exhibitions, and in 1991, his teaching appointment was extended to the Department of Anthropology. Stager remained at Harvard until his retirement in 2012.

In scholarship and teaching, Stager showed himself a master of all the technical skills of archaeology, especially pottery analysis, a fundamental instrument for dating archaeological strata. But more than a technical master, he was an historian who understood archaeology as an historical discipline. With his broad background in intellectual and social history and his command of anthropology, he was ideally positioned for the changes in Near Eastern archaeology in the late 1960s and 1970s. His approach centered on problem-oriented research designs, which integrated social and natural sciences.

Exemplary of this approach was Stager’s doctoral dissertation on the Buqe’ah, where his excavation of a series of Iron Age forts and farms helped him understand the nature of irrigation agriculture in arid zones. His seminal article on the early Iron Age, “The Archaeology of the Family in Ancient Israel” (1985), was a virtuoso synthesis of archaeology, ancient demography, agricultural technology, comparative history, and close analysis of biblical and other ancient texts. His excavation in the Carthage “Tophet” resulted in an illuminating study of the religio-social implications of burial urns containing the cremated remains of infants — apparent human sacrifices — which in his provocative formulation embroiled him in a  controversy that continues. In 1999, he mounted an innovative deep-water archaeological project with explorer Robert Ballard to excavate two Phoenician merchant shipwrecks off the coast of Sinai.

Stager’s most complex undertaking was the excavation at Ashkelon, funded by the Leon Levy Foundation and Shelby White. It remains one of the largest and longest-running digs in Israel, with an extensive published record: seven of fourteen planned volumes have already appeared. Stager’s aim was the reconstruction of the lengthy history of this major port, charting its continuous occupation from the Chalcolithic (fourth millennium B.C.) through the medieval Islamic (early second millennium A.D.) periods. Ashkelon was also the point of departure for several of Stager’s far-reaching studies. One was his 2001 analysis of how maritime coastal polities like Ashkelon operated economically and politically, exercising what he termed “port power” over against land-based and landlocked polities. A second group of studies concerned the Levantine Iron Age (the 12th–10th centuries B.C.), in which he convincingly synthesized early Israelite history and disentangled the complexities of the archaeology and history of their rivals, the Philistines.

On a wider plane, Stager’s “Life in Biblical Israel” (2001), with Philip J. King, mounted a major argument for Biblical archaeology as a full-fledged scholarly enterprise. Here was a comprehensive portrait of daily life in Iron Age Israel grounded in a probing demonstration of how history could be gleaned from a sophisticated integration of the evidence from the Hebrew Bible and the material culture of archaeology.

Stager’s broad scholarship also shaped his teaching. At Chicago and Harvard, he built formidable programs, comprehending not only the ancient Near East but also anthropology, classical archaeology, history, and religious studies and attracting over 50 students from across North America and beyond. Ashkelon, especially, became a training ground for a new generation of archaeologists, including those he prepared to complete his work there, even as he encouraged them to begin their own excavations at other sites. Throughout, Stager was a forceful personality, with high standards. Unafraid of controversy, he liked nothing better than a well-articulated, solidly supported argument.

Stager’s significant achievements merited significant recognition, including election to the Austrian Academy of Sciences, the Irene Levi-Sala Book Prize and the Percia Schimmel Prize for distinguished contributions to archaeology in Israel and neighboring lands, two festschriften, numerous named lectureships, and editorial memberships on the boards of many professional journals and societies.