The war against colonial slavery 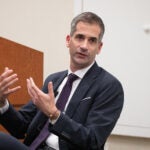 History typically is written by the victors. But in his new book, “Tacky’s Revolt: The Story of an Atlantic Slave War,” Vincent Brown gives this something of an ironic twist. The Charles Warren Professor of American History and Professor of African and African American Studies reads between the lines of the records and correspondence of colonial military leaders and plantation owners to get into the minds of those on the other side of the largest rebellion of enslaved people in the 18th-century British Empire. Over the course of about a year starting in 1760, more than 1,000 in Jamaica rose up in a series of insurrections that Brown views not as isolated acts, but as operations in a wider guerrilla war against colonial slavery. Using cartography and military analysis, he traces the revolt, its leaders, and its suppression from the Gold Coast of Africa to Jamaica. On Monday, Brown will discuss the book as part of the 1776 Salon series at the American Repertory Theater.

GAZETTE: Why was Tacky’s Revolt an ideal focal point for your book?

BROWN: Not many people outside Jamaica, who aren’t historians of the British Empire, know about this revolt. But those who do generally call it Tacky’s Revolt, named for one of its known leaders who came from somewhere in the area of West Africa that is now Ghana. Tacky was named in the first news accounts of the uprising, then identified as the mastermind of the entire event by the planter and historian Edward Long, who published a three-volume history of Jamaica in 1774. But in reading the sources produced during the insurrection, it was clear that there were many other leaders, and that Tacky was part of a much larger military campaign against colonial slave society by survivors of the slave trade from the Gold Coast.

I knew I needed to connect what was happening in West African politics, state-building, and warfare to what was happening in Jamaica. On the Gold Coast, there were many African polities vying for power among each other. Their soldiers would be captured and sold to Europeans, and they would often regroup once they crossed the Atlantic because they spoke the same language or worshipped the same deities. Then, they staged revolts against plantation owners.

I began to see as I mapped out the revolt in the Jamaican landscape that it was integrated with West African history and was a much larger, overall Coromantee [the name for the rebels] war that expanded across the Atlantic. That’s about a century of historical currents, which eddied into this revolt that took place over a year in Jamaica.

“Even though I know it’s sometimes controversial to use the word ‘slave,’ the word needs to be opened up. I don’t use the word as if it were a fact.”

GAZETTE: What prompted you to write this book now?

BROWN: I first got the idea for this book around 2005. The United States was a year and a half into the latest version of the Iraq War. It was pretty clear that the insurgency was gaining strength, and while I wasn’t trying to draw a strict parallel or write an allegory of that war, I was thinking about how the strongest military force in the history of the world was already losing. I was already writing about the history of slave revolt, but this thinking about the terror wars that followed Sept. 11 [2001] gave this book a different kind of shape. That really reframed my thinking of slave revolt as perpetual, never-ending warfare between loose impromptu militias and powerful military forces.

Looking back, a lot of those ideas come from the fact that I grew up in San Diego during the Cold War in the 1980s. The Navy and the Marines are big institutions in San Diego, and by the late 20th century, it was one of the largest military garrisons in the world. My father, uncles, and grandfather had all been in the military, and many of my friends joined as well, so thinking about the military was something I was interested in, and studying slavery and militancy as the geopolitics of warfare was a natural fit.

GAZETTE: What were some of the challenges that you faced while researching and writing from this geopolitical perspective?

BROWN: Once I reframed slave revolt as warfare, I began to see things in the sources that I might have overlooked before, because the rebels didn’t leave many sources. I had to read their actions and intentions through the sources of their enemies. What I knew came from the planter Edward Long, and another planter named Brian Edwards who wrote another account about 20 years after Long’s was published. We had some newspapers, diaries, and correspondence, and military records, but these histories were written by people who hated the rebellion and hated black people, and wanted to suppress their slaves forever.

In order to get a sense of what actually happened, I had to get beneath the descriptions by the slave holders. I decided to plot everything I knew on a timeline, using every single source, and tried to locate it in time and space. I worked with a group called Axis Maps doing animated cartography online, and we made a map of the revolt. It was the first map that showed how the revolt played out, moment by moment, over time. And from that map, it was a little easier to discern what the rebels wanted to do and how they were responding to the insurgent forces. That gave me more insights into how the rebels saw and sought to use space, which isn’t obvious from looking at the textual sources alone.

GAZETTE: How does a story like this help readers understand the personal histories of enslaved people?

BROWN: An enslaved person is a human being no matter the ideology or the law, or how much violence is used on someone to make them a cypher, or a mere extension of a master’s will. There’s always something else there — experience, desires, a world, history — and when we begin to take those things seriously, this kind of story emerges. Even though I know it’s sometimes controversial to use the word “slave,” the word needs to be opened up. I don’t use the word as if it were a fact. All the slaves I see in my research are enslaved people. My challenge as a historian is to find out about them through all of the obfuscations and lies their masters told about them.

There is also an idea most famously put forward by the philosopher Georg Wilhelm Friedrich Hegel that Africa forms “no historical part of the world.” That disregards the whole question of African history, and so many people think it doesn’t matter. Around three-quarters of the people who came to the Americas before 1800 were Africans. How can we ignore 75 percent of all the people who were there, and just act as if what they learned before they arrived didn’t matter, or what they wanted to accomplish? They can’t be ignored and they shouldn’t be — and they weren’t at the time of the revolt — despite the misleading things people said about them.

“… there were more than 13 British colonies in North America — there were 26. And by far, the ones that were most profitable, the most militarily significant, and best politically connected were the ones in the Caribbean.”

GAZETTE: Was there a document or source that you found particularly surprising?

BROWN: In the prologue I talk about the diary of Thomas Thistlewood. He was an English plantation overseer in Jamaica between 1750 and 1786. Most of his diary is a record of brutal exploitation of enslaved people, including rape of enslaved women. But he was also there during Tacky’s Revolt and one of the passages in his diary, from around the time when the revolt was pretty much suppressed, was especially interesting. Thistlewood wrote a fascinating story about one of the major rebels in his parish, Apongo [later renamed Wager]. Apongo had been a prominent person in West Africa, accustomed to trading with a man named John Cope Sr. Cope Sr. had been the chief agent of Cape Coast Castle, Britain’s trading fort on the Gold Coast. At some point, Cope Sr. bought a plantation in Jamaica. In those years, Apongo was sold into slavery and ended up in Jamaica, where he encountered Cope Sr. again. In the diary, Thistlewood writes that Cope Sr. laid out a table for him and treated him like a guest of honor on Sunday visits, and insinuated that he would one day be redeemed and sent home when his master, Royal Navy Capt. Arthur Forrest, had come back to the island. But before Forrest returned to Jamaica, Cope Sr. died, and Apongo became part of the largest slave revolt in the history of the 18th-century British Empire. I then did more research and found that Apongo had served on a Royal Navy warship and was put on Forrest’s plantation as a driver, a position for enslaved people who were promoted above other enslaved people.

That is already a very different story of slave rebellion than we’re accustomed to telling, and that document kind of carried the whole project, because I was trying to trace the whole story based on what I knew of Apongo’s movement, and his relationships with Forrest and Cope through military and plantation records. I didn’t find an exact narrative of Apongo’s journey, but what I found was much more interesting: other rebels who also served in the Royal Navy and traded diplomatically with the British and other Europeans, or those who might have served as drivers, including Tacky. That added up to something more collective than simply one biography, a pattern that suggested a radically different story than we’re used to hearing about the enslaved.

GAZETTE: You end your book talking about the American Revolution, and you’ll be speaking at a salon for the upcoming “1776” musical at the American Repertory Theater. How do these stories fit together?

BROWN: This revolt anticipates the American Revolution by a decade and a half, but occurs during what we call the Age of Revolution. And yet, the insurrection is not well known as part of the Age of Revolution. One of the things the American education system doesn’t teach very well is that there were more than 13 British colonies in North America — there were 26. And by far, the ones that were most profitable, the most militarily significant, and best politically connected were the ones in the Caribbean. As Americans, we don’t often learn how prominent Jamaica was during colonization. Once we know that, we know more about what was important to the British when those rebels in the least-profitable colony, Massachusetts, began to rise up. It reframes our understanding of the context of the American Revolution. So I’m trying to get us to see the British-American colonial world a little bit differently.

For more information about the 1776 Salon series visit the A.R.T. website.