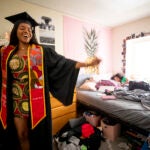 At 94, pioneering scientist Jack Strominger remains at the bench

Growing up the grandson of Eastern European immigrants in Queens, N.Y., in the 1930s, Jack Strominger excelled in school but didn’t display a profound interest in science in his youth, with the possible exception of the time he blew up a chemistry set at age 14.

Strominger started at Harvard in 1942, shy of his 17th birthday, and satisfied all the course requirements for medical school in 20 months. He went on to Yale in 1944 to become a physician and fulfill his parents’ dream.

After a series of fateful events, the life of the young physician took an unusual turn, with Strominger landing a fully funded lab at the National Institutes of Health (NIH), where he experienced the thrill of discovery and scientific excitement that would define his life. He was 26.

On a recent afternoon at his office in the Sherman Fairchild building, Strominger, the Higgins Research Professor of Biochemistry in the Department of Stem Cell and Regenerative Biology, explained why at 94 he’s still pursuing the thrill of the eureka moment.

Strominger, who has been at the helm of his Harvard lab for more than 50 years, will retire as an active research professor in July. He’ll keep his lab and his office as an emeritus professor. Of 170 emeriti professors at Harvard, 25 are in their 90s.

To honor his legacy, an annual event to be named the Jack Strominger Lectureship will be inaugurated on Wednesday. The series will be hosted alternately by the Department of Immunology based at Harvard Medical School and the Stem Cell and Regenerative Biology Department.

The talks will celebrate Strominger’s contributions to biochemistry and microcellular biology, his versatility as a scientist, and his role as a pioneer in immunology. In the 1960s, Strominger discovered exactly how penicillin kills bacteria and elucidated the chemistry of bacterial cell walls, a milestone in microbiology. He became the first recipient of the National Academy of Sciences Microbiology Prize in 1968, and two years later he was elected to the National Academy of Sciences.

“I have never worked alone. I’ve always had good people to work with since the beginning. Looking at the lists of those scientists who worked in my lab cheers me up.”

Strominger began studying the mechanism of rejection of transplanted organs in the early 1970s. In the 1990s, in collaboration with then-graduate student Pam Bjorkman and the late Harvard biologist Don Wiley, he isolated, crystallized, and determined the 3D structures of two classes of major histocompatibility complex (MHC) proteins, one of the 20th century’s most important discoveries in immunology. He was awarded the Lasker Award and the Japan Prize, two of the most prestigious awards for medical science and science and technology.

In recent years, Strominger has focused on natural killer cells, autoimmune diseases, and particularly on the immunology of pregnancy. “All the problems I pick are influenced by my medical background,” he said.

Colleagues note that despite his trailblazing achievements, Strominger has always maintained a humble demeanor and warm personality, regaling students, co-workers, and friends with funny stories and jokes, and offering insightful career and life advice.

Isaac Chiu, assistant professor of microbiology and immunology at Harvard Medical School, fell in love with immunology when he worked in Strominger’s lab as a high school student. Strominger has been his mentor ever since, he said.

“He’s very insightful and his work and his approach to science is inspiring,” said Chiu. “He encourages and inspires people by pushing you to think about the important questions to answer in science.”

Strominger’s contributions transformed the field of molecular biology and immunology, said Hidde Ploegh, senior investigator with the Program in Cellular and Molecular Medicine at Boston Children’s Hospital and a member of the Harvard Medical School faculty. Ploegh met Strominger in 1975, when he joined the lab as an undergraduate from the Netherlands, and the senior researcher became a “father-figure away from home.”

“Without Jack’s contributions, together with those of the late Don Wiley, we wouldn’t be where we are today,” said Ploegh. “Everything having to do with T cells’ recognition of antigen cells, vaccine design — his discoveries touch on all of these aspects. He has made seminal contributions to the field as a whole.”

Over his long career, Strominger has authored nearly 1,000 papers and earned about 30 prestigious awards, including many honorary degrees. But he’s especially proud of what he calls his “legacy”: more than 200 students who have become prominent scientists, among them 12 Harvard professors, 12 National Academy of Sciences members, and two Nobel laureates.

“If I didn’t have arthritis, I would do more lap swimming and horseback riding. I’m limited in what I can do, but I do a fairly good job at science.”

“I have never worked alone,” said Strominger. “I’ve always had good people to work with since the beginning. Looking at the lists of those scientists who worked in my lab cheers me up.”

“He was working on bacterial cell walls when I joined his lab and was just starting to work on the immune system,” said Springer. “He has always been driven to want to make discoveries, to do important things, and he urged me to work on important scientific problems. But he was also a real mensch, always interested in my personal life.”

Strominger’s scientific excitement has been a constant in his life, said his son, Andrew Strominger, the Gwill E. York Professor of Physics. “I remember as a kid how happy and excited he was about his work,” he said. “When it comes to his work, he peps up and gets excited even now.”

A year ago, Strominger was awarded a $300,000 NIH grant, and in June he and Judy Lieberman of Harvard Medical School received a $4 million NIH grant as co-investigators.

Although he remains healthy, arthritis has hampered Strominger’s mobility. He stopped teaching four years ago, but he continues working in his lab on the big questions that now occupy his mind: the immunity of pregnancy and the enigmas of preeclampsia, miscarriages, premature birth, and other pregnancy complications.

“Why isn’t the fetus rejected as if it’s a foreign graft?” he said. “The solution to that problem is profound.”

It’s a problem Strominger thinks about after he leaves the office and returns to his Cambridge home, where he lives with a graduate student couple who help him with various life tasks. At home in the evening, the first thing he does is elevate his feet. Then he has supper with a glass of wine and does some more work. He currently has three scientific papers in progress.

Before his wife, Ann, died three years ago, she and Strominger spent most of their free time at their farm in New Hampshire, taking care of their horses and enjoying horseback-riding. In his office, two large pictures of horses hang on the walls, a testament to his fondness for the animals. He rode until he was in his late 80s. 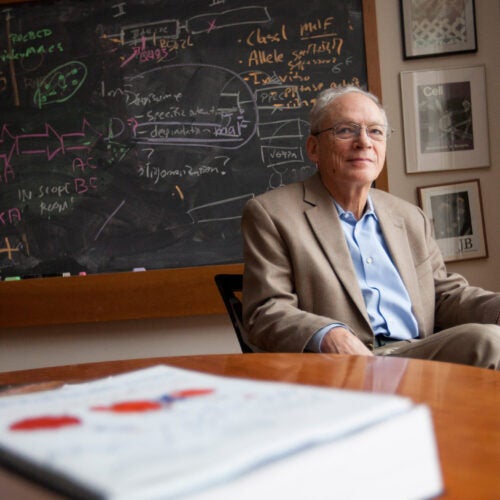 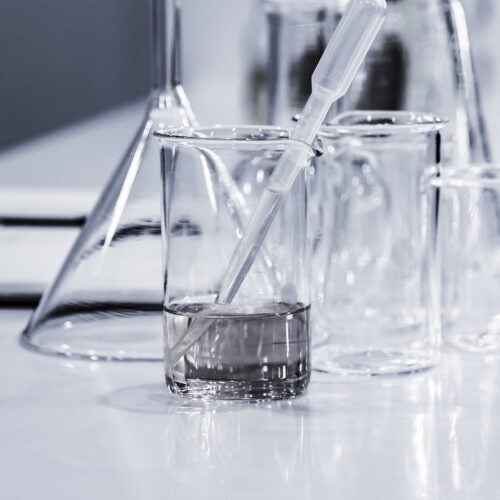 “If I didn’t have arthritis, I would do more lap swimming and horseback riding,” Strominger said. “I’m limited in what I can do, but I do a fairly good job at science.”

Asked what advice he has for young scientists, Strominger highlighted the importance of choosing a problem to solve. “Science is a great thing to do,” he said. “Think carefully about what you want to work on, get advice, and work hard. It’s fun, much better than chess.”

The first annual lecture to honor Jack Strominger will be held Wednesday at 4 p.m. at Harvard Medical School in the Armenise Amphitheater, 210 Longwood Ave., Boston.