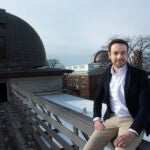 Translating black holes to the public — in 25 languages

Asked to explain decay, some scientists might talk about mold and cheese. Or sugar and teeth. Or bacteria and enzymes. Soon, Frederick Moss might just dance.

A chemistry Ph.D. student in the Graduate School of Arts and Sciences, Moss is also a professional dancer, gliding between the seemingly incongruous worlds of science and art. Neither is just a hobby. So when one tries — and fails — to appropriate the other, he cringes.

“You don’t have either side taking the other seriously,” Moss said. “When the two attempt to come together, you are often left with underdeveloped inspiration or immemorable comedic bit.”

They might not be the most obvious coupling, but art and science make a productive pair. Recent neurological research suggests that incorporating singing, drawing, or dancing into studying can help students remember slippery subjects better. Educators even have a term for the happy marriage: STEAM, where that “A” stuck inside STEM stands for Art.

Moss would make a perfect poster boy. As an undergraduate at Morehouse College, he racked up enough credits to complete two majors — premed and musical performance in classical cello — by the end of junior year. Instead of graduating early, the Queens, N.Y., native continued to explore, polishing off minors in Spanish and dance.

After leaving Atlanta, Moss moved up to Massachusetts to join Daniel Kahne’s lab at Harvard as a post-baccalaureate. On a whim, he enrolled in more dance classes at Modern Connections Collective in Somerville, exploring jazz, hip-hop, parkour, and ballet.

Not long after, Boston’s Urbanity Dance offered him a full-time contract, and he accepted. Every weekday starting in December 2017, Moss was in the studio from 9 a.m. to 2 p.m., first rehearsing with his crew and then teaching lessons to kids. From 3 p.m. to early evening, he worked on his research projects in the lab and taught chemistry to undergraduates. “It was like trying to clone myself and do the same thing in two different places,” he said.

Far less experienced than the other dancers in his troupe, Moss often had to learn technique on the fly. Sometimes literally: In a contemporary piece called “HIT,” some of the dancers leapt at others, hoping they would catch and flip them in a new direction. When it didn’t work the result was a violent collision of limbs and joints. But Moss wasn’t fazed: “When those hiccups were happening,” he said, “it wasn’t this freak-out moment. Either I ran into somebody or I just got a leg in the face, and you just keep moving.”

Growing up playing music — and helping out in his grandmother’s bakery — Moss learned to see errors as “hiccups,” little, inconsequential blips. That mentality helps him in the lab, too. One day, he spilled a day’s work into a drawer. Instead of agonizing over the lost work, he mopped up his experiment and kept moving.

Still, going back and forth between his two lives has been challenging. “How you engage with those communities is so different,” Moss said. In the lab, instructions are well-documented and precise. In the dance studio, plain instruction is not always enough. (“There’s no, I raised my femur by 15 degrees”). Instead, when learning a new move like the kip-up — a Slinky-like leap from supine to standing by pushing off the hands — Moss shopped around for different explanations, cobbling together one that worked for him.

He uses the same eclectic approach when teaching. With his dance and chemistry students, Moss explores concepts with both visual and technical explanations. For example, in the introductory undergraduate chemistry course where he is a teaching fellow, he shoots his hand forward to demonstrate how hard nucleophiles — a type of chemical species — move like lasers. Then he imitates cascading water to show how soft nucleophiles flow like waterfalls. “It seemed a lot to me like choreography,” he said. “Sure, it’s a movement of electrons or atoms, but it’s still movement on this smaller-than-the-eye level.”

“If the art is just something pretty to look at, then it’s not really of any value.”

At the end of this year, Moss will leave Urbanity Dance to spend more time in the lab. But he won’t leave dance behind. This past fall, he was selected for a one-year fellowship at the Institute of Contemporary Art in Boston, where he leads post-show talks and facilitates seminars with choreographers. He freelances, too. In December, he performed a duet called “The Flared Place” at the Museum of Fine Arts’ “Festival of Lights” that portrayed the balance of light and dark in Jewish history.

Moss is also working with a group of five other Harvard graduate students, both dancers and musicians, to explore the concept of “responsible partnering.” “How much pressure you’re putting on another person and how much you’re receiving,” he explained. That pressure could come as sound volume or human weight or both: As one of the dancers, Moss will wear a sound suit embedded with tiny sensors that bleat louder under heavier force.

Eventually, Moss wants to build his own “responsible partnership” between his two loves, replacing kitschy attempts to fuse science and art with choreography loyal to technical concepts.

“If the art is just something pretty to look at,” Moss said, “then it’s not really of any value.” 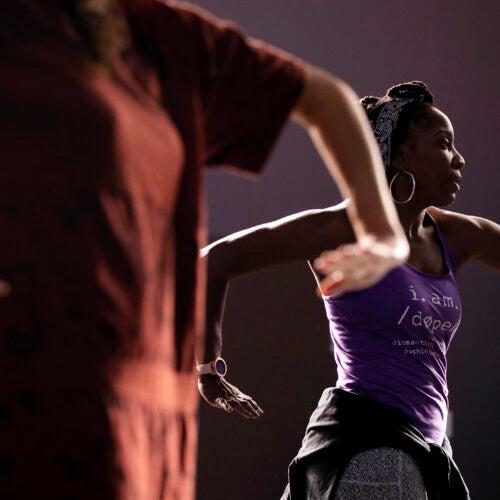 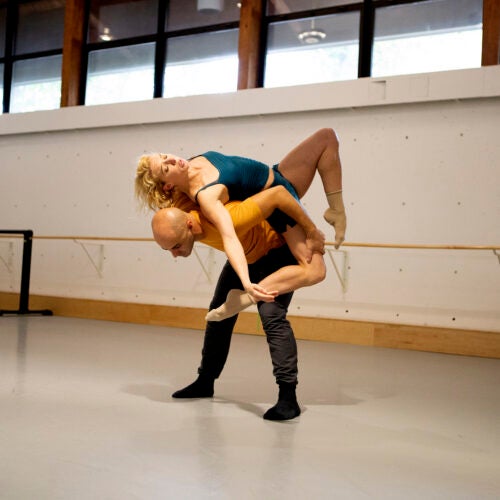