Elizabeth Banks chosen as Hasty Pudding’s Woman of the Year 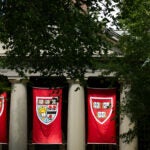 ‘Hunger Games’ star, director, producer will be honored on Jan. 31

Elizabeth Banks has been named the 2020 Woman of the Year by the Hasty Pudding Theatricals, the oldest theatrical organization in the U.S. She will be honored on Jan. 31.

Banks, a celebrated actress in both film and television, is known for breaking ground in Hollywood as a female director and producer. She has been recognized for her stand-out performances in projects including “The Hunger Games” franchise, “Love & Mercy,” and “The Lego Movie.” Banks is also a three-time Emmy nominee for her recurring roles in “30 Rock” and “Modern Family.”

“We’re very excited to honor Elizabeth Banks as our 70th Woman of the Year because of her wonderful acting career and impact in Hollywood as a female director, producer, and writer,” said co-producer Samantha Meade.

“Elizabeth is a role model to all of the young women in the theatricals, especially in a year with a female writer, female producers, and a majority female cast — we all cannot wait to celebrate and meet her!” added fellow co-producer Natalie Needle.

Season two of her critically acclaimed series “Shrill,” starring SNL’s Aidy Bryant, will premiere on Hulu this month. Last fall she produced, wrote, directed, and appeared in “Charlie’s Angels.” Banks produced both projects through her company Brownstone Productions, which she co-owns with husband Max Handelman.

The Woman of the Year festivities, presented by Related and Equinox/SoulCycle, will begin at 3 p.m. on Jan. 31, when Banks will lead a parade through the streets of Cambridge, followed by a 4 p.m. roast, after which she will be presented with her Pudding Pot at Farkas Hall, the Hasty Pudding’s historic home in Harvard Square since 1888. A press conference will follow the presentation. Afterward, the Hasty Pudding Theatricals will preview “Mean Ghouls,” its second-ever cast featuring both men and women.

To purchase tickets to the Hasty Pudding Theatricals’ 172nd production, “Mean Ghouls,” contact the HPT Box Office at 617-495-5205, email tickets@hastypudding.org, or order online at www.hastypudding.org/buy-tickets. The show will be performed at Harvard University’s historic Farkas Hall at 12 Holyoke St. from Feb. 7-March 8. The company then travels to New York to perform at The Kaye Playhouse at Hunter College on March 13 and 14, followed by performances on March 18-20 at Hamilton City Hall in Bermuda.