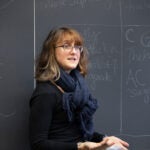 In the past half-century, China has gone from poor and agrarian to wealthy and industrialized, solidifying its position as a global trading power and moving millions of its citizens into the middle class. China and the U.S. are currently locked in a trade war, with little indication that any resolution will come before the U.S. presidential election in November. Reverberations have been felt in both nations and economies around the world. The International Monetary Fund, for instance, estimated in October that global growth dropped to 3 percent, the slowest in a decade. Justin Yifu Lin is one of China’s best-known economists, an expert on that country’s economic rebirth, and former chief economist at the World Bank. Currently a dean at Peking University, Lin spoke to the Gazette on some of the dramatic changes China made to spur its growth and on current U.S.-China trade tensions. Lin will give a talk on China’s economic development on Tuesday at 4:15 p.m. at Tsai Auditorium, organized by the Fairbank Center for Chinese Studies.

GAZETTE: You’ve often stated that the success of China’s economy in the past 40 years can be a guide for other countries. What have been some of the reasons for China’s economic progress?

LIN: The Chinese economy has been growing continuously for 40 years. One of the main reasons is because 40 years ago, China started to transition from a planned economy to a market economy. The problems China wanted to address were too many government interventions and distortions in the economy, causing misallocation of resources and repression of incentives. The issues and problems in China were similar to those in other socialist countries in the former Soviet Union and Eastern Europe as well as in many non-socialist countries in Latin America and Africa. With the move, China achieved stability and dynamic growth. Another reason was that in the 1980s and the 1990s, the dominating idea was the neoliberal Washington Consensus. Most countries followed that [free-market] approach, but China adopted a gradual, piecemeal, dual-track approach in which it provided transitional protection and subsidies to old state-owned enterprises in capital-intensive sectors and facilitated the entry to labor-intensive sectors. With that pragmatic approach, China was able to maintain stability while turning sectors such as the garment, textile, and electronics sectors, in which China had comparative advantages, into competitive advantages and export to global markets.

“China is becoming a major power, not necessarily a dominating power. The responsibility that comes with that is that when you become more developed you have the obligation to help those left behind.”

GAZETTE: What is it people don’t understand about China’s growing footprint in the world stage?

LIN: China is hard to understand. It’s one of the reasons why you always hear about the coming collapse of the Chinese economy and hear many suspicions and accusations about China’s intentions, such as the Belt and Road Initiative [a massive global infrastructure program intended to remake international trade]. Much of it is related to mindset. It was a consensus in the global economic community in the 1990s that China’s gradual dual-track transition, which allowed the state and market to allocate resources side by side, was the worst transition approach because it would give rise to misallocation of resources. Therefore, whenever China’s growth rate slowed down, the prediction about the coming collapse of China surged, as the mindset of the global intellectual community was shaped by the theories generated from the experiences of advanced countries in the past. Ironically, China was the only country in the world which did not encounter a systemic crisis in the last 40 years.

Another thing is that in the past, when the West rose to power, it colonized many other countries, so when people see the rise of China, they think China is going to colonize other countries as well. But, I think with China it is very different. China’s history and philosophy are different. Chinese philosophy is always: “I want to be successful, but if I want to be successful, I need to help other countries be successful, as well. I want to become rich, but if I want to be rich, I need to help other people to be rich also.” That’s Confucianism. It’s our philosophy, so from what I see, the rise of China will not only be good for China but provide a great opportunity other countries. For example, the Belt and Road Initiative, with its focus on infrastructure connectivity, is not a debt trap to achieve new colonialism but an opportunity to remove the infrastructure bottlenecks of growth for countries in South Asia, Central Asia, Africa, and many parts of the world.

GAZETTE: Is China now the dominant economic power in the world? What is the responsibility that comes with the clout?

LIN: China is becoming a major power, not necessarily a dominating power. The responsibility that comes with that is that when you become more developed you have the obligation to help those left behind. For example, in addition to the Belt and Road Initiative, China also initiated the China-Africa Partnership, which provides funds to support industrialization, agricultural mechanization, and infrastructure for modernization in Africa. One issue for China is that most developed countries see things from their own eyes. They see what they think is important in their own countries and assume that they are also important for other developing countries. For example, development cooperation from developed countries focuses on education, health, gender equity, transparency, and democracy. They provide those supports with good intentions but the empirical evidence shows those programs do not generate jobs and growth. As a result, poverty persists. People often use their own past to predict what China will do in the future. However, China has a different philosophy and experiences, so China’s approach and its impacts will be different.

GAZETTE: What are your thoughts on the current trade war between the U.S. and China?

LIN: Trade is a win-win, and a trade war isn’t a win for anyone. China did not have any intention to have a trade war with the U.S. From many prominent economic theories, we know that protectionism is not good, and globalization would be a better win-win for everyone. Certainly, the U.S has its problems, like the stagnation of wages of blue-collar workers and the declining size of the middle class, but those are not caused by the trade policy of China. Those were caused by some internal, structural problems in the U.S. We know that you cannot use restrictions or trade protectionism to address those kinds of structural problems. So, I think trade war is not good for China; it’s not good for the U.S.; and it’s not good for the world.

GAZETTE: The Trump administration has set Dec. 15 as the day when the U.S. will impose tariffs on more than $150 billion of Chinese consumer goods, unless a new trade accord is signed by then. What would be the fallout if those tariffs kick in?

LIN: China would have no choice but to bear the burden, but it will also be a burden to the U.S. China will have to look item to item, but overall the impact will not be so large. This is because some of the items are items that China has not begun to export to the U.S., such as some AI products, and for other items the production may shift to Vietnam and other countries with components imported from China. The reason the U.S. says it will implement these tariffs is because it wants to narrow the trade deficit, but the result is just the opposite. The U.S. trade deficit continues to increase in spite of the tariff measures, not just with China, but with European countries, Japan, Canada, and Latin America. Last year, for instance, in spite of tariffs the overall trade deficit in the U.S. increased about 12 percent and with China it increased about 11 percent.

GAZETTE: In October, you — along with 37 other economists from the U.S. and China (five of them Nobel winners) — signed onto a statement for the two nations to abandon their trade war and seek an alternative path forward that would give both countries more latitude to both pursue their own domestic economic policies and hit back at those that hurt them. Can you explain what that new path would be?

LIN: The statement proposed a “four buckets” framework to handle trade disputes, including prohibition of “beggar thy neighbor” policies [that worsen the economic problems of other nations]. Not all of them are agreeable, of course. In market competition you always have a loser, but if you said in the competition a winner needs to compensate for the loser then it’s not a competition. The statement essentially stressed it’s better to have talks and negotiations than to threat and decouple. It provided a sensible framework to do that, saying we may have differences, but we should improve our understanding of each other’s points to get to the root of the problem and then come up with solutions that are agreeable to both sides. Under the current situation I hope rationality can prevail.

GAZETTE: How do you see the current situation resolving?

LIN: It is hard to predict because from China’s side no one can predict the next move of this U.S. administration. But like people always say: Prepare for the worst and hope for the best. 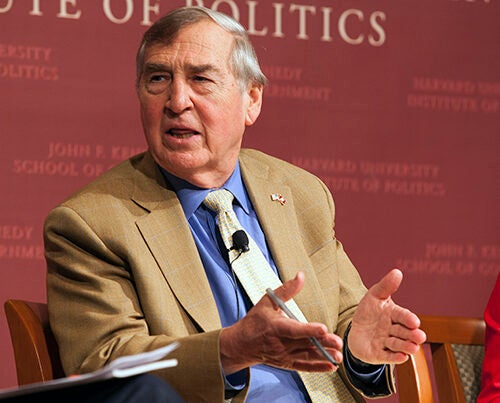