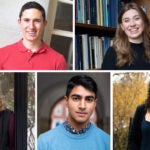 Nine Harvard researchers are among the 443 scientists who have been named fellows of the American Association for the Advancement of Science (AAAS), the world’s largest general scientific society.

Along with the other 2019 AAAS fellows, the scientists will be honored at the organization’s annual meeting in February where they will be given a certificate and ceremonial pin.

The research of the Harvard fellows ranges from studying neuromuscular control in mammals to the development of vaccine strategies to work in international law.

The AAAS includes more than 250 affiliated societies and academies of science, serves 10 million individuals, and publishes the journal Science. It was founded in 1848 and its tradition of naming AAAS Fellows began in 1874.

Election as an AAAS Fellow is an honor bestowed upon association members by their peers. For more information on the nomination process, visit the AAAS website.

Listed are why each fellow was voted in:

Biewener, the Charles P. Lyman Professor of Biology in the Faculty of Arts and Sciences, was honored for his contributions to animal biomechanics, particularly his studies of neuromuscular control.

Higgins, professor of microbiology at Harvard Medical School, was honored for his contributions in microbial pathogenesis and the development of vaccine strategies for cellular immunity to parasitic microorganisms capable of growing and reproducing inside a host’s cells.

Manoharan, the Wagner Family Professor of Chemical Engineering and professor of physics at the Harvard John A. Paulson School of Engineering and Applied Sciences, was honored for his study of condensed matter and biophysics, especially showing how systems and materials organize themselves in three dimensions.

Marks, the François-Xavier Bagnoud Professor of Health and Human Rights at the Harvard T.H. Chan School of Public Health, was recognized for his contributions to the field of human rights and international health from the perspectives of law, politics, organization, and international economics.

Moses, the Julia Dyckman Andrus Professor of Surgery at Harvard Medical School and the director of the vascular biology program at Boston Children’s Hospital, was recognized for her work in biomarker medicine and targeted nontoxic nanomedicine to treat cancer.

Polyak, a professor of medicine at HMS and at the Dana Farber Cancer Institute, was honored for pioneering studies on clinical and functional relevance of intratumor heterogeneity and demonstrating the role of the microenvironment in breast tumor progression. Her goal is to identify differences between normal and cancerous breast tissue and use the information to improve the clinical management of breast cancer patients.

Reede, the dean for diversity and community partnership and professor of medicine at HMS, was named for her mentoring and work in leadership development in biomedical sciences and health policy.

Thier, a professor emeritus of medicine and health care policy at HMS and physician at Massachusetts General Hospital, was chosen for contributions to the field of internal medicine and kidney disease, as well as his leadership and expertise in national health policy, medical education, and biomedical research.

Wirth, the Richard Pearson Strong Professor of Infectious Disease at the Harvard T.H. Chan School of Public Health, was honored for her work in molecular microbiology, particularly using molecular genetics and genomics to study the human malaria parasite, Plasmodium falciparum.