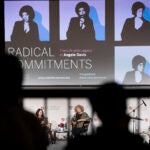 Lawrence Lessig has long crusaded against the influence of money in politics. But in a new book, the Roy L. Furman Professor of Law and Leadership at Harvard Law School casts his sights on the broader topic of reinvigorating democracy. In “They Don’t Represent Us: Reclaiming Our Democracy,” Lessig argues that the nation’s political system is in a state of dysfunction, mired in partisanship and dominated by special interests. The Gazette recently spoke to Lessig about how it got this way and how he believes it can be fixed.

GAZETTE: You argue that the problem is not that our political system benefits the rich but that it benefits no one. How so?

LESSIG: I don’t mean to suggest that it doesn’t benefit the rich. It’s just that it’s not just benefiting the rich. The rich benefit obviously because of their influence in the funding of campaigns. It’s only the rich who fund campaigns in any significant way, and it’s clearly the rich whom representatives bend over backward to make happy in their behavior as representatives. But my point is that when you think the way each of the dimensions of unrepresentativeness has its effect, it’s not always benefiting the rich. So when the Republican Party suppresses the votes of Democrats, primarily African Americans in states like Georgia, it’s not that that’s necessarily benefiting the rich in Georgia. It’s benefiting the Republicans in Georgia. Or with gerrymandering, the people it’s benefiting are the extremists. The extremist Democrats and the extremist Republicans are not necessarily the rich Democrats or the rich Republicans. My point is that we have to recognize that this is not just a conspiracy of the rich. If it were a conspiracy of the rich, it might be better because at least they’d have a plan. But the problem we have now is that we have a government that’s following no plan, that has no coherent policy that it’s advancing, which means it’s a government that accomplishes nothing about fundamentally important problems that it needs to be addressing.

GAZETTE: You say the most destructive aspect of our reliance on money in politics is not how it shapes campaigns but how it influences our representatives.

LESSIG: That’s a critical point because it’s a clue to why Congress, even under the jurisprudence of this Supreme Court, should have the power to address the problem. The real distortion in our political system comes through the constant influence that money has on the behavior of the representatives. The representatives know that if you vote one way or another you’re going to either [attract] or repel substantial amounts of money to their campaigns, and so they live in this constant shadow of the influence of these funders. You don’t have to be a Ph.D. in psychology to recognize that constantly sucking up to the richest people distorts the view of these representatives about what they need to accomplish.

GAZETTE: Cable TV, the internet, and social media have been seen often as democratizing forces in modern society. Your book suggests otherwise in its effect on our politics.

LESSIG: Yes. Twenty years ago with the birth of the internet’s influence in popular culture, most of us thought if you can just give people information the world will be a better place. It turns out it doesn’t quite work that way. If you give people information in a fragmented media environment where the incentives of the provider of that information are to polarize and to make more radical the consumers of that information, what that produces is a political culture less able to deliberate about matters of public import. So what the internet has done in the context of political speech is to make us less able as a democracy to work through the hard problems that we have as a democracy, even if it’s given us much better cable TV entertainment.

GAZETTE: Is advertising at the core of this trouble?

LESSIG: I really sometimes feel I’ve become such a radical on this issue. But I think it’s important to have a radical voice on this issue. Increasingly, we just find ourselves controlled or directed or invaded by this constant drumbeat of advertising. If it were just a distraction you might say, “We have to learn to live with this.” But when you begin to see that the business model of advertising is to make us stupid, to make us polarized, when you realize that their business depends on us being a less-effective democracy, we have to step back and ask, “Why do we allow this? Why do we allow an influence more corrupting than the Russians into the center of our democracy?” That’s what we’ve done by allowing such an important chunk of political speech to be directed and controlled by businesses that depend upon this dynamic.

GAZETTE: But your book does not let people off the hook. Are we part of the problem?

LESSIG: In one sense, I want people to realize just how bad we have become at wrestling with issues of public import. But on the other it’s obvious that we wouldn’t be very good at these issues given we live in this fragmented, polarized media environment. Now some people look at that fact and they say that’s why we need to get rid of democracy, or reduce democracy, because the people are not up to the job. But that’s not my reaction. My reaction to it is to say we need to find ways to create environments of democracy that are edifying and produce a result which “we the people” would be proud of, that give us a chance to deliberate and reflect on the questions democracy demands we answer and give answers that are sensible. And research suggests that in fact these environments exist.

GAZETTE: So how can we can begin to turn things around?

LESSIG: The most obvious, and conceptually the simplest thing we can do is to fix our government, the corrupting influences of unrepresentativeness inside our government. We could deal with most of the problems that I describe in my book — money in politics, gerrymandering, suppression of the vote, maybe even the Electoral College — through simple changes in the statutes that govern our democracy. With respect to us, it’s a harder problem because we’re not going to ban advertising — at least not unless we change the First Amendment — and we’re not going to get people to spend an hour every month studying issues of national import. I think the answer there is to begin to be more realistic about what’s possible for people inside of this democracy and to begin to constrain spaces where we expect “we the people” to have a deliberative role in government decisions, while building these infrastructures for something better. Having more inclusive representative bodies of ordinary people participating in decisions about public matters will begin to convince us of an alternative way to represent the people inside of our democracy.

GAZETTE: Are changes to the Constitution also essential?

LESSIG: Once statutory changes are made, I think they need to be codified or made permanent in the Constitution. But the essence of the constitutional reform is to guarantee that we produce a representative democracy, to give the power to Congress to create those conditions of representativeness, and to make sure that we have institutions, whether the courts or other institutions, that can force the politicians to create those conditions.

GAZETTE: Do you see any encouraging signs the American public is motivated to fight for these kinds of reforms?

LESSIG: Absolutely. Twenty-eighteen saw more citizen-led reform measures passed in states across the country than at any point in American history. A wide range of reforms, from gerrymandering reforms to ranked-choice voting to anticorruption measures to transparency measures to the voter disenfranchisement initiative in Florida, all of them driving for the idea of reforming our corrupted democracy. I think from the grass roots up there’s more understanding and energy than ever before in our history. The challenge is just how to translate that into a national movement that can actually have some effect. I’m hopeful. I’m not yet optimistic.

GAZETTE: You have long championed the need for reforming our electoral system. What convinced you a larger strategy was needed to fix our democracy?

LESSIG: As I wrote more extensively about campaign finance and then looked at the other silos of reform efforts, it became clear to me that there was a common thread linking them all. The reform community is very small and very divided: You have money in politics people; you have gerrymandering people; you have voter-suppression people; you have Electoral College people. And each of these people sometimes act as if their reform is the silver bullet. What was clear to me is that none of these silver bullets would solve the problem. But more fundamentally, all were pointing to a common problem, and if we could just agree that the common problem is unrepresentativeness or unequal political power among our citizens, then we might be able to build a big enough movement to actually achieve political equality in each of these dimensions. It’s a moral fight because at its core it is a fight about whether citizens have equal political rights within their democracy.