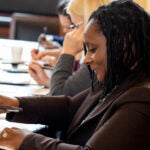 Notes of gratitude, gifts of charity

Wild birds roam many parts of the campus

It seems as if they’re everywhere these days. And while they’re perhaps not as plentiful as they were back when English settlers first piled off the Mayflower, they’ve made a major comeback across the country and enjoy a certain measure of celebrity, at least locally.

On a recent cool fall morning, one such fowl strutted casually down Massachusetts Avenue at rush hour just outside of Harvard Square, seemingly oblivious to the speeding traffic. To its credit, it crossed in the crosswalk, lending credence to the claim that the wild ones possess more street smarts than their domesticated cousins. Cars slowed to a stop, and amused passersby pulled out smartphones to record the moment.

At Harvard, the turkeys and their eager paparazzi are a familiar sight. The birds are regularly seen around campus, where they like to roost high in trees (yes, they fly). Their local numbers have spiked in recent years, mirroring trends around the state. According to the National Audubon Society, that started in the 1970s when biologists trapped 37 birds in New York and released them in Massachusetts in an effort to reintroduce the species.

The turkey had nearly gone extinct in the U.S. Year-round hunting and massive forest clearing by newly arrived settlers starting in the 1600s almost spelled doom for the birds, which were estimated to number around 10 million before waves of Europeans began landing along the East Coast. By the mid-1850s New England’s wild turkeys were all but gone, and 70 years later the birds had disappeared from 18 of the 39 states they once inhabited, according to the National Wild Turkey Federation.

Reintroduction efforts began in the 1930s and expanded thereafter. Between 1951 and 1974 America’s wild turkey population grew from roughly 320,000 to 1.4 million. Currently, there are about 6.2 million birds nationwide, with more than 25,000 in Massachusetts alone.

Some of them live at Harvard.

Jason MacKay, Harvard’s supervisor of Landscape Services, said the animals have become much more noticeable in the Old Yard in the last two or three years, migrating from favored trees along the Charles River to the main campus and areas around Quincy and Prescott streets. Luke said workers are occasionally spooked when the big birds dart out from behind the bushes in the early morning hours, but no one has thus far been attacked.

“For the most part they make way to anything we are doing, especially if we have any equipment going,” said MacKay. “Nothing has pecked at us. Nothing has gotten aggressive toward us. We’ve been lucky, I guess.”

Sadly, some of the poults, or young chicks, who live in the Yard haven’t been as fortunate. MacKay said he noticed a mother turkey this past spring spending time near Canaday Hall with her brood, and it kept getting smaller.

“I think the mother turkey had about six baby turkeys with it and they were very small. As soon as the mother would wander off, if there was one little straggler, she’d give out her little call and they would hear and come toward her. But the problem that we saw were the hawks. She started out with six, and then there were five and then four.”

Another place the turkeys like to hang out is Elmwood, the official home of Harvard’s president, a half dozen or so blocks west of the Yard. The birds have been on the grounds for about the past seven years, said Kim Tseko, associate director of events in the Office of the President, who likens their flight to “something out of a Dr. Seuss book.”

According Tseko, the large fowl have even dropped in on official functions. She recalled former President Drew Faust, during an event on the front lawn some years back, telling guests she hoped a turkey would make an appearance. About an hour later a bird obliged, strolling into the yard to much delight.

“Everybody thought it was the coolest thing ever that we had a turkey,” said Tseko.

“I’ve been on campus on Oxford Street with hundreds of students parading past this turkey next to Mallinckrodt Hall without even ever seeing it. I worry that students on campus may not notice these amazing birds.”
— Scott Edwards, ornithologist

And it seems the turkeys have grown fond of the famous address. “For years the number of birds stood at seven,” said Tseko, “but last week President Bacow and his wife, Adele, counted 10.” The Bacow’s younger son Kenny, had a theory for the uptick: “Smart plan,” he told his parents. “Hide out at the home of a couple vegetarians for the next few weeks.”

While they have a reputation for becoming aggressive when threatened (and sometimes, when people are just minding their own business), ornithologist Scott Edwards said undergraduates have nothing to fear. The turkeys in the Yard aren’t bothered by the throngs of people milling about, he said, because “they’ve learned that these people pass by, and they don’t seem to cause harm.”

What he does fear is that the students will miss them altogether.

“I’ve been on campus on Oxford Street with hundreds of students parading past this turkey next to Mallinckrodt Hall without even ever seeing it,” said Edwards, professor of organismic and evolutionary biology. “I worry that students on campus may not notice these amazing birds,” he said.

Edwards, who is also curator of ornithology at Harvard’s Museum of Comparative Zoology, wants harried students to stop and take a moment to appreciate the birds and their subtle, iridescent plumage. Their feathers are filled with keratin and other proteins that reflect light, he said, lending them “satiny, reflective hues.” Those feathers, he added, are in fine display when a male tries to impress a female by fanning its tail.

“It’s quite extraordinary. Clearly the males are working pretty hard to get the attention of those females.”

For Edwards, part of a wild turkey’s appeal is the way in which the bird brings to mind its prehistoric ancestors. “People don’t realize that some dinosaurs were actually turkey-sized … the way wild turkeys walk and the way they are shaped just remind me so much of some of these now-extinct dinosaurs.”

“They have this muscle type in their flight muscles that has lots of mitochondria and lots of muscle fibers good for short bursts of energy, not long-distance stuff … and that allows them to get up into trees. They are not the most graceful fliers, but they can make it around.”

With their penchant for perching in branches, it makes sense that Harvard’s Arnold Arboretum, home to thousands of trees, is a hot spot. According to Brendan Keegan, a member of the Arboretum’s horticultural staff, two flocks made up of several birds each have been spotted recently around the park.

“Two weekends ago, I saw about 15 in one spot, some in the trees but most on the ground in the Oak Collection,” said Keegan, who has worked at the Arboretum since 2016. They tend to gravitate to the paved paths. “They seem to like walking along the roads because our vehicles crush up fallen acorns, which makes it easier for them to eat. They also eat seed pods and berries from a number of our native and non-native trees, as well as the spontaneous herbaceous plants in the landscape.”

As in other parts of the city, the numbers of Arboretum turkeys seem to be multiplying, he said. But while they have their chicks in the city park, they have also have to contend with the park’s natural predators.

“I’ve seen a nest on the grounds, so they are definitely breeding here,” said Keegan. “I’ve also found several giant piles of plucked turkey feathers, so they are also being hunted in the landscape by coyotes and hawks, too.”

“Still, if you are going to be a turkey in Boston, I can think of no place more beautiful than the Arnold Arboretum” said William “Ned” Friedman, director of the Arboretum and Arnold Professor of Organismic and Evolutionary Biology. “In fact, I tend to think that the turkeys at the Arboretum are pretty sophisticated — they just seem to know that this is a Frederick Law Olmsted designed landscape.” 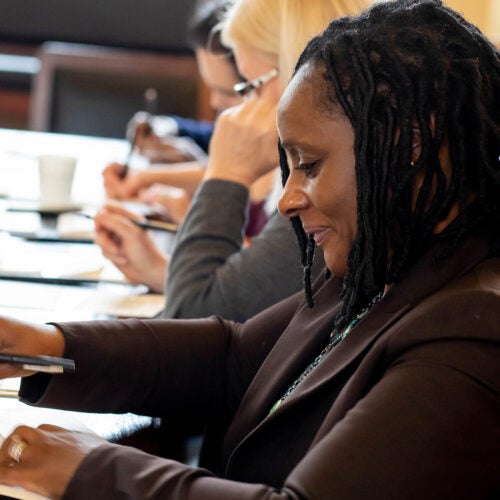 Notes of gratitude, gifts of charity

Harvard staff pen letters of appreciation at Giving Thanks event 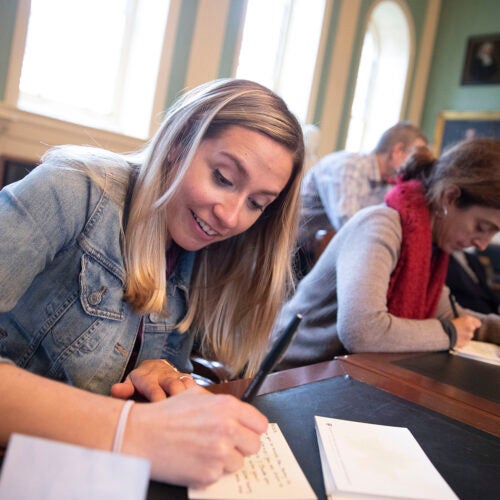 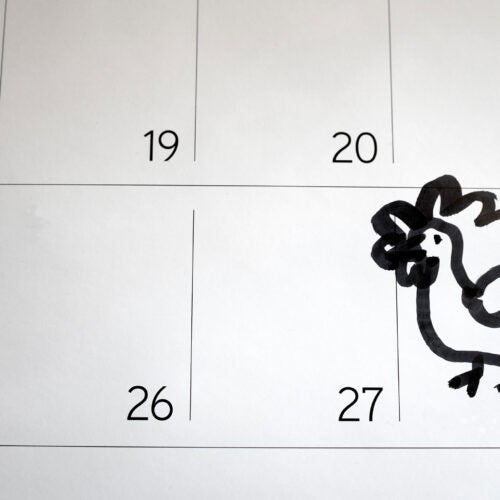 At home or on campus? Longstanding family traditions or new ones? The classic foods or fresh takes?