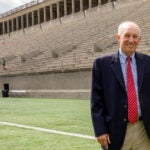 They represent nine of Harvard’s 12 undergraduate Houses and will take on a range of subjects from intellectual history to animation, conflict transformation to pharmacology, as winners of two of the most prestigious scholarships available to American college students.

Seven Harvard seniors — Neil Band, Kristine Guillaume, Olivia McGinnis, Luke Melas-Kyriazi, Lauren Spohn, Sai Shanthanand S. Rajagopal, and Constance M. Bourguignon — were among the students named Rhodes Scholars this past weekend. These five Americans and two Canadians will join 100 others from across the world to begin their studies at Oxford in October.

This brings the ranks of Harvard’s American Rhodes Scholars to 369. In addition to the Canadian Rhode Scholars confirmed this weekend, a complete list of International Rhodes Scholars will be forthcoming.

Additionally the U.S.-Ireland Alliance on Monday named two Harvard seniors, Kalia Firester and Selena Zhao, as recipients of the George J. Mitchell Scholarship, which will send 12 honorees to Ireland for a year of graduate work starting in September.

The Rhodes winners said they were stunned by the news and felt a deep sense of gratitude to all who helped along the way.

Guillaume, Harvard Crimson president and member of Lowell House, said, “I am so appreciative of everyone — family, professors, mentors, and friends — who have been so supportive of me throughout my undergraduate career. Without them, I wouldn’t be here.”

Guillaume, who is concentrating in history and literature and African American studies with a focus on mass incarceration and prison writing, looks forward to studying at Oxford and “to continue growing and learning with a cohort of brilliant scholars.” She added, “I think it will be an amazing opportunity to refine my research interests as both a scholar and a journalist.” She plans to pursue two one-year programs: the M.St. in English and American studies and the M.St. in U.S. history.

“I am incredibly thankful for all the support I have received from my adviser, Judy Murciano, and my professors Sasha Rush and Arjun Manrai, who have brought me into the field of machine learning and have been amazing research mentors over the last three years,” he said. “I also feel very lucky to have been able to learn from so many wonderful fellow students here at Harvard, especially my blockmates!”

Melas-Kyriazi, who lives in Leverett House, is a mathematics concentrator and intends to pursue a D.Phil. in computer science at Oxford. He will focus on machine learning and its applications in health and medicine. Outside of classes and research, Luke serves as treasurer of Harvard Student Agencies (HSA).

Upon learning she was named a Rhodes Scholar, Spohn recalled: “My heart was beating so loud. After that, it was just a blur.”

Spohn, who lives in Currier House, moved every two years as a child growing up in an Air Force family. The one constant was her favorite books — “The Chronicles of Narnia” and “Lord of the Rings,” among the first. They both provided comfort and helped connect her to new neighbors and friends at each new place.

“Every conversation is a kind of self-discovery,” she said. “You can read on your own, but what you can’t get is this amazing conjunction of so many brilliant people. That’s what I hope to do at Oxford, dive into one of the most storied places in the world and make as many connections as I can.

“At Oxford, I applied for two master’s in intellectual history and 19th-century literature. I’m excited to explore all that Oxford has to offer, and I hope to use the knowledge and relationships I gain during my time there to write about culture, history, and literature in a way that helps people live more reflective lives and better connect with each other.”

McGinnis of Dunster House was “absolutely shocked to be chosen among some of the most amazing, intelligent, and dedicated people,” and emphasized that “the finalists and the selection committee members were first and foremost just so kind.” McGinnis said, “All of my fellow finalists want to do good in this world, and I am confident that we all will.”

She noted that she is “thankful and excited to have two years at Oxford to explore neuroscience and figure out where I can best make a difference in the field before a Ph.D.”

“I am really interested in probing the question of what is the self — from the primitive models in zebrafish that I study in my undergraduate thesis to mouse models or human patients that I hope to study to understand the self as it changes in neuropsychiatric states,” said McGinnis.

She also plans to use the opportunity to advocate for mental health issues.

Band lives in Adams House and is concentrating in computer science. He said he felt a huge debt to family, friends, and teachers, one in particular. “I’d love to explicitly thank my computer science concentration adviser, Professor Stratos Idreos — without his mentorship and kindness, I had no chance,” he said.

Band said he is “looking to work toward two one-year degrees with the scholarship, one in computer science and the other in pharmacology.” He said he hopes to explore how computational methods can improve the process of drug discovery, and how to structure health care systems toward more affordable treatment.

In addition to his academic pursuits, Band is a campus leader on issues of technology and entrepreneurship and the founding technology chair of the Harvard Undergraduate Blockchain Group. He is also an accomplished dancer with Harvard College Bhangra. At Oxford, he will do an M.Sc. in computer science and an M.Sc. in pharmacology.

All of Rajagopal’s studies have led to the work he will continue at Oxford. The A.B./S.M. degree candidate completed his joint concentration in biomedical engineering and women, gender, and sexuality as a junior last year, and is working toward a master’s in mechanical engineering.

“The Rhodes is a culmination of work I’ve done in the past in terms of research and service. I’m really using it as a way to extend that work into the future,” said the Pforzheimer House resident and Winnipeg native who built penile prostheses and studied their socio-cultural implications as related to trans masculinity in South India.

“I spent a lot of time conducting face-to-face interviews with trans men. Some would say, ‘I want to change my body to fit with a religious ideal for Hindu men,’ and I became curious of how gender and religion interplayed in a historical context, especially during the colonization process. I didn’t have enough space in my thesis, so I thought grad school was an option.”

Rajagopal, who is a member of Harvard’s Hindu Students Association and recently ran as a Green Party candidate for the Parliament of Canada, will expand his study to include Canada with a focus on the intersection of inclusive health care policy and trans medicine.

“A lot of the barriers in place in Canada for trans people come from our colonial history and are quite structural. I want to design better policy today,” he said.

Bourguignon ’20, a native of Montreal, will study education at Oxford, a field Bourguignon said is “not frequently recognized by the Rhodes as an academic pursuit.”

“It’s worthy to me to see they believe in the cause. It’s not policy. It’s not science, not what you think of as typically impactful ,” Bourguignon said. “Education is a tough problem because it’s so specific. The problem you have at one school you won’t have across the street, or across the state or the country. I want to go back to Quebec and inject a social justice mindfulness into the curriculum to raise children who will be advocates for equity and equality for both the groups they are part of and the groups they are not part of.”

The Eliot House resident, who is joint concentrating in Romance languages and literatures with a special field in French and Francophone studies and women, gender, and sexuality with a secondary in educational studies, described the award as particularly meaningful as a woman and someone who identifies LGBTQ and a person of low-income background.

“It means a lot to be contributing to the actualization of what it means to be a Rhodes scholar,” Bourguignon said.

The Mitchell Scholarship is named for former Democratic senator George J. Mitchell of Maine and honors his contributions to the Northern Ireland peace process.

Firester, who lives in Quincy, is concentrating in art, film, and visual studies with a secondary in integrative biology, and combines her passion for science, animation, and filmmaking to create works that elucidate complex subjects that are otherwise difficult to observe. She will study animation at Ulster University.

“I am thrilled to join the Mitchell scholarship program and thankful to the U.S.-Ireland alliance for welcoming me into such a kind and inspiring cohort,” Firester said. “I will continue to make animated films that connect my work in science and art and draw on the distinctive Irish artistic sensibility for influence, inspiration and collaboration. I look forward to exploring Ireland in depth!”

Zhao resides in Cabot House and is a government concentrator researching consociationalism and the impact of this form of power-sharing. She will study conflict transformation at Queen’s University Belfast.

“I spent this past summer in Belfast researching sectarianism in politics, and am so excited to return to Belfast,” Zhao said. “I’m so incredibly honored to be named a Mitchell scholar. All the finalists were not only extremely accomplished, but just such incredible, lovely, kind and genuine people, and for that reason I’m most humbled to be a member of this year’s cohort. I also hope to immerse myself in the Northern Irish community, join the conservation society, go seabird watching, play folk music, and hike the coastlines!”

For a complete list of the 2019 Rhodes Scholars or for more information, visit the Rhodes Trust homepage.

For a complete list of the 21st class of George J. Mitchell Scholars or for more information, visit the U.S.-Ireland Alliance homepage. 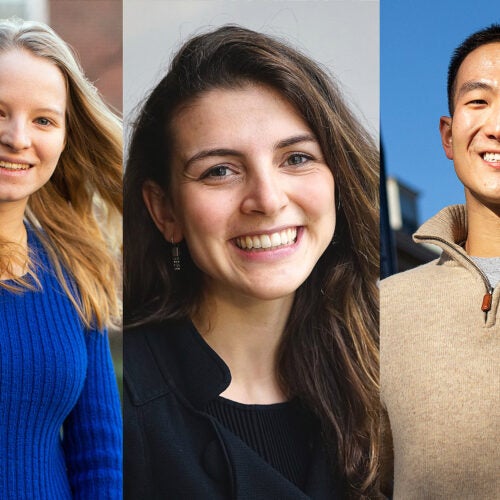