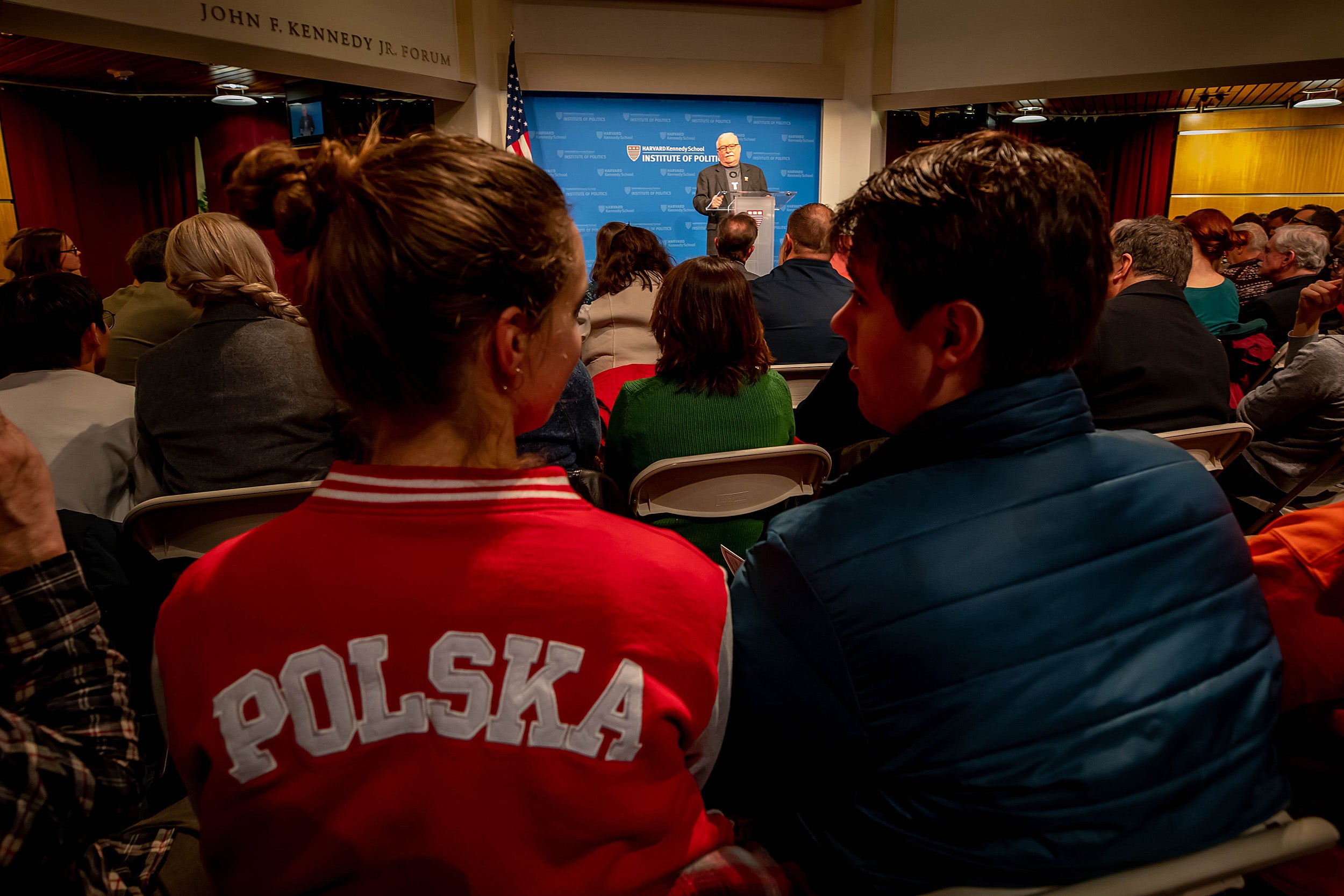 The year is 2021, and the nation is in crisis. North Korea has just tested a missile that will soon be capable of delivering a nuclear warhead to the continental U.S. The move took Washington by surprise as the project was likely funded via a new Chinese digital currency, which allowed North Korea to bypass the global banking system. In response, the National Security Council House has gathered in the White House Situation Room to formulate short- and long-term responses.

“Digital Currency Wars: A National Security Crisis Simulation” unfolded before a packed audience in Kennedy School Forum on Tuesday night. Hosted by the Economic Diplomacy Initiative and co-sponsored by the Belfer Center for Science and International Affairs, the exercise brought together administration veterans, career diplomats, and academics to dramatize a very real prospect — the rise of an encrypted digital currency that would upend the U.S. dollar’s dominance and effectively render ineffective economic sanctions, like those currently applied to North Korea.

Belfer Center Co-Director Eric Rosenbach played the U.S. national security adviser. With the usual Forum podium set up like the White House Situation Room, complete with red phone, he asked the center’s executive director, Aditi Kumar, in the role of the deputy national security adviser, to summarize the intelligence on the launch. The reply: “The CIA believes with a high degree of confidence that this missile can … deliver a warhead to the continental U.S. in six to nine months.”

The situation was hypothetical, but the proliferation of so-called virtual cryptocurrencies, like Bitcoin, poses real-world threats because they allow unmonitored movement of large sums of money on decentralized networks. “The fundamental nature of money is changing,” said Neha Narula, director of the Digital Currency Initiative, part of the MIT Media Lab, playing the assistant to the president for digital currencies, aka the Currency Czar. She then outlined various potential scenarios, like cyberattacks on individual banks and the international SWIFT (Society for Worldwide Interbank Financial Telecommunication) banking network, acts of aggression that can be secretly funded by cryptocurrencies, which cannot be easily traced.

“I wish I had better news,” said Lawrence H. Summers, Charles W. Eliot University Professor and Harvard president emeritus, in a revival of his former role as Treasury secretary, a post he held in the Clinton administration. “Fundamentally, our ability to sanction North Korea in a devastating way depends upon China’s cooperation,” Summers said. But he noted that was also largely true “before the digital yuan,” as the fictional currency was called.

Among jokes about the gender of the unnamed president in 2021 (and some jocular fake tweets from our current one), the council then discussed alternatives to sanctions, whether the U.S. should develop its own digital currency, and what America’s future might look like if the dollar’s economic dominance is indeed over.

“The competitiveness of the U.S. dollar is a matter of national security,” said Narula.

Ash Carter agreed. The director of the Belfer Center played secretary of defense, his real-life role in the Obama White House. “We can’t let stand the Chinese using this currency issue as a way of making inroads into what has traditionally been a strength of ours,” he said, noting China’s increasing sway throughout Asia and Africa. “We have to counter it in some way.”

How that could be achieved was a point of contention. Diplomacy was the first option proposed. “The president has to tell Xi Jinping that this is a core issue for the U.S.,” said former U.S. Ambassador Nicholas Burns, the Roy and Barbara Goodman Family Professor of the Practice of Diplomacy and International Relations at HKS, in his role as secretary of state. “The Chinese have created a problem for us by taking away our leverage with sanctions.”

More proactive steps were also recommended. “We should be creating a digital currency,” argued the Brunswick Group’s Jennifer Fowler, an expert in illicit finance and economic sanction issues, in her role as director of national intelligence.

“There is a financial technology revolution taking place, and we are about to miss it,” agreed Richard Verma, vice chairman and partner at the Asia Group, a D.C.-based strategic and business advisory firm, playing the ambassador to China. “My recommendation is we not try to quash this effort, but that we get on board.”

Citing the looming danger, Summers pushed for a more multifaceted response, including a public-private partnership to develop digital options, and called for a “hardening” of SWIFT, to make the current system more secure. “This is not a Kennedy School exercise for us,” he said, to laughter.

The team, which also included Meghan O’Sullivan, Jeane Kirkpatrick Professor of the Practice of International Affairs, as the vice president, and Gary Gensler, Professor of the Practice of Global Economics and Management, MIT Sloan School of Management, as assistant to the president for economic policy, ultimately agreed to make multiple recommendations. (Kennedy School students served as council staff, providing research, background, and talking points.) All agreed that diplomacy would have a place, with China informed that North Korea was a serious concern, and reached consensus on improving SWIFT security and the need for the U.S. to develop options for a digital currency.

“We need a strategy to resuscitate U.S. financial prowess,” concluded Rosenbach, as he readied to make the call to the president, ending the exercise.