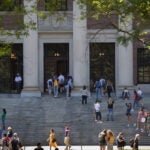 Sarah Lockridge-Steckel left Harvard College in 2009 and headed to Memphis, Tenn., where she co-founded The Collective, a nonprofit that works with schools, businesses, and community groups to remove barriers to success for disadvantaged youth.

Anne Sung returned home after Commencement in 2000, trading in classes in Harvard Yard to teach in one of Texas’ poorest regions, the Rio Grande Valley on the Mexican border. The lessons from her days with Teach for America resonate today in her role as a trustee of the Houston Independent School District, overseeing the public schools she’d graduated from decades earlier.

Fresh from Harvard Law School, Emily Broad Leib went to the rural Mississippi Delta to use her background to improve the lives of residents. Her work there was varied and included one unlikely task early on: Writing a grant for a wood chipper to get rid of fallen tree limbs that were drawing snakes. Now an HLS assistant professor, her experience prompted her to start the Law School’s Mississippi Delta project, which provides public policy and legal help on issues important to the community.

The trio are just a sampling of the legions of dedicated, caring, and talented individuals who over the years have brought the skills developed and passions nurtured at Harvard to communities around the country, embracing former Harvard President Charles William Eliot’s admonition, “Depart to Serve Better Thy Country and Thy Kind.” That call to public service, inscribed on Dexter Gate at the edge of the Yard, amounts to a kind of final lesson upon leaving campus.

Today the Harvard Gazette is launching a digital project titled “To Serve Better,” featuring dozens of tales of Harvard affiliates like Broad Leib, Sung, and Lockridge-Steckel who returned home — or set up shop in a new home — and worked tirelessly toward the greater good, teaching, inspiring, organizing, legislating, and persevering through setbacks.

The series website contains stories, photos, maps, links, and video chronicling the work of these individuals across the U.S. and its territories. It launches this week with the first wave of 14 from California, Georgia, Iowa, Kansas, Kentucky, Mississippi, Nevada, North Carolina, Tennessee, Texas, South Carolina, South Dakota, Washington, and Washington, D.C.

The theme for this first batch is “empower,” and the accounts highlight people who work with small groups or grass-roots organizations to strengthen their communities.

The project will eventually include sagas from all 50 states, plus additional ones from U.S. territories and the District of Columbia. They will be posted in waves with the themes of “Create,” focusing on inventors, makers, designers, and artists; “Respond,” dedicated to those who heal, fix, and provide service or aid to others; and “Improve,” spotlighting those who seek to fight injustice, solve problems, and advocate for communities at an institutional level.

While working on this project, one thing became clear. While the range of their experiences was wide and varied, all of those profiled shared a similar goal. Take Theresa Reno-Weber, a 2008 Harvard Kennedy School graduate, former U.S. Coast Guard lieutenant, and president and CEO of Metro United Way in Louisville, Ky. This is how she explained what drives her to the work she does: “At my core is a desire to leave any place better than I found it, including the organization in which I work or the community in which I live.”