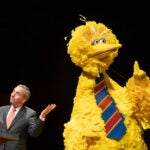 The Muppets come to Harvard

For Yvette J. Jackson, every sound leads to discovery. Jackson, who joined Harvard as an assistant professor in the Department of Music this fall, is a composer of electroacoustic, chamber, and orchestral music, with a focus on radio operas and immersive narrative soundscape productions. Her work is performed in concert venues, as part of theater works, and in art installations. Jackson’s goal is to help students explore the unexpected ways sound can tell a story. In addition to teaching in the Department of Music’s Creative Practice and Critical Inquiry graduate program, Jackson also teaches composition and theater courses in the Department of Theater, Dance & Media.

GAZETTE: What comes first for you when starting to create a piece: the sounds you want to use or a theme you want to explore?

JACKSON: I like to work with stories rooted in historical events or social issues. I’ve created a series of pieces about the Middle Passage and the stories of enslaved Africans, with seven compositions in the series to date. The research for the series has involved looking at everything from diagrams about how to pack human cargo into ships, to trade routes, to narratives of enslaved people. The Library of Congress has an archive of interviews with people who were born into slavery, and I listened to them tell their stories in their own voices. In one electroacoustic composition, “Swan,” I immerse the listener in the story, starting with historical fiction and then moving into Afrofuturism to question what freedom even means. Another, separate piece, “Invisible People,” is a sonic essay based on President Barack Obama’s approval of marriage equality in 2015. It’s a radio opera with found text from things people have actually said or published, and I wanted to explore different perspectives and media on the topic. I wanted to respond to responses from leaders in the African American community to that announcement, because there were no women or queer people represented in that group. I called the piece “Invisible People” because I was asking: Who is left out of this conversation?

GAZETTE: How does sound tell stories in ways that other media can’t?

JACKSON: As part of my practice, I developed something that I call narrative soundscape composition. It’s a dialogue between creative practice and research — they feed one another. One example is my interest in acoustic ecology or sound studies. When I was living in Southern California, I was constantly bombarded by the sounds of leaf blowers, helicopters, military jets, traffic, and the sounds of neighbors. I began to question things like noise laws and the effects of certain frequencies on the body, and thinking about how sounds that penetrate the domestic space affect one’s body. The piece is called “Atkins-D73”and I worked with many field recordings on that soundscape, exploring these questions through research and through sound itself. I like to use sound to immerse the listener in an experience through multichannel compositions. An example is a site-specific composition in my Middle Passage series called “Destination,” for 140 speakers at the Cube, a theater and lab at Virginia Tech. When there is a scene set in the hull of a cargo ship, the immersive experience becomes very powerful.

An audio excerpt and storyboard image from “Swan,” courtesy of Yvette J. Jackson.

GAZETTE: Do you work on many pieces at once, or is it important to finish one composition before embarking on a new project?

JACKSON: Each thing I do has an element from a previous piece in it, so there’s a kind of continuity to my work. Usually, at one time I’m working on something big and some smaller things. I’ve started the planning stages for a piece inspired by Samuel Delany’s “Babel-17,” a science-fiction novel about linguistics and the economy of language. I’m revising an old orchestral score that hasn’t been performed yet. I also create works that incorporate fixed [recorded] media and live ensembles and want to devote more time to this, and I’m also exploring ways to integrate microcontrollers into performance.

GAZETTE: What is it like to bring performance, art-making, and academic inquiry together as a professor?

JACKSON: For a long time, I’ve worked in music, did sound design for theater, and worked in education, vacillating between those worlds. This opportunity has brought them all together. I’m teaching “Introduction to Composition” [Music 4] and a proseminar in composition on “Composing Theatre” [Music 160] right now, and the students are awesome. We’ve done some workshops using light, movement, working with technology and creating tools that are gestural to create sound. The students came into the courses already thinking outside of the box in terms of how to use sound. In Music 4, we’ve had great discussions about things like the question of silence and whether it is music. My proseminar class went on a field trip to the Harvard Art Museums to look at pieces by Kara Walker, David Alfaro Siqueiros, Lewis Rubenstein, and Herbert Bayer. The idea was to consider how narrative is composed visually and to think about how images can be used as a score to compose a performance based on social issues. The students will choose issues that are meaningful to them as the basis of their composed theater projects. I find out something new every day about Harvard and what I can do here with my students, and I feel like that will continue for a long while. I’m just scratching the surface.