A stand-up stands up for migrants and immigration 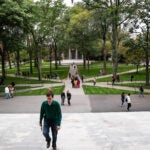 At one point in her childhood, Cristela Alonzo lived with her undocumented family in an abandoned diner in a tiny town in south Texas, on the U.S.-Mexico border. Today, the comedian weaves the experiences of her difficult-yet-joyful upbringing into stand-up humor, which she shared Wednesday at the Weatherhead Center’s third annual International Comedy Night, a signature event during Worldwide Week. Vice Provost for International Affairs Mark Elliott and members of the Weatherhead Center for International Affairs (WCFIA) posed some slightly serious questions to Alonzo a few days before the show.

WCFIA: What were your associations to the border when you were a kid, and how have those associations changed?

alonzo: Right now, there’s a lot of discussion about ICE [U.S. Immigration and Customs Enforcement]. But if you grow up in a border town, you’ll understand that we’ve actually had similar problems and interactions with the Border Patrol all along. I come from a mixed-status family: half of us were undocumented, half documented. As a kid, I was very used to getting asked by Border Patrol agents questions like, “What’s the name of your school?” “Who is your favorite teacher?” to make sure I was actually an American citizen. You start thinking that’s normal, because that’s all you know. It isn’t until you get older and you realize, oh, that’s not normal. Also, when I was small, we didn’t need passports to go to Mexico.

WCFIA: What would you like people to know about your hometown?

“… my goal is always to talk about where I’m from in a positive way, because it’s so hard to counter that perception if we’re never allowed to show that side on TV.”

alonzo: Everyone talks about immigration, but we never talk about the economic impact of the border. My hometown area brings in almost $4 billion to the U.S. economy every year. Mexicans will come to the United States because the quality of the products here is better than the ones they have at home. People come here in their cars and go to a Walmart or Target and stock up on shampoo, conditioner, and household goods. They go back to Mexico at the end of the day. Unless you live in a border town, you don’t know that.

WCFIA: Some prominent media outlets routinely call migrants “illegal criminals.” As a Mexican American comedian, how do you deal with such extreme stereotyping?

alonzo: Certain media would like to dramatize a story as if we’re always on the run and always worried about cartels and violence. My hometown is a really cool little area with a lot of good people. That’s why my goal is always to talk about where I’m from in a positive way, because it’s so hard to counter that perception if we’re never allowed to show that side on TV. People assume that we’re always crying and always worried. There’s so much more to it; we’re just like any other town in this country. We have great people and we have some bad people. But that happens everywhere.

WCFIA: You sometimes work as an advocate for low-income families. How has life materially changed for people living in the border areas near your hometown, including your family?

alonzo: Where we are politically right now, we have problems. I have a sister and a brother who were born in the United States. They can’t get passports right now. They’re American citizens. They have Social Security numbers, birth certificates, driver’s licenses. What more do you need? Some people can’t get passports because now the government wants more paperwork. They want school records. They want a lease from the place where you used to live.

I will say that the community right now in my hometown is very scared. I’m a board member of a nonprofit that focuses on low-income communities with attention on immigration. The undocumented community is terrified. And people who are documented are terrified because of all these extra rules and guidelines. We are given these fears, but we don’t get the chance to learn about rights. Many people think they don’t have any rights. Overall, we’re used to it, but we are completely preoccupied with this now, more than we were before.

In the past year, the White House has made the rules stricter to get passports. In my area, there were a lot of midwives who would help deliver babies, so there were no hospital records. The midwives would fill out the paperwork for the birth with the county or city a few days later. So now the administration says, how do we know they were really born here and not in Mexico?

“I have a sister and a brother who were born in the United States. They can’t get passports right now. They’re American citizens.”

WCFIA: When we hear reports that our president suggested putting alligators and snakes in a moat at the border and shooting migrants in the legs to slow them down, we don’t know whether to laugh because it’s a joke, or cry because it might actually be true. Is it OK to use humor to try to cope with these painful political issues?

alonzo: It is absolutely mandatory that we use humor right now, because if we don’t, it’s not mentally healthy for us. We’re all human and we reach a breaking point. The thing with the moat … In Texas a lot of cowboys like to wear alligator and snakeskin boots. So the joke was: “Well they’ll put in the moat and a week later we’ll have these badass boots.” That’s the defense mechanism. You use humor to protect yourself, because if you see the reality of it, it’s too much to bear.

Through humor, you can actually educate people more on issues, as if you are tricking them into learning.

WCFIA: Your first job in comedy was answering phones at a comedy club. How did you ever raise the topic with the club manager and ask for a chance to go onstage?

alonzo: It didn’t happen like that at all! I answered a help wanted ad, and it didn’t say the name of the business, and so I show up to the place and it’s a comedy club. I love stand-up comedy so I’m like, yeah, I want to work there. I didn’t want to do stand-up at that point, I just wanted to be around it.

While I was working there, comics would tell me they thought I was funny, but I didn’t think much of it. But then I decided to try it, by taking a stand-up comedy class. My first set was on Labor Day of 2003. I still have the video. After that, I was hooked. But I couldn’t perform at the place where I worked. A lot of times, it’s hard for owners to see you as a comic if they don’t meet you as a comic first. I had to go do open mics at other places around the city first. It took a while for me to get sets at the club where I worked. 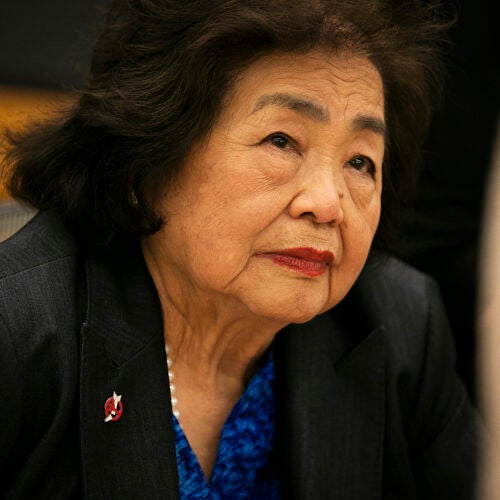 Hiroshima survivor recalls the bombing, the devastation that followed, and her life as a disarmament advocate 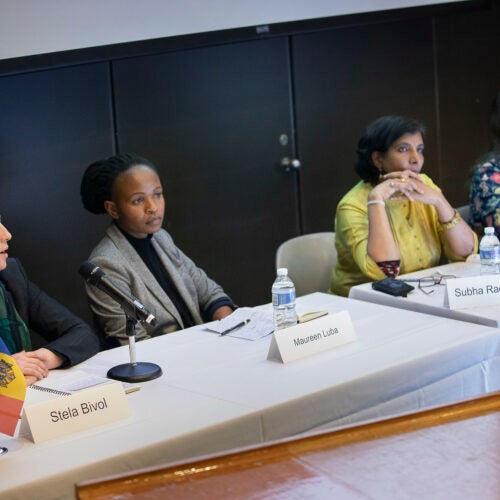 WCFIA: Do you have any advice for the aspiring comedians in the Harvard College Stand Up Comic Society?

alonzo: Do you really like comedy? I always ask people that first, because if you love it, you’ll find a way to do it. So many people say, “I’m gonna give comedy five years and if it doesn’t work I’m going to find something else.” Five years? What do you do in five years? It’s not like college! If you love it, you keep at it.

The biggest mistake when we start is to write things we think the audience will laugh at. The audience is different every single night you perform. So, the best thing to do is to write what is true to you, or funny to you, and then you’ll find the people who connect to it. If you write something that’s not true to you, it comes across as contrived, and you have to work too hard to keep it up.

WCFIA: You went to college but didn’t finish. Ironically, that seems to be a key criteria for getting an honorary degree at Harvard, since, you know, both Bill Gates and Mark Zuckerberg dropped out. Do you ever think about going back to college to finish your degree?

alonzo: I would love to go back to graduate. I had to drop out to take care of my family; it was heartbreaking because I love learning. But we all know college is not cheap. I was a theater major and I ended up doing what I wanted to do for a living. If I went back to college, I would actually like to study something different.

I’ve always thought about focusing on nonprofit organizations — how they work, how to set them up — or getting a political science degree. I love working in the city and doing advocacy work, and I would consider running for office back in my hometown area. I want the knowledge and background to tell people that I take this job seriously. It’s not something that I want to do on a whim; I really want to help.

In 2014, Alonzo became the first Latina to create, produce, and star in her own network sitcom, “Cristela” for ABC. During that same year, she split her time between L.A. and New York City to serve as a guest host on “The View.” In 2017, Alonzo became the first Latina lead in a Disney Pixar film when she voiced the part of Cruz Ramirez in “Cars 3.” Her first stand-up special, “Lower Classy,” is currently streaming on Netflix. Alonzo’s memoir, “Music to My Years,” was released on Oct. 8 by Atria Books. She will perform at WBUR’s Cityspace in Boston at 7 p.m. on Saturday.

“Life and Death on the US-Mexico Border.” Read Ieva Jusionyte’s essay,  about injuries on the U.S.-Mexico wall and other stories about international border issues by Weatherhead Center scholars, on the blog, Epicenter.