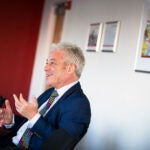 On the Brexit hot seat

Rex Tillerson had seen and learned much in his 41-year career at ExxonMobil Corp., and some of it proved useful in his 13 months as U.S. secretary of state.  But in the end, most of the thorniest challenges the former chairman of the multinational oil giant faced had more to do with his relationship with his boss, President Donald Trump, than with the complexities of geopolitics.

That was the overarching message from Tillerson who visited Harvard Tuesday for a private talk about his time as the nation’s top diplomat, a probing 90-minute discussion in which he spoke fluently on issues in global hotspots from North Korea, Syria, and Iran to the negotiating styles of world leaders, including Trump.

In panel interview with Professors Nicholas Burns, who runs the Future of Diplomacy Project at Harvard Kennedy School (HKS), Robert Mnookin, faculty chair emeritus of the Program on Negotiation at Harvard Law School (HLS), and James Sebenius, who heads the Harvard Negotiation Roundtable at Harvard Business School (HBS), Tillerson’s daylong visit was organized by the American Secretaries of State Project, a joint initiative run by Burns, Mnookin, and Sebenius, who each lead programs on diplomacy and negotiation at all three Schools.

Tillerson, who had extensive experience negotiating directly with heads of state as an oil executive, offered a number of informed assessments of the motivations and tactics used by Russian President Vladimir Putin, whom he first met in 1999, China’s president Xi Jinping and Israeli Prime Minister Benjamin Netanyahu, whose 10-year reign appears in doubt after Tuesday’s election. He called Netanyahu “an extraordinarily skilled” politician and diplomat, albeit “a bit Machiavellian,” who forges good and “useful” relationships with leaders and nations he anticipates he’ll need at a future time.

Tillerson said despite Israel’s closeness with the U.S., “In dealing with Bibi, it’s always useful to carry a healthy amount of skepticism in your discussions with him,” recounting that Israel would share “misinformation” to persuade the U.S. of something if necessary.

“They did that with the president on a couple of occasions, to persuade him that ‘We’re the good guys, they’re the bad guys.’ We later exposed it to the president so he understood, ‘You’ve been played,’” said Tillerson. “It bothers me that an ally that’s that close and important to us would do that to us.”

When he entered office, Tillerson, who had deep familiarity with leaders and issues in the Middle East, including conditions surrounding the Israel/Palestine peace negotiations, said he thought there was a chance — finally — for peace.

“I did believe that we were at a moment in time where perhaps we could chart a way where the Arab world could support an outcome that the Palestinians might not think was perfect — and in the past, if it wasn’t perfect, it didn’t happen — but with enough encouragement, pressure from the Arab world, that we could get it close enough that the Palestinians would finally agree,” he said. “And in my view, it was a two-state solution.”

But his plans were hampered by a frosty relationship with President Trump, who solicited foreign policy advice from an array of outside sources and delegated several key portions of the portfolio, like drafting an Israeli/Palestinian peace accord, to his son-in-law, Jared Kushner.

So, in the end, Tillerson took a back seat on most issues involving the Middle East and served as an informal counselor, offering his input “to help them identify obstacles or gaps to the [peace] plan to give it the highest chance of success,” he said.

Even though he is no longer in office Tillerson still keeps an eye on developments in the region. Asked what he would have recommended the U.S. do in response to the bombings on Saudi oil facilities, Tillerson said it was vital to wait until forensics can provide the best available information about who is responsible before taking any action, something he acknowledged “may be very hard to do.”

“I have no doubt we’re going to find Iran’s fingerprints on this attack, but we may not find their hands on it,” he said, complicating a coalition response.

Tillerson said the U.S. should take its case to the U.N. Security Council and build a global coalition for additional sanctions, rather than trying to implement unilateral sanctions, a move he said Iran can manage.

On Wednesday morning, Trump said he will “substantially increase” sanctions on Iran, though the administration did not formally declare Iran responsible.

While he was often thwarted on foreign policy, Tillerson admitted his own missteps in undertaking a sweeping overhaul of the State Department and instituting a one-year hiring freeze, while the Trump administration slashed the budget from $55 billion to $35 billion in 2017. Sixty percent of top career diplomats resigned and applications for foreign service jobs fell by half during his term, according to American Foreign Service Association.

Early on, it was “pretty evident” to him that much of the department was outmoded, from management practices and some of the systems to IT, and there was no clear delegation of authority, as he was used to in the private sector, so he had a hard time understanding “how decisions are made, who’s got authority to make what decisions and who’s accountable,” he said.

Tillerson defended the freeze as a way to get managers to reassess their staffing needs and to avoid having new hires be fired in short order if the budget went further south. He also hoped the move would buy him time to lobby the Office of Management and Budget and “see if I couldn’t change their mindset on it where they were just slashing and burning it.”

Fifteen of the overhaul recommendations were funded by Congress and implemented, though there’s more room for modernizing State Department management practices and embassies.

Though necessary, Tillerson concedes the pace of his revamp may have been “a little too aggressive” for many “and the level of change was so dramatic for a lot of people in what was already a very significant change from the Obama administration to the Trump administration, which was also dramatic and traumatic,” he said. “I didn’t have a full appreciation probably for just how emotional it would become for some people.”

Asked about his approach to negotiations, whether in the private sector or as the nation’s top diplomat, Tillerson said he spends 80 percent of his time in preparation. A key to successful talks?  Knowing precisely what your objectives as well as those of your counterparts. “It all goes back to people’s hopes and aspirations,” he said.

“So I did a lot of preparation to understand socially and historically, ‘what journey have these people been on that brought them to this point and what are their hopes and their aspirations out of this possibility that they could have this great economic opportunity, or in the case of a diplomatic discussion, what are their hopes and their aspirations that one day they can have a peaceful border or stop the bombing,’ ” said Tillerson. “I’ve seen more negotiations fall apart over an inability to understand those social aspects and those aspirations than fell apart over the deal.”

In stark contrast to Trump’s style, Tillerson emphasized transparency, predictability and trustworthiness as critical to his negotiating method, whether it’s with allies or with enemies.

Tillerson admitted his own frustration with the nation’s riven state. Asked by Burns what gives him hope these days, he said that it was America’s continued evolution as a society, despite the painful, even “tortuous” times.

“I always believe deep in those words from Lincoln, that in our deepest, darkest moments, we were able to call upon ‘the better angels of our nature’ to overcome that which we thought was so divisive we could never find affection for one another again,” he said.

“I watch with great anguish the mood of the country and the kind of rhetoric that goes on in public …. [and] it pains me. It breaks my heart,” said Tillerson. But I go back to Lincoln, “and my great hope is that that is still defining of the American people.”