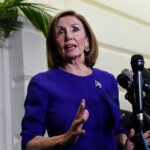 Kailash Satyarthi, the winner of a Nobel Peace Prize for his fight against child labor and exploitation, said his mission as a children’s rights activist began when he himself was a child.

On his first day of school, Satyarthi saw another kid about his age working as a shoeshine boy instead of attending class. It disturbed him so much that one day he gathered the courage to ask the boy’s father, a cobbler, why he didn’t send him to school. The answer left an indelible mark on Satyarthi.

“He told me, ‘You’re born to go to school, and we’re born to work,’” he recalled during a phone call from New York.

“It was a shock for me,” said Satyarthi, who was born into a high-caste Indian family. “I started crying because I didn’t know anything about the caste system and the hierarchies and discrimination associated with it. But I started looking at the world with different eyes, and I began questioning it because it wasn’t right.”

Satyarthi put his feelings into action. At just 11, he collected used books and created a book bank for poor children. The first rescue operation he undertook, with friends and colleagues, was to free a 14-year girl who had been abducted and was about to be sold to a brothel. As an adult he considered creating a charity or an orphanage, but instead founded an organization to defend children’s rights, Bachpan Bachao Andolan (Save Childhood Movement), which campaigns to end bonded labor, child labor, and human trafficking, and advocates for education for all children.

In 2014 he was awarded the Nobel along with Malala Yousafzai, the then-teenage Pakistani activist who survived being shot in the head by Taliban assassins, “for their struggle against the suppression of children and young people and for the right of all children to education.”

On Friday, Satyarthi, now 65, will be on campus for a screening of “The Price of Free,” a documentary about his life and mission that won the 2018 U.S. Documentary Grand Jury Prize at the Sundance Film Festival. An excerpt will be shown at 4 p.m. at Sanders Theatre at an event hosted by the Harvard T.H. Chan School of Public Health and the Faculty of Arts & Sciences. Chan School Dean Michelle Williams, the Angelopoulos Professor in Public Health and International Development, will give introductory remarks. The screening will be followed by a discussion with Satyarthi.

An admirer of Mahatma Gandhi, Satyarthi gave up his career as an electrical engineer and his high-caste name, Sharma, in the 1980s, swapping it for Satyarthi, which means “seeker of truth.” He also started working full time for his cause.

Through his organization, Satyarthi has freed more than 80,000 children from forced labor in dangerous rescue operations. Two members of his group have been killed, one shot and the other beaten to death by criminal gangs connected to companies that use enslaved children as labor. Satyarthi himself has also suffered attacks.

“They want to eliminate me and crush my organization because they feel threatened by our work,” he said. “But they are the ones in danger. They’re getting weaker, and our movement is getting stronger.”

Due to the Save Childhood Movement’s advocacy, in 1986 the Indian government passed the Child Labour Act, which prohibits hiring children younger than 14 years old for hazardous jobs. In 1998, Satyarthi led a global march against child labor across 103 countries, and a year later the International Labour Organization (ILO) adopted Convention No. 182, concerning the prohibition of and immediate action on eliminating the worst forms of child labor.

The work is far from over, said Satyarthi. According to the ILO, 152 million children remain in forced labor around the world.

“We’d like to see universities become strong champions for the cause,” said Satyarthi. “My mission in life is that every child on the earth is free; free to walk to school, free to laugh, free to play. When every child is free to be a child, only then my dream will come true.”

Admission is free but tickets are required. Tickets can be picked up at the Harvard Box Office.