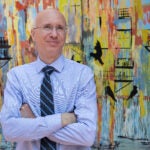 “We always begin by thanking our ancestors,” said Leah Penniman, a Black Kreyol farmer and food justice activist, at the start of her Sept. 17 talk, “Farming While Black: African Diasporic Wisdom for Farming and Food Justice,” at Harvard Divinity School’s Center for the Study of World Religions.

Penniman called into the room the memory of her grandma’s grandma’s grandma, who, prior to being kidnapped from her home in West Africa, “made this really audacious and courageous decision to gather up the okra, the millet, the black rice, the molokhia, the sorghum and braid it into her hair.”

“They knew that wherever they were going,” Penniman explained, “they believed there would be a future of tilling and reaping on the soil, and there would be some seed we all needed to inherit. That’s what our grandmothers did for us.”

The questions of “how we got to the food system we have today” and how to reconnect communities to the lands they have fled or been expelled from are urgent for Penniman. But even as many young people of color seek to get back to farming — the “returning generation,” she calls them — barriers to agricultural education and disparities in ownership of farmland in the United States are as stark as ever.

Penniman, who has farmed since 1996, is the 2019 winner of the James Beard Foundation Leadership Award. She co-founded Soul Fire Farm in Grafton, N.Y., and in 2018 published “Farming While Black,” a practical and political how-to guide for aspiring African-heritage growers to reclaim their inheritance as agriculturalists.

Penniman traced duel threads in the history of America’s food system: stolen land, both from indigenous people and from black farmers, and stolen labor in the form of slavery and sharecropping.

The roadblocks black farmers faced to building intergenerational wealth — like being denied loans in the era of redlining and terror campaigns that drove black families from farms they owned in the South — added up, she said.

“There’s some folks of every generation who remembered there’s some seeds left in their hair from their ancestors,” she said, and it is those same folks who pick up and continue the lineage of the black and indigenous land sovereignty movement.

Soul Fire Farm has trained people of color in the Afro-Indigenous technologies of regenerative farming, the ways of working the land that are now the go-to methods of sustainable and organic agriculture.

Central to her work is integrating the scientific and spiritual dimensions of farming.

When they plant seeds at Soul Fire Farm, she said, they dance “to give thanks for the soil and pray for the rain, to sing our ancestors’ songs and feel our ancestors’ movements in our bodies. That’s real, real important because the Earth actually is alive.

“The fact is, the land has always had our back,” said Penniman, a Manye, or queen mother, in the Vodun tradition. “When we fled to Pittsburgh and Boston … we left a whole piece of ourselves back there in that soil and I think our generation is realizing there’s something to go pick up to feel whole. Our people are yearning.”

Harvard Divinity School professor and Center for the Study of World Religions director Charles M. Stang said Penniman’s work lies at the crossroads of two of the Center’s programming missions. It illuminates the ways religious and racial hierarchies have “wrought great injustice in this world” while also looking “for resources for our ecological imagination in the so-called non-human, or perhaps better, more-than-human world, beings with whom we share this fragile Earth.”