Soft robots for all 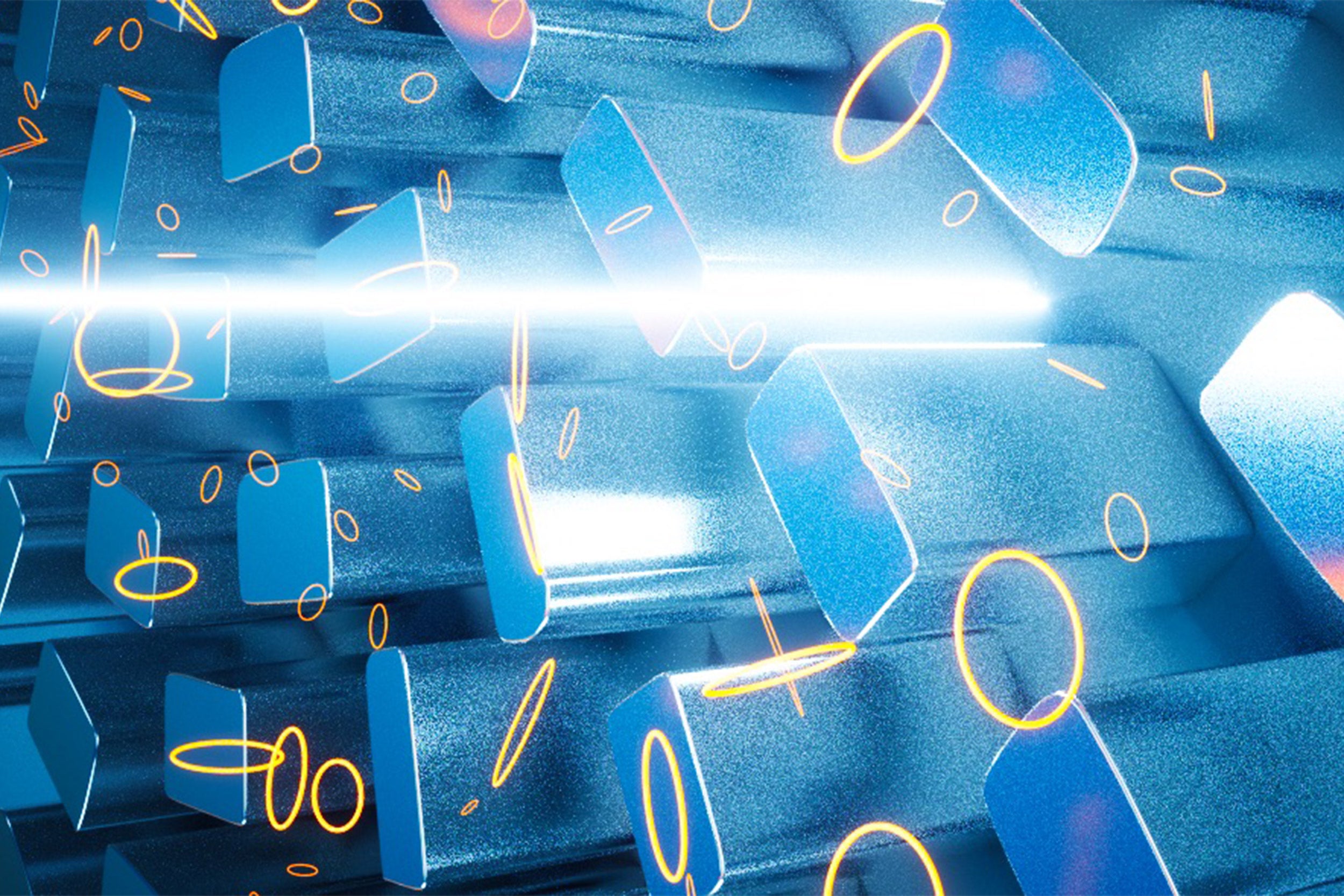 But each year, soft robots gain new abilities. They’ve learned to jump, squirm, and grip. And they can handle tomatoes without bruising the fruit, emerge unscathed after being run over by a car, and journey through radiation, disaster zones, and outer space, all without the challenges facing their harder peers. For people and animals, they have a “cooperative function”: a soft touch.

Recently, researchers in the lab of George M. Whitesides, the Woodford L. and Ann A. Flowers University Professor, have invented soft replacements for the last hard parts required to build a robot. Instead of electricity and wires, pressurized air expands and contracts rubber inflatables to create movement, soft valves take over for the hard, and soft digital logic replicates the same capabilities of an electronic computer.

“It’s another tool in the toolkit to make these smart, soft robots without any electronics, and without any hard valves,” Preston says.

Until now, ring oscillators were made with electronic transistors or microfluidics. Electronics always require hard components. Most microfluidics do, too. Many use glass for their pressurized water or air systems. Preston’s macroscale pneumatic ring oscillator relies on inverters and air. They manipulate the air pressure in his robot’s rubber tubes: If the input is high pressure, the output will be low pressure, and vice versa. When three or other odd numbers of gates are connected in a ring, one gate’s shift triggers the next, which triggers the next, and on and on.

“The cool response that you get when you combine an odd number of these inverters in a loop is an instability that travels around the loop,” Preston says. He likens it to a Slinky that collapses in order to spring down a flight of stairs, creating a constant pace without the need for another push.

To test what the soft ring oscillator could do, Preston and his team created five prototypes. Each uses a single, constant source of air pressure to run three pneumatic actuators (the inverters).

One prototype nudges a ball around a ring. Another undulates a stage to keep beads of two different sizes rolling against the edge. Eventually, all the smaller beads fall through a hole in the side of the stage. They sort themselves out.

“The ring oscillator is really good for things like rolling motions,” Preston says. Rolling requires coordination of several actions in time. A single input and output will not suffice. For example, to get their hexagonal foam robot to roll forward, the ring oscillator helps inflate a balloon behind the robot and deflate one in front at the exact same time. The coordinated push-and-release shifts the hexagon forward again and again as the balloons inflate and deflate in perfect sync.

Yet another prototype provides a more tangible purpose. A textile-based sleeve, wrapped around the lower leg and secured with Velcro, exerts coordinated pressure, “pumping” fluid up the leg. According to recent studies, this pumping motion improves symptoms of lymphedema and chronic venous disease better than simple compression. The device could also help nurses, waiters, and police officers prevent deep-vein thrombosis, a result of working long shifts on tired feet.

Before they start clinical trials for the sleeve, the team wants to gauge interest. If enough people crave a softer, less-expensive way to alleviate and prevent symptoms, the product might find a big enough market to merit further research.

The low cost of Preston’s materials — rubber-like silicone elastomers — make them ideal for more than just inexpensive home care. Biocompatible, disposable, gentle, and sterile versions could be used for lab experiments, drug delivery, or even medical devices inside the body like a sleeve that helps the heart beat that was developed by Harvard and Boston Children’s Hospital researchers. Preston’s final prototype can sort three different colored liquids based on a predetermined sequence and time, a tool that could prove useful for chemists.

Preston expects his innovation to result in far more applications than the ones he demonstrated in his five prototypes. Since the paper explains how to replicate and customize the design, he hopes other labs will find even more uses. “People can use the soft ring oscillator for a lot of different applications in soft robotics, some of which we may not have even thought of or envisioned yet.” 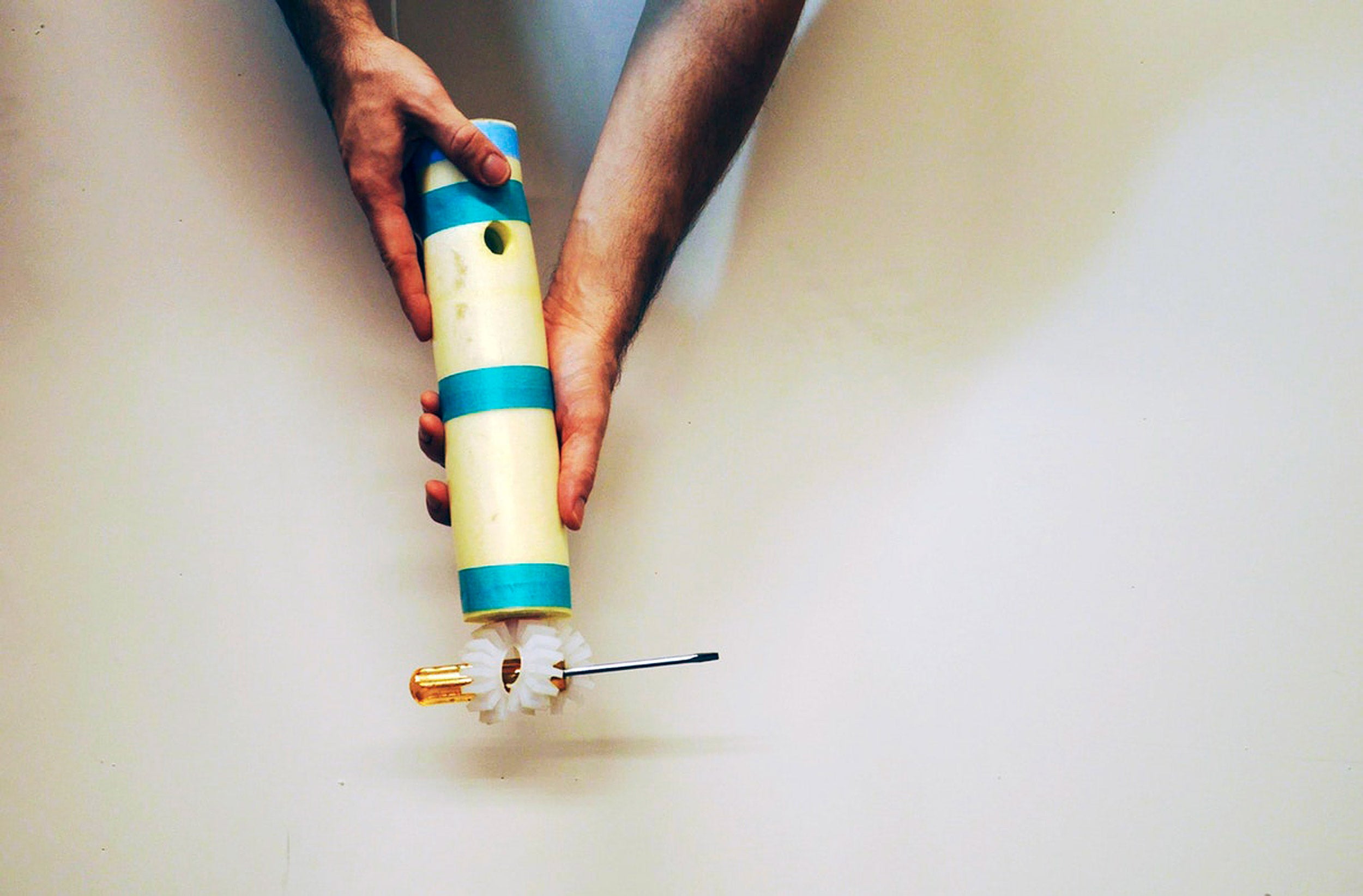 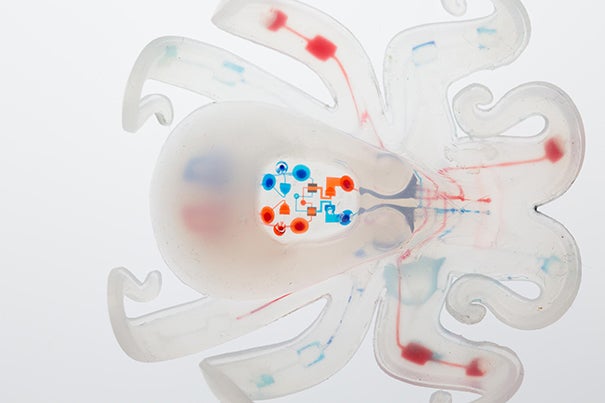