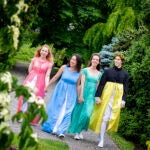 When night falls on Harvard’s Arnold Arboretum the landscape is transformed — towering trees assume ominous forms, leaves rustle, bushes stir. It is the perfect setting, the Boston Ballet decided, to shoot a promotional spot for its season opener, a ghost-filled, romantic ballet set in medieval Germany.

“When we were brainstorming ideas for our fall ballet, ‘Giselle,’ we knew our key scene was going to be the forest,” said Kristin Carr, the company’s director of creative services. “The main character, Giselle, dies of heartbreak and is buried deep in a forest haunted by Wilis — ghostly apparitions of folklore, girls who have died betrayed by their faithless lovers on the eve of their weddings.”

The company was drawn to the Arboretum’s Tilia collection, a grove of sweet-scented lindens planted at the turn of the 19th century, but the space was attractive for other reasons, too. Carr said the dance company looks for opportunities to take the ballet out of the studio, creating engaging content by making use of Greater Boston’s landmarks.

Ballet Master Larissa Ponomarenko, who is staging the show, said that all of the action happens outdoors, and the Arboretum’s “ponds and grand old trees” made a fitting backdrop for a work that is at times romantic and other times dramatic. “We are thankful for the opportunity and the welcoming gesture of Arboretum team for letting our creative process merge so closely with natural environment of the park,” she said.

On the day of the filming the Boston Ballet production company — including artistic directors, film crew, costume and wardrobe personnel, and hair and makeup artists — arrived in the afternoon with principal dancers Viktorina Kapitonova and Patrick Yocum for a daylight shoot near Dawson Pond. Dancers performed the famous “he loves me, he loves me not” scene there before moving into the North Woods.

Yocum, a principal dancer with the Boston Ballet since 2009, said performing at the Arboretum was like nothing he has done before, as outside shows are typically done on a special stage with a sprung floor.

“This is an incredible experience. It was so easy over by the pond. Everything is so curated and cut so cleanly,” he said. “It’s the most beautiful spot in Boston.”

Arboretum Director William “Ned” Friedman agreed. “As the Arnold Arboretum continues to engage with other important cultural institutions in Boston, this opportunity to welcome the Boston Ballet seemed perfect.”

As the sun went down, a humming generator powered studio lights and a fog machine, creating a magical ambiance. A quiet rumble echoed through the woods and ethereal dancers entered the living set before a small audience of crew, chipmunks, squirrels, and a few passersby.

In this part of the Arboretum, the Tilias stand up to 130 feet high with trunks exceeding 100 inches around. The leaves resemble lopsided hearts, and according to folklore symbolize love, healing, and good luck.

“Gisele” premiered in Paris in 1841 and is considered one of the greatest romantic ballets of all times. The Arboretum was founded in 1872, and the Moltka linden tree, planted in 1902, served as the point at which dancers became dreamlike figures in the fog.

“The ghostly women are part of the forest and are integral to the story. You couldn’t have a better location that will capture that,” Yocum said. “To do this at night out in the woods on location is amazing.” 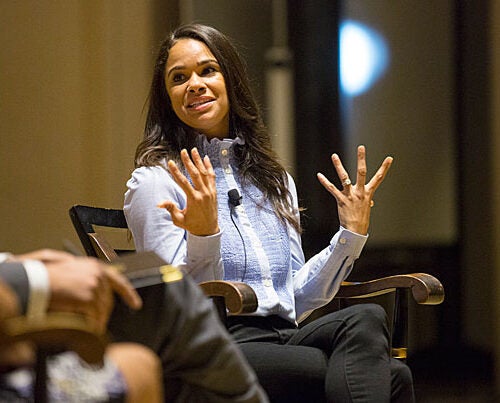