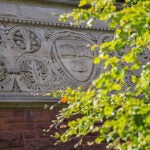 Emotion overtook Kathryn Kearney ’17 as, with tears streaming down her cheeks, she stepped up to the table to meet Misty Copeland.

“You’ve inspired me to start dancing again,” the 22-year-old told the famed ballerina, who smiled warmly and thanked Kearney as she handed her an autographed copy of her book, “Ballerina Body: Dancing and Eating Your Way to a Leaner, Stronger, and More Graceful You,” as part of Copeland’s visit to the Harvard campus.

Dabbing her eyes, Kearney tried to explain her incredulity. Her mother had purchased five Misty Copeland Barbie dolls when they came out last year, and seeing the real-life inspiration for the doll gave the College senior, who is concentrating in social anthropology and Theater, Dance & Media, a sense of affirmation. Copeland’s story had helped her overcome own struggles.

“I quit ballet when I was a teen because being a black ballerina was painful and degrading. It means something to see someone like you doing what you want to do — to have that representation,” Kearney said. “Constructions of the black ballerina body are problematic. There’s a mold they don’t see us fitting in. She’s the one showing the mold shouldn’t exist and that, despite the mold, you can excel.”

At 5 feet 2 inches, Copeland still made for a towering presence in a lively conversation in Lowell Lecture Hall with captivated College students and young dancers visiting from the Stajez Cultural Arts Center in Randolph, Mass.

Sponsored by Winthrop House with the Office for the Arts at Harvard Dance Program, the 34-year-old American Ballet Theatre (ABT) principal chatted with Faculty Deans Stephanie Robinson and Ronald Sullivan Jr. last Monday afternoon about everything from her late start in ballet (at age 13) and what a typical day is like to her battles with racism within the discipline.

“I was the only black woman in a company of 80 dancers, and that went on for a decade, and it really starts to wear on you, on your confidence. I questioned whether I belonged here,” she said. “I had no one to connect to on a deeper level who understood the journey I was on and the obstacles I was still trying to overcome from the challenges of growing up the way I did.”

Copeland spent her youth in southern California, where she lived on welfare with a single mother and five siblings, and little access to organized sports or the arts. Her introduction to ballet in the form of a Boys and Girls Club class was an awakening for this self-described introvert.

“It gave me a voice without having to speak, and I’d never had that before,” she said.

Her rise at the ABT was brisk, as she became an apprentice at 17 and then two years later was promoted to the main company’s corps de ballet. Still, she found herself contending with close-minded ideas of beauty.

“It took me a long time to understand and dissect the words that a lot of minority and black dancers in particular, hear …  ‘You don’t belong in the classical ballet world because your feet are too flat. Your butt is too big,’” she said, as the audience snapped in agreement. “I see dancers who are professionals who have these bodies who are white. Why am I being told my breasts are too big? Why am I being told my body is too muscular? It’s code language for your skin is wrong.”

There were lighter moments to the day, including Copeland’s introduction by Sullivan and Robinson, the first African-American faculty deans at Harvard. Pointing to a tray of pastries set out at a breakfast before the discussion, Sullivan said: “I imagine from your book you don’t want any of that.”

Indeed, beyond recalling a Krispy Kreme binge, “Ballerina Body” is about finding strength through positive relationships (mentoring), meditation, and healthy eating. In the book, Copeland shares more than 30 recipes for favorite foods (such as Raw Barres made with coconut, cashews, dried cherries, and sesame seeds). On stage, she gave the audience a window into her typical day: morning in the ballet studio, followed by seven hours of rehearsal. She rests on Sundays and uses Mondays for travel, to promote her books, or to film ads for her corporate clients. She begins her portrayal of Kitri in “Don Quixote” shortly.

“It’s about the journey and enjoying and loving the body you’re in now and enjoying the process of getting to wherever you want to go,” she said.