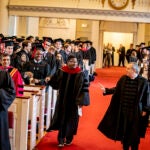 Luke Martinez was in Berlin when DJ Saskia was born.

By day, Martinez was working as an intern at the famous COLORS studio, a music platform with artists from around the globe, while at night, a proto-Saskia was exploring the city’s pulsating club scene, when the idea came for a house and techno music loving character.

And so an alter ego was born of Martinez’s experience in the German capital.

Saskia is a disc jockey, a producer, a performer, and, perhaps above all, the embodiment of the energetic, safe, and open environment of Berlin’s club scene, particularly among its queer and transgender communities.

Wanting to share that with the bisexual, gay, lesbian, transgender, queer, and questioning student community (BGLTQ) at Harvard, Martinez — along with fellow organizer and roommate Casey Goggin ’19 — created a fantasy world around Saskia. Almost like a Greek mythology origin story, except Saskia’s was centered on themed campus dance parties.

“Falling into fantasy is kind of where I feel safest, because of my identity and because of people out in the world who don’t like what I look like [or dress like],” Martinez said. “A fantasy that I can create, a world that I control, always feels safer to me.”

The parties, five in two years, were not only Martinez’s way of sharing that feeling with others, but also thumping hits, drawing big crowds and providing the type of space Martinez, Goggin, and other team members envisioned.

It also brought people together around a core element in Martinez’s life: music.

“I’ve always been obsessed with the spaces beyond words and the ways that art can help access that,” Martinez said. “Every time I play music or listen to good music, it’s a full-body experience.”

Music is a longtime passion for Martinez, who even before arriving at Harvard from San Antonio had released a six-song EP. Setting out to explore the scene here, Martinez played bass in a band for the first-year talent show and worked at the student-operated radio station, WHRB (95.3 FM), and as an audio engineer at the student-operated Cambridge Queen’s Head pub.

By the end of sophomore year, Martinez was managing the Recording Studio at the Student Organization Center at Hilles (SOCH), guiding students through producing and recording their own music by training them on the equipment and even mixing some of their tracks. Helping them hone their sound has been fulfilling, Martinez said.

“One of my favorite things about being around other artists is seeing what they make when given the freedom to do so,” Martinez said. “The Recording Studio has allowed me to encourage people to take their own path and realize that art is their own journey to self-actualization.”

Last year, Martinez, a music concentrator, released a six-song EP titled “Communion.” More recently, Martinez submitted a pop album as part of a creative thesis on the intersection between pop music and affect theory. In the thesis Martinez explores how pop music is used to mold people’s interests and is molded by people’s interests.

It was the Department of Music’s first pop music creative thesis.

Coming soon from Martinez is “Saccharine,” an album inspired by the thesis and the concert organized as part of it.

Martinez’s postgraduate plans are to move to Chicago and keep exploring a career making music.

“I hope there are people afterwards who continue to organize and who continue to create space,” Martinez said. “I hope that people can find and are encouraged to create their own communities here. Because that’s what Saskia’s was for me. I built my own universe to live in. And I invited other people to live there with me.”