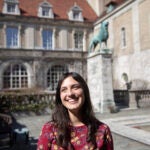 If one mission of a minister is to bring people together, Aric Bernard Flemming Jr., M.Div. ’19, was born to the role. Only, perhaps not precisely in the way he or his family envisioned.

The son and grandson of pastors, Flemming began preaching in his grandfather’s Atlanta church during his freshman year at Morehouse College. Flemming’s father, for whom he was named, had been poised to take up the leadership of the church when he was killed by a drunk driver in October of 1993. His son was born five months later and, as he finishes his degree, seems destined to take up the family mantle.

Flemming’s pastoral agenda is, thus, personal as well as professional, but, for a while at least, he has other plans. “For a long time, I have wanted to do music,” says Flemming, who both sings and composes. “But growing up, there was always a disconnect between being able to do music and do ministry,” he explains about his grandfather’s church, “If you were a preacher, you couldn’t sing, and if you were a singer, you couldn’t preach.”

Flemming was musically active through high school, singing with a rap group that released an EP. When he went to college, however, he believed he had to put away such dreams. In their place, he looked for ways to turn individuals into reverent communities. At Morehouse, he befriended other young preachers with whom he practiced honing his ministerial skills.

“Before I knew it, I was ready to actually develop a whole sermon,” says Flemming. “I had them inside of me. My grandfather knew it the entire time.”

Flemming’s skill and determination flourished at Harvard Divinity School, in terms of both secular and spiritual leadership: he has served as vice president of the Harvard University Graduate Council and as a seminarian. When a group of students sought a black worship service, he helped create the Black Student Ministry, which is now sponsored by the Memorial Church. He cited the diversity of the Harvard community as helping him grow spiritually as well as intellectually: “Moving away from exclusive practices and seeing value in everybody, in the sacred dignity of every human being.” As Commencement approached, he talked about upcoming plans to facilitate a BGLTQ Bible study with the BGLTQ office.

“Students are spiritually hungry,” he says, reflecting on his experience as a proctor and in the Office of Student Life. “I’ve seen students in need of spiritual spaces where they can engage.”

Flemming had originally intended to continue this work by pursuing a doctorate. When he decided on a master’s, however, he realized he had a year to himself. Committed to another season as a proctor in Wigglesworth Hall, he is giving himself over to what he calls his “year of creativity.”

“I’m just going to pour myself into my art and not really worry about the future,” he says. “Performing, recording, writing — just everything I can get my hands on, I’m going for it. I’ll probably never have a wide-open opportunity like this again,” adding that moving from the structure of academia to a world of artistic exploration is “scary, but I have to find courage to go forth in this. It’s a real leap of faith.”

Flemming has already released several songs on Spotify and recently made the move to iTunes. He points out that music is an extension of — rather than a diversion from — his ministerial outreach.

His music, he says, “is rooted in my gospel self. It’s rooted in where I come from and the preacher in me. I’m writing the songs but they’re really sermons.”

Citing as influences the gospel-rooted soul and rhythm and blues of artists like Aretha Franklin and Luther Vandross, he has come to believe art can create another kind of sacred space.

“What I’m realizing,” he says, “is that I want a spiritual experience for everybody who comes in contact with my music.”

Preaching, he explains, is not that different from singing. “I want to bring those methods to a concert space,” he says, “where we can create a euphoria within a moment, a collective experience for everybody.

This upcoming musical year may not be what Flemming or his family had initially expected. It is in many ways, however, the culmination of his time at Harvard Divinity School. When he receives his diploma, he will see his father’s name in his. “I want to carry him,” he says, as he makes his own first steps into his future.