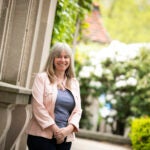 Most people prefer to avoid difficult conversations. Not Mahnoor Ali.

She graduates with a concentration in comparative literature, a secondary in Near Eastern languages and civilizations, a citation in French, and a commitment to fostering dialogue among individuals with different perspectives.

In addition to her academic focus on topics such as identity and privilege, she has chosen extracurricular pursuits that encourage thoughtful social interactions. An intern at the Harvard Foundation for Intercultural and Race Relations, a Peer Advising Fellow, and a student guide at the Harvard Art Museums, Ali has enthusiastically embraced the Foundation’s mission to “enhance the quality of our common life.”

“This institution is a shared space in which we should all have equal stakes, and in which students of all backgrounds should have equal access to opportunities and resources,” Ali said. Her internship in particular gave her the opportunity to craft programming around race and intercultural relations. Inclusivity is “important — and difficult — work,” she said. “It’s important, especially at Harvard, in this space of so much privilege, to think about communities that have been historically excluded, and how to bring them into the fabric of the university in a meaningful way.”

Sitting in the Harvard Art Museums’ Calderwood Courtyard after spring break, she described how these ideas played out in her senior thesis, “Authoring Curation: Museumized Spaces in Orhan Pamuk and Harvard University.” Ali’s work explores spaces of memory, inspired by ideas in the Turkish author’s novels and memoirs. She researched and wrote about several spots on campus in which the past and present intersect in intriguing ways, including in a gallery that examines the “Lure of the East.” Many of the works displayed there were collected by Grenville L. Winthrop (1864–1943), a Harvard graduate who gave his collection to the University because, Ali said, “he believed Harvard students — in his time, wealthy white males — would become future leaders and would therefore need or use the objects more than others outside the University.” It’s ironic, she said with a laugh, that “he probably never expected that I would be one of the students engaging with his works.”

The daughter of Pakistani immigrants, Ali grew up in Rancho Cucamonga, Calif., just east of Los Angeles. She was raised on a mix of Pakistani and American pop culture and also speaks Urdu. Bollywood films and Pakistani soap operas provided “this constant white noise in the background,” she said.

Coming from a close-knit family made for a bit of a culture shock at Harvard. “I didn’t realize how different living in a Pakistani-American household was compared to an American household and an American dorm,” she said. “I had to learn how to navigate between these two cultures — how to still be a part of my family while forging a path for myself.”

“It’s important, especially at Harvard, in this space of so much privilege, to think about communities that have been historically excluded, and how to bring them into the fabric of the university in a meaningful way.”
— Mahnoor Ali

The Harvard Foundation was one of the first campus groups she joined in her freshman year. She has since helped plan and lead discussions, lectures, and other high-profile gatherings. Last year, she co-directed the 33rd Cultural Rhythms Festival (a highlight of which was meeting Solange Knowles). Ali was particularly proud of the festival’s culminating performance at Sanders Theatre, which featured 12 groups of students from historically marginalized communities. “The show became a claiming of space that I think is so important and incredibly powerful,” Ali said.

Her drive to enhance common life on campus also led Ali to serve as a Peer Advising Fellow for the Greenough Hall entryway for the past two years. In this role, she has drawn on her early experiences with adjusting to Harvard.

“Freshman year can be this cluster of practical questioning — what do I want to do with my life? — and philosophical questioning — who am I in this context versus the context where I grew up?” Ali said. “I still don’t have the answers to those questions, but it excites me to help others who are asking them as well.”

Ali has worked as a student guide at the Harvard Art Museums since sophomore year, leading talks in the galleries for members of the public. Her tour, “Exploitation and Reclamation,” prompts visitors to think about some of the same issues that she cares about so deeply. “We look at how narratives have been skewed by otherness, or how subjects have been exploited by artists for subjective or aesthetic qualities, and what that means,” Ali said. She brings visitors to Sanford Robinson Gifford’s 1876 painting “Leander’s Tower on the Bosporus,” for instance, and questions whether his fictionalized representation of Istanbul exoticized the city for Western audiences.

Deep consideration of such subjects is not always what visitors expect in a museum. Yet paying attention to inclusion and belonging, in part by expanding representation, is central to the Harvard Art Museums mission. And according to David Odo, director of student programs and research curator for University collections initiatives, there couldn’t be a better undergraduate ambassador to raise these topics.

“Mahnoor is comfortable with, and skilled at, navigating the complicated spaces of intercultural dialogue,” Odo said. “She deals unflinchingly with the kinds of class, cultural, and religious issues that students and many others are particularly concerned with at present.” Odo, who oversees the student guide program, appointed Ali to be co-senior guide (the program’s top leadership position) for most of 2018. “She took on the extra responsibility with a level of sophistication that I’ve rarely witnessed in other students.”

Beyond Harvard, a continued focus

This summer, Ali will operate on a much broader scale. Having served last year as a Foreign Service intern with the Bureau of Population, Refugees, and Migration, she is looking forward to an internship at the U.S. Embassy in Athens. “My heart is in work around refugees and displacement,” she said.

Next, she’ll move to the other Cambridge for a year: Ali was awarded the Governor William Shirley Scholarship (one of four Harvard-Cambridge Scholarships) to study at Pembroke College, where she will pursue a master’s in English with a concentration on criticism and culture.

Her project will compare the same Pakistani soap operas she grew up watching (many of which are based on contemporary Pakistani novels) with the 18th-century works of Jane Austen. (Pakistan has a massive Austen fan culture; some devotees dress in Regency-inspired attire to discuss how her novels relate to their lives.)

For Ali, it will be yet another chance to explore themes that defined her time at Harvard: multiculturalism, identity, and the convergence of past and present. “Communication across time, place, and culture is endlessly fascinating to me,” she said.