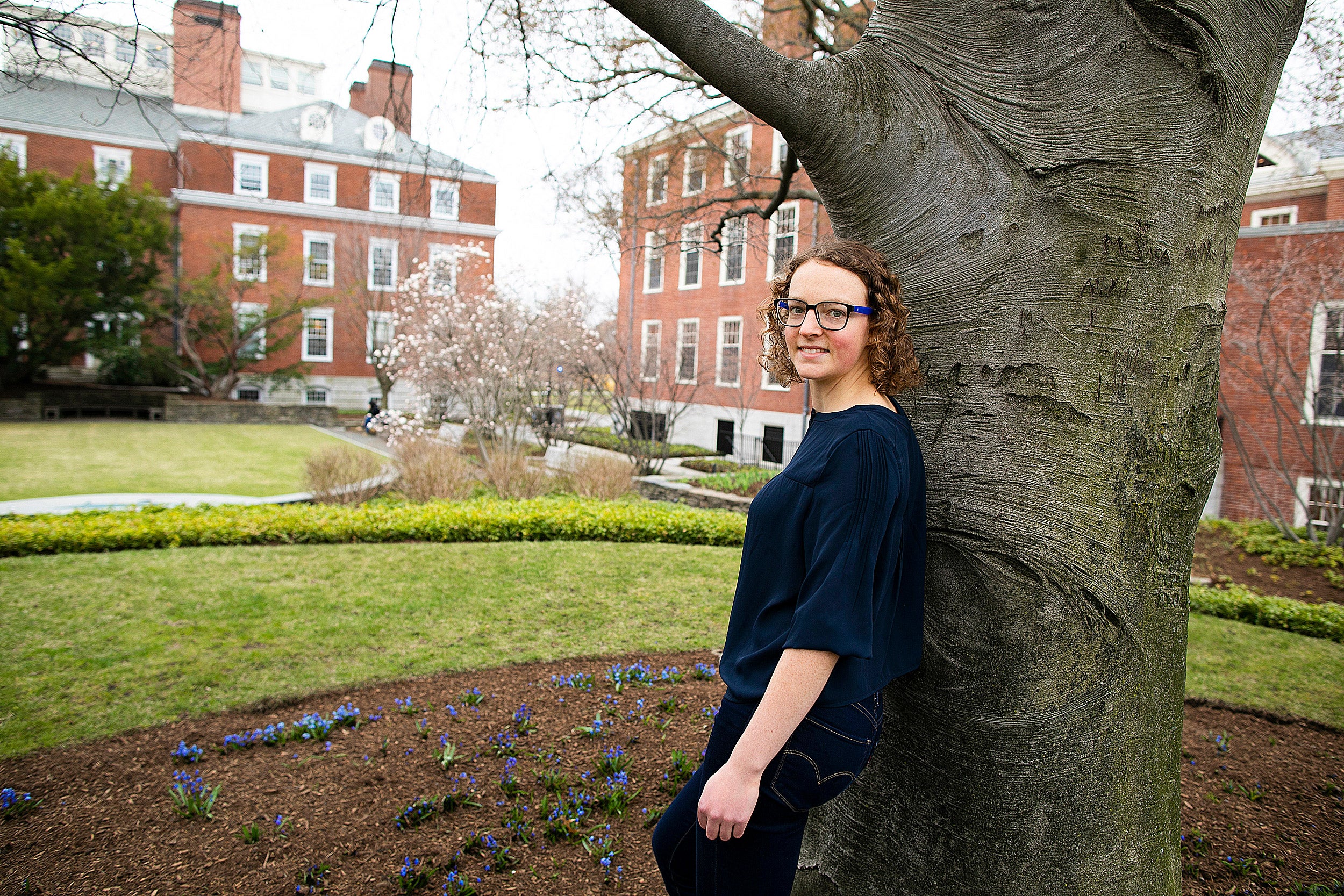 Gore, who addressed several thousand listeners in Harvard’s Tercentenary Theatre for Class Day, recalled the unrest of his own Harvard graduation 50 years ago. Despite civic turmoil from the Vietnam War, a polarized political system, and a president who “flouted the law” and “exploited division and hate,” those challenges didn’t approach those of today, he said. The checks and balances built into the U.S. system have weakened, he said, with more “compliant” judicial and legislative branches, while the internet and social media spread false narratives and “alternate” facts.

“Veritas — truth — is not only Harvard’s motto … but it is also democracy’s shield. And the right to pursue truth is the most fundamental right of them all, and that right is now at risk. And as a result, freedom itself is at risk, more so now than it was 50 years ago,” said Gore. “The system of checks and balances that has protected the integrity of our American system for more than two centuries has already been dangerously eroded.”

As dire as those threats are to American democracy, the threat of climate change looms over the whole human species rather than just one nation, said Gore, who shared the Nobel Peace Prize in 2007 for his efforts to combat global warming. Due to the “war” on facts and targeted misinformation campaigns by the fossil fuel industry and its supporters, the U.S. has the highest percentage of climate science doubters of any country in the world, Gore said. Those campaigns, modeled on past efforts by the tobacco industry, have been effective despite the parades of extreme weather events that happen with increasing regularity.

“We have to restore the role of reason and logic and rational debate,” Gore said. “Every night on the news is like a nature hike through the Book of Revelation.”

Yet despite dark times, Gore said, there is cause for hope. Technological advances have made renewable wind and solar power cheaper than fossil fuels in many countries. He said he has a deep belief in the power of people to create change, even change of the magnitude needed to slow global warming. Harvard too needs to change, Gore suggested, calling for divestment from fossil fuel investments. He called it a “moral issue” akin to past campaigns to disinvest from South African companies during apartheid and from tobacco companies.

“I’m here to recruit you,” Gore told the graduates. “We have work to do — all of us. We must see the seriousness and historic nature of this challenge.”

Class Day, traditionally held the day before Commencement, is intended as a more relaxed affair than the tradition-steeped rites to follow. Its speakers are selected by the graduating class and have spanned the spectrum from comedians such as Amy Poehler and Andy Samberg to political leaders like former President Bill Clinton and former Vice President Joe Biden. Last year’s speaker was award-winning Nigerian author Chimamanda Ngozi Adichie.

Students also heard from incoming Harvard Alumni Association President Alice Hill, who welcomed them to the worldwide community of Harvard alumni, and from College Dean Rakesh Khurana, for whom Class Day was his last opportunity to address the students before they graduate.

Khurana ticked off the changes in the seniors’ four years, everything from local shops opening and closing to new academic concentrations to students’ own transformations as they wrestled with identity and interest, passion and paths.

He said that the concept of who “deserves” the kind of experience offered by institutions like Harvard is at the forefront of the national educational discussion, brought there by a lawsuit questioning Harvard’s admissions policies and a national scandal over a fraudulent scheme to gain admissions to selective schools.

Khurana said the question of who is deserving could be applied also to debates on immigration and health care, but he added that may be the wrong question. He urged students to remember that many achievements happen not because they’re deserved, but because of background, opportunity, and luck, and that more important than opportunity is how it is used. He urged students to consider the kind of world they want to live in as they apply their skills and talents.

The day also featured the Harvard and Ivy orations, delivered by graduating seniors Eunice Mwabe and Nicolas Hornedo, and the annual Ames Awards, given in memory of brothers Richard and Henry Ames, Harvard students who died in 1935 trying to save their father, who had been washed overboard during a storm off the coast of Newfoundland. The award is given to seniors who have shown heroic character and energy in helping others, and whose contributions might not be widely acknowledged.

This year’s winners were Sally Chen, who was honored for her commitment to fostering equality and representation in higher education, and Jessica Ekeya, who worked to make the University more accessible to the deaf. 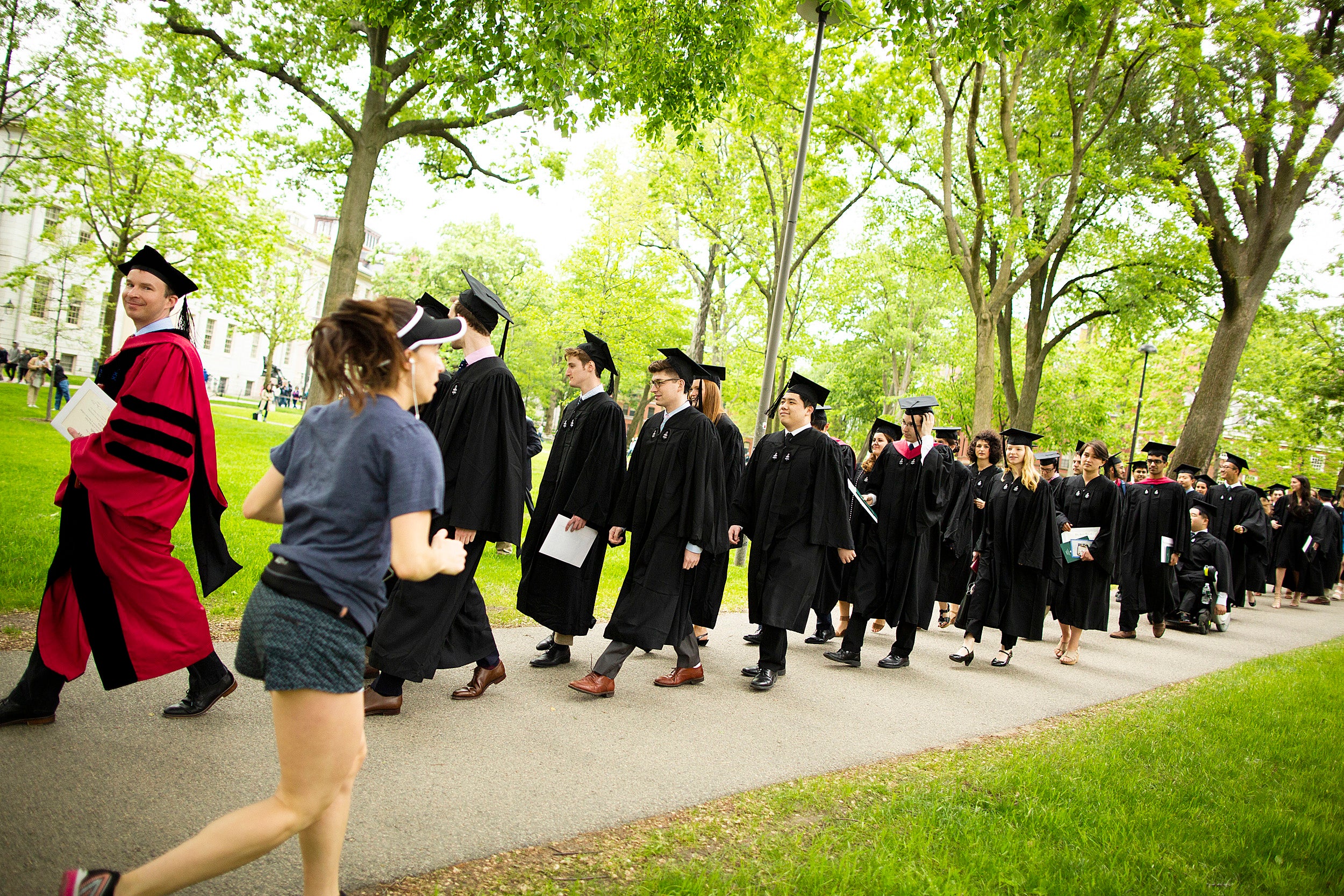 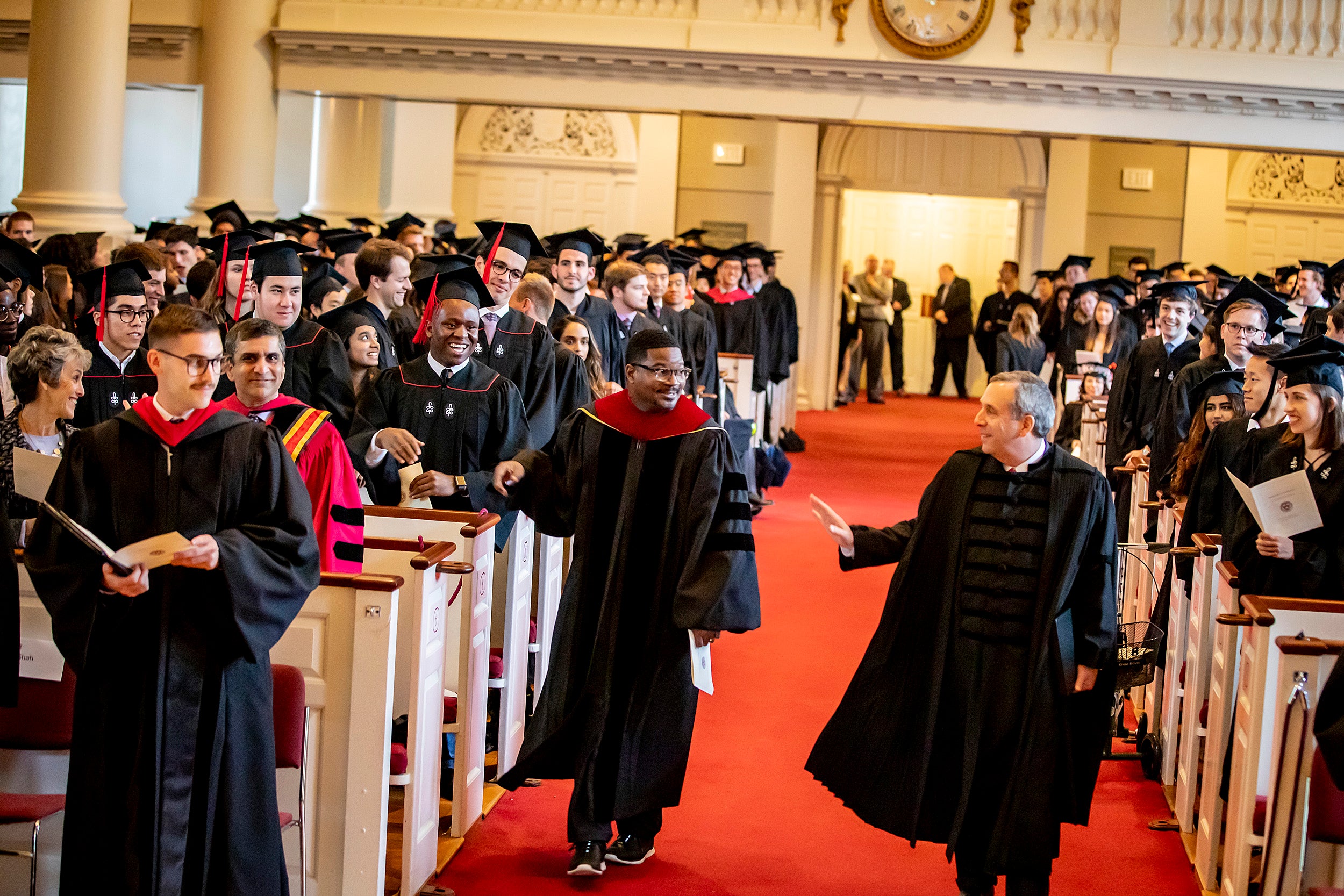 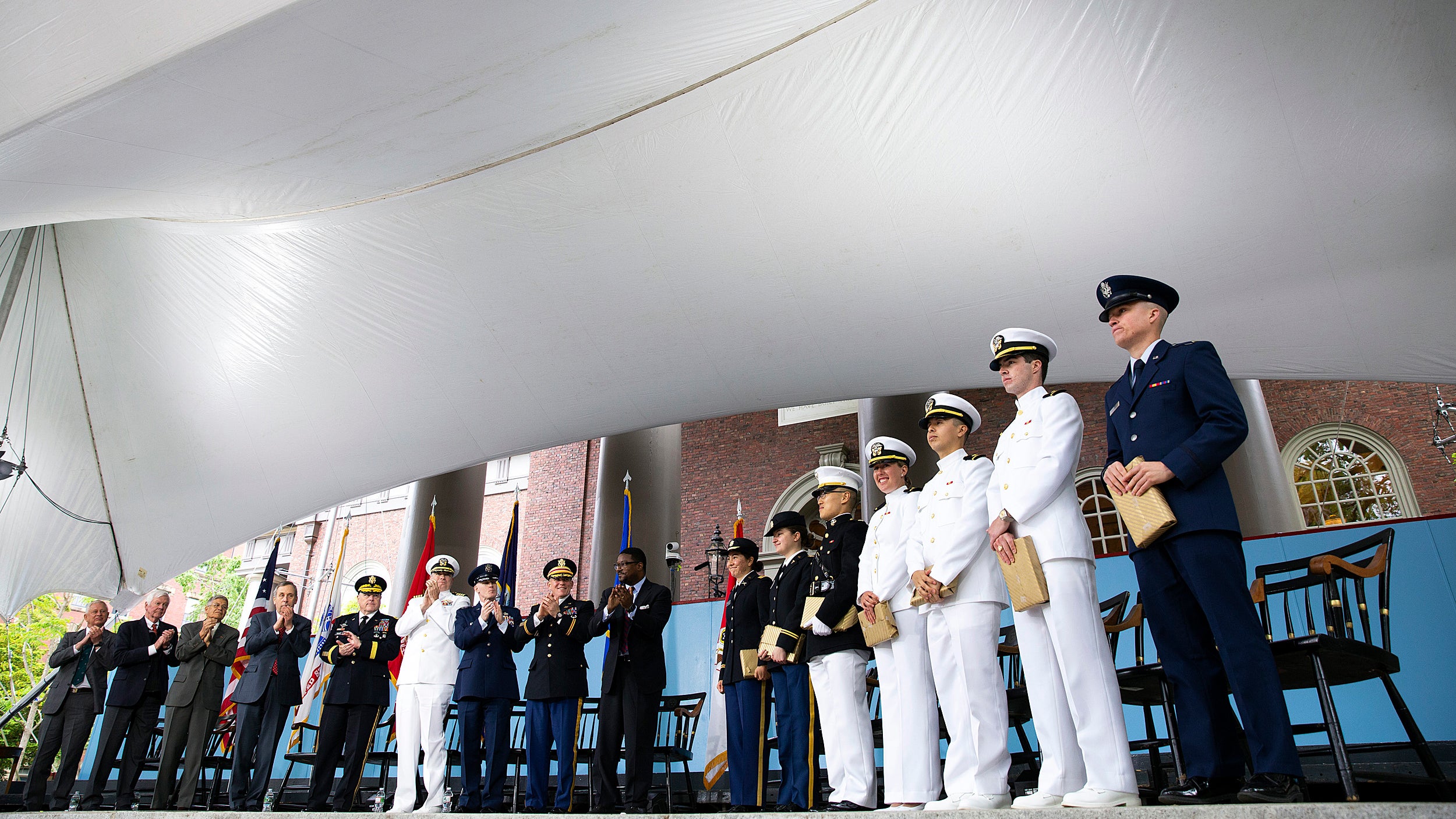 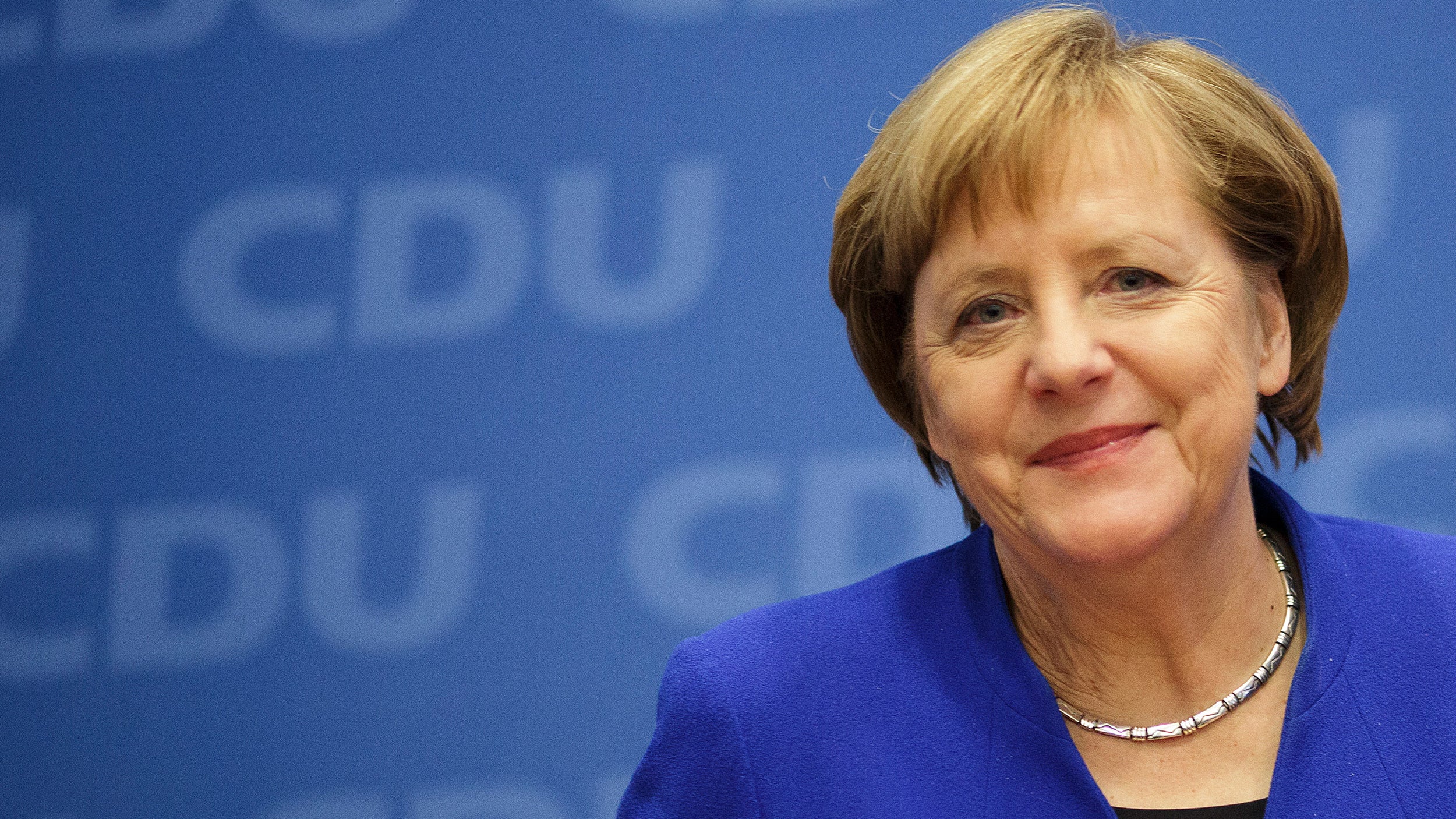