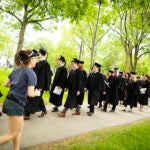 Harvard President Larry Bacow called on graduating seniors during their Baccalaureate Service on Tuesday to live their own lives to the fullest by defying master plans and other people’s expectations, and instead following their own passions and ideals.

Bacow related how he quit his legal studies when, while working one summer, he found himself counting billable hours and suddenly decided to explore other career paths. They eventually led him to the presidency of Harvard.

“In my experience, those who lead their life according to some masterplan are often disappointed when they ultimately reach their destination,” Bacow said. “They have been so focused on their goal that when they finally get there they often ask themselves, ‘Is this all there is?’

“Be open to serendipity. Perhaps the most valuable piece of advice I can give you as you get ready to leave here tomorrow is to recognize opportunity when it walks up and hits you in the face, because it will. In my wildest dreams, I never could have imagined I would someday be standing here before you as president of Harvard. … Always remember that you don’t have to stop breathing to stop living.”

The graduating class includes 1,554 graduates from 60 countries and all 50 states, as well as Washington, D.C., Puerto Rico and Guam.

The Baccalaureate Service is a ritual as old as Harvard’s first Commencement in 1642. The late Rev. Peter Gomes, who was Pusey Minister in the Memorial Church and Plummer Professor of Christian Morals, called it a ceremony “both joyful and solemn, intimate and public, filled with the exuberance of youth and sustained by venerable and weighty tradition.” Tuesday’s service was conducted by the Rev. Professor Jonathan Walton, Gomes’ successor as Plummer Professor and Pusey Minister.

Following custom, the gathering included scriptural readings from various religious traditions in their original languages. There were readings from the Quran in Arabic, the Bhagavad Gita in Sanskrit, the Hebrew Bible in Hebrew, the New Testament in Greek, the Sri Guru Granth Sahib in Gurmukhi, the “Apology of Socrates” by Plato in Greek, and the Namokar Mantra in Prakrit.

During his address, Walton asked students to take joy in their achievements and to remember those who helped them on their journeys to Harvard, and will continue to help as they move beyond it.

“We celebrate your efforts, achievements, and intellectual acumen,” said Walton. “Nevertheless, in the words of the poet John Donne, no man or woman is an island unto themselves. Family, friends, and faith communities have invested in you materially, inspired you intellectually, and enriched you spiritually. We are all here because of someone else’s sacrifices.”

In closing, Walton urged the students find a cause greater than themselves, to commit their lives to service and sacrifice, and to follow the example of Adolf Sannwald, a Harvard Divinity School student who graduated in 1925. He became a Lutheran pastor who was drafted by the German army in 1942. Sannwald’s name is etched on the walls of Memorial Church.

“He was a member of the German army during World War II,” said Walton. “This is why ‘enemy casualty’ is etched under his name. Sannwald was affiliated with the Confessing Church movement that protested Hitler’s Third Reich. When the German army drafted Sannwald in 1942, military brass would not allow him serve as chaplain due to his sermons critical of the Nazi regime. The German army leaders placed Sannwald on the front lines. Within months he was killed by air raid.

“The Memorial Church stands as a testament to service and sacrifice, paideia and piety, veritas and caritas,” said Walton. “We are all called to a cause greater than ourselves. … Like Adolf Sannwald — the presumed ‘enemy combatant’ — we should never assume that our service will come with accolades and awards. Trying to do the right thing may come with a price. Some may even label you an enemy combatant.

“In the words of Zora Neale Hurston, ‘If you want that nice feeling that comes from doing things for other folks, then sometimes you have to pay for it with abuse and misunderstanding.’ But this is a small price to pay to honor the dignity of human personality.”