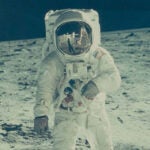 The student body of Harvard College outnumbers the population of Dalton Brunson’s hometown of Jackson, Ala.

“I grew up wanting to go into business. It seemed like bankers were the ones who made it,” Brunson said. “And then my grandmother got sick — that’s what pushed me toward medicine.”

Brunson came to Harvard to study biology, pursuing his concentration in the Department of Stem Cell and Regenerative Biology. He has thrown himself into research projects across the spectrum, from studying zebrafish at the lab bench to analyzing patient data.

Given the directions he could follow, Brunson keeps his singular goal in mind: to serve rural areas with limited health care resources.

Brunson was inspired to study Human Developmental and Regenerative Biology by the concentration’s emphasis on hands-on, independent research. He landed in the lab of David Langenau, associate professor of pathology at Harvard Medical School and Massachusetts General Hospital.

Under the mentorship of Langenau and postdoctoral fellow Chuan Yan, Brunson used zebrafish to model different types of cancers.

“We use a transparent type of zebrafish, which lets us easily see cells under the microscope and rapidly test different chemotherapy drugs,” said Brunson, whose research was published in the high-profile scientific journal Cell.

“Dalton, along with Chuan Yan, developed immune-deficient zebrafish and successfully grew human cancer. Together, they used their model to identify a new drug combination for muscle tumors,” Langenau said. “It’s the first time in my lab that we’ve made a finding that will likely be translated to patients — it’s truly remarkable.”

“Dalton has become the go-to person in the lab in terms of defining how we do certain experiments and thinking deeply about what models we will develop next,” said Langenau.

Brunson always keeps patients in his sights. During an internship at the National Patient Advocate Foundation in Washington, D.C., he researched policies to make expensive medicines accessible to patients in rural areas.

“My grandmother couldn’t afford her cancer medicine because of a gap in insurance,” he said. “That’s what got me interested in health care policy and getting health care resources into limited-resource settings.”

To get experience with research in the clinic, Brunson worked at Boston Children’s Hospital under the mentorship of Andrew Fine, a physician who specializes in pediatric emergency medicine. Together with medical fellow Kristen Shanahan, Brunson evaluated the hospital’s approach to treating children who experience fainting episodes.

“I learned how you could take something you saw in the clinic and put it into research,” Brunson said. For his next project, he did just that.

Once a month, Brunson goes to the blood bank to donate platelets, the component of blood that helps with clotting. “My goal is to replace every unit of blood product that my grandmother used in her treatment,” he said.

“Platelet donation is a lot different than donating whole blood. It’s riskier, and it takes longer,” Brunson said. “Another problem is that platelets only last five days after they’re collected. So, it’s really important to get donors to return and donate regularly.”

Brunson found a lot of research into how whole-blood donors behave, but none focusing on platelet donors and what prevents them from coming back. “So, I wrote up a proposal and sent it to Dr. Fine, not expecting much — but he turned around and said, ‘Let’s do this!’”

Brunson’s goal is to go into medicine, but he is open to different ways of getting there.

“I’m so enthralled by research, and I’m trying to open as many doors as I can,” he said. “Harvard has really allowed me to dive into different areas and truly explore them. … It allows me to see what a career in these different fields would be like, and how I could make a difference.”