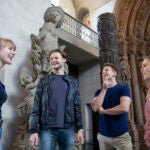 Having just returned from observing India’s national elections, Ashutosh Varshney, the Sol Goldman Professor of International Studies and the Social Sciences and professor of political science at Brown University and a resident fellow at Harvard Kennedy School’s Ash Center for Democratic Governance and Innovation, sat down with the Gazette for a conversation about how Prime Minister Narendra Modi’s Bharatiya Janata Party (BJP) won such a convincing victory and what is at stake for the world’s largest democracy.

GAZETTE: Many observers thought Modi’s BJP was likely to hold onto power, but few thought the party would outdo its strong showing in the 2014 elections when it won an absolute majority in India’s parliament. How did Modi and the BJP beat expectations and top its 2014 performance?

VARSHNEY: Virtually all election outcomes are driven by multiple factors. As of now we don’t have the data to identify the one factor that stood out against the others. But anecdotally, we’re able to point to the most important factors.

One is the sheer weight of Modi’s personality and his credibility. A lot of Indian political leaders have been tainted with corruption charges. Indeed, so many have had that charge leveled against them that for a prime minister not to have any credible charges of personal corruptibility has stood him in very good stead.

The second has to do with national security. Responding to a recent terrorist attack, Modi ordered the air force to strike inside Pakistani territory. The very fact that an air force strike took place inside Pakistan’s territory made him extremely popular and showed his decisiveness. As a result, national security became an election issue — a big election issue. Congress, the main opposition party, had virtually nothing credible to say on the topic.

And the third point, which is the most controversial of all, is Hindu nationalism. It may be that a great deal more of India’s electorate now, compared to anytime earlier, is comfortable with the main tenet of Hindu nationalism: that the Hindus, the majority community of India, have primary ownership of the nation, and the minorities are secondary citizens — at least politically, if not legally.

GAZETTE: Why did the opposition’s political messaging fail to resonate with the electorate?

VARSHNEY: There were three main issues the Congress party leveraged during the campaign. One of them was attempting to paint the prime minister as corrupt and claim that he’s a thief. As prime minister, Modi styled himself as “the watchman of the country.” Congress responded with the slogan “The watchman is a thief.” Congress’s second issue was unemployment, and the third was responding to the country’s farm crisis. “The watchman is a thief” slogan drowned out the two more important themes — namely unemployment and agrarian distress. And the slogan did not work.

GAZETTE: What is Modi’s second-term agenda likely to look like now that his party has received such a large mandate from the voters?

“As prime minister, Modi styled himself as “the watchman of the country.” Congress responded with the slogan “The watchman is a thief.”
— Ashutosh Varshney

VARSHNEY: That is the million-dollar question. There are two sides to Modi’s political persona, or political style. One is advancing India’s economic rejuvenation with policies that heavily rely on the model he crafted in the state of Gujarat, where he was previously the chief minister. A lot of the middle class hopes that he will deliver on his economic promises.

Another part of his economic program is dealing with the underprivileged and the deprived. He has proposed a lot of schemes, some of which have at least partially worked. These include simple things like providing gas connections to women who used coal-based energy or building toilets throughout India. It’s not as successful a program as the government claims, studies show, but still, he has partially delivered. A lot of people believe that he will deliver more.

GAZETTE: And the second side of that political persona?

VARSHNEY: He has been ideologically committed to Hindu nationalism, which claims that India is a Hindu nation and non-Hindu minorities should recognize Hindu primacy, should accept their secondary status, and submit to this primacy in all kinds of ways. If he were to implement this ideology, it would be by restructuring state institutions, by changing how the bureaucracy and police work, by perhaps also thinking of changing the constitution. India’s constitution is a liberal one. It says that all religious communities of India equally own the nation and all individuals — regardless of gender, caste, language, or religion — have equal claims on the state, and their rights accrue from that. Hindu nationalists never believed in it. 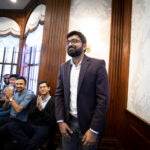 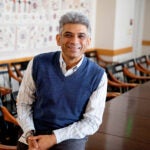 GAZETTE: What would the consequences of that be?

VARSHNEY: Were that to happen, it would be, in my view, a catastrophic development. It’s unlikely that minorities would take it lying down. It would be a new source of grave unrest.

I hope it doesn’t happen, and I hope he can see the obstacles very clearly. But if he were to put his mind to it with the resolve he has demonstrated over the past five years in Delhi and more than 10 years in the state capital of Gujarat, if he were to deploy the same determination to the task of changing the constitution, it would be a catastrophically tragic move.