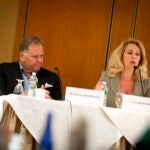 Harvard President Larry Bacow stressed the importance of research partnerships between universities and municipalities during a roundtable discussion last week with Phoenix Mayor Kate Gallego ’04 and other city officials. Such partnerships, he said, can help to solve real-world problems.

Harvard’s relationship with Phoenix, the country’s fifth-largest city, began in 2017, when city officials were part of the inaugural cohort of the Bloomberg Harvard City Leadership Initiative, a collaboration among Harvard Kennedy School (HKS), Harvard Business School, and Bloomberg Philanthropies.

The initiative offers leadership and management training to 40 mayors from across the nation and around the world to help them find innovative solutions to some of the most urgent problems facing their cities. In Phoenix, whose weather includes some of the nation’s hottest temperatures, the partnership’s efforts included finding ways to help mitigate the effects of the oppressive heat, including an innovative proposal to install misters at bus stops.

“My recent visit to Arizona was especially wonderful because I was able to learn about the good work being done in Phoenix by Mayor Gallego and her team,” said Bacow. “Harvard alumni like Kate are making major contributions to the public good, and I am always interested to hear how the University might enhance or establish partnerships that put more of the knowledge we generate on campus to use in communities across the country.”

“As someone who was fortunate enough to go to college and even graduate school, I know the important role higher education plays in a person’s life,” Gallego said. “Not only can it expand professional horizons, but it provides a greater understanding as to our own place in the world and how we can do the most good for those around us. At Harvard, I was able to develop my passion for policy, and I took this passion into my role as mayor. For many residents, city government is the most tangible form of democracy, and I want to ensure that relationship is a positive one. It was wonderful to discuss my vision for the city with Dr. Bacow and learn more about how Harvard is investing in cities across the nation.”

With temperatures that often surpass 100 degrees, heat is a pressing, ongoing concern in Phoenix. In 2017, then-Mayor Greg Stanton and Peters took advantage of the Harvard Bloomberg program to explore strategies to tackle the issue.

According to Gallego, last year, 181 people died due to heat-related incidents, and city officials are committed to finding new strategies for collaborating to mitigate that.

Located in the Sonoran Desert, Phoenix is besieged by the “urban island effect,” a phenomenon that makes many metropolitan areas experience unusually higher temperatures due to the ubiquitous asphalt and concrete, which tend to retain heat.

As part of the collaboration between the Bloomberg Harvard program and Phoenix, last spring HKS Professor Linda Bilmes, the Daniel Patrick Moynihan Senior Lecturer in Public Policy and an expert on public finance, led a city field project.

“Phoenix is facing an existential crisis due to climate change and extreme heat,” said Bilmes.

Under Bilmes’ guidance, a group of students from HKS and the Graduate School of Design (GSD) analyzed the impact of heat on bus use and the costs and benefits of heat interventions. The students were struck by their findings.

“It was clear that the people who were suffering from the extreme heat were the poorest residents of the city, because they don’t own cars and depend on the buses,” said Bilmes, “They have to walk long distances to get to the bus stop and wait in very hot places.”

In their final presentation, students made several recommendations ranging from increasing the buses’ frequency to planting more trees to building more bus stops and water fountains. City officials have adopted some of the recommendations, said Bilmes.

“It is work that is valuable to the city and an opportunity for students to do very challenging work in a complex, real-world environment with city officials,” she said. “It also provides a direct pipeline for students who want to work in state and local government jobs.”

The work with Phoenix city leaders continued last summer as Firas Suqi, a former student of Bilmes who is pursuing a master’s in urban planning at the GSD, spent the summer as a Bloomberg Harvard City Leadership Fellow.

While there, Suqi helped pilot the concept of a transit stop enhanced with misters, a heat-mitigation intervention that had been analyzed by the students, to help bus riders keep cool. He also developed a model designed to predict and quantify pedestrian routes to transit stops, to provide help in places that most need it.

For Suqi, working in Phoenix was rewarding. Not only did he get to work on an important, complex problem, but he also grappled with data and collaborated with city officials, who appreciated his efforts.

“It was amazing to see that something that started in a class could have an impact on real people on the ground,” said Suqi. “It was a great partnership, in which I was able to apply what I learned in class, and city officials were able to benefit from it.”

A few years ago, Phoenix received a $100,000 grant from Bloomberg Philanthropies to paint municipal rooftops with reflective paint and help reduce and shed heat. Last year, it was named one of 35 Champion Cities for its broad work on heat preparedness.

Capping his Phoenix visit, Bacow and Gallego attended a reception hosted by the Harvard Club of Phoenix, the Harvard Club of Southern Arizona, and the Harvard Alumni Association, held at the Heard Museum. Bacow visited with nearly 200 alumni from around the region and took part in an on-stage conversation with Leslie P. Tolbert ’73, Ph.D. ’78, a member of the Board of Overseers and Regents’ Professor Emerita in the Department of Neuroscience at the University of Arizona. 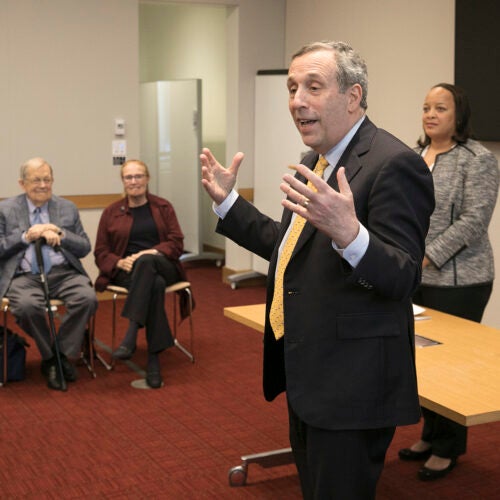 On Friday, Bacow traveled to Houston to meet with more than 300 alumni from the region at an event hosted by the Harvard Club of Houston, the Harvard Clubs of Austin, Dallas, San Antonio, the Rio Grande Valley, and the Harvard Alumni Association. Bacow participated in a Q&A session with Stephanie Wilson ’88, a NASA astronaut and engineer, and the second African American woman to travel into space.

Earlier in the day, Bacow met with teachers and administrators from the T.H. Rogers School who have participated in professional education courses at the Harvard Graduate School of Education’s Project Zero. Since 2012, dozens of Rogers teachers have taken part in the project, supported by Houston area Harvard alumni through the H2H Initiative. This summer, the alumni group will send 22 Houston educators, three from the Rogers School, to Harvard.