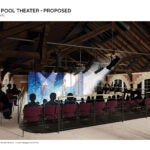 A new day for Adams House

As part of a series, two Harvard graduate students hold event for deportees and returnees

When Mayra Sandoval was in Mexico on a Fulbright Scholarship in 2016, she volunteered with an organization helping U.S. deportees and returnees navigate their lives after arriving in Mexico. Hearing some of their tales — both struggles and successes — Sandoval had a clear thought: These are untold stories.

In the U.S., she said, “I never really heard about what it was like when you are deported [or choose to return]. People just got forgotten.”

Now a master’s candidate in her final semester at the Harvard Graduate School of Education, Sandoval and her classmate Ariana Aparicio Aguilar want others to hear some of those untold stories, too. So they organized an event, “Return Migration: The Untold Stories,” that they hope will give attendees a sense of the hardships deportees and those who return voluntarily can encounter, along with the achievements they can attain.

The event, slated for 5 p.m. Thursday at Askwith Hall, is part of a series looking at immigration organized by the UndocuAllies Initiative, a HGSE student group that focuses on issues facing undocumented immigrants and those with Temporary Protected Status. Aguilar and Sandoval are the group’s co-presidents.

Return migration is one of the most pressing fears of the nation’s undocumented and temporarily protected immigrant populations, the pair said. And with political turmoil around immigration brewing in recent years, many of these immigrants have been forced to imagine the reality of that possibility.

For both Aguilar and Sandoval, the issue is personal. Sandoval is part of a mixed-status family, while Aguilar is among the more than 700,000 young adults who receive protection under DACA, the Deferred Action for Childhood Arrivals program.

“These are stories that we don’t really talk about here in the United States,” said Sandoval. “I know people who have gotten deported. These are our friends, these are our family members, someone’s dad or mom. A lot of the conversation is on DACA and students here. How can we help people here with immigration? But what about those people who don’t make it? What are those stories? Because they are still our family members, even though they are in different country.”

In fiscal year 2018, the U.S. deported more than 256,000 undocumented immigrants and the number is said to be rising, though it is still below that of the height of the Obama era. The number of undocumented immigrants who voluntarily returned to their home countries is largely unknown, though the Pew Research Center estimated that from 2009 to 2014 more Mexican immigrants returned to Mexico than arrived in the U.S. Family reunification was the top reason for voluntary returns.

For the event, Sandoval and Aguilar, along with other members of the UndocuAllies leadership team, organized a three-member panel to delve into what happens when undocumented immigrants who have lived in the U.S. for an extended period return to a country they may no longer recognize as home.

The panel — people who have researched the topic, worked in the field, or been personally affected — said that the experiences of returning from extended stays in the U.S. vary widely, with some finding fulfilling career and educational opportunities and others struggling to overcome significant cultural differences and even discrimination. They reflected that the experience for both the returnees and the families they left behind is difficult, but it does get easier.

“After a while it can become so much more,” said Daniel Arenas, the co-founder of Dream in Mexico, which helps connect 17- to 35-year-old deportees and returnees who have lived in the U.S. for at least five years with educational and employment opportunities in Mexico. To date, the organization has helped more than 3,000 young adults go over their options in Mexico and get paperwork such as Mexican ID cards and passport applications in order, and even met them at the airport on their arrival.

Arenas, who is the event’s keynote speaker, returned to Mexico in 2007 when he was 18 after living in the U.S. for 14 years. He has seen a number of deportees and others who have returned to Mexico start careers, earn degrees, and have strong economic stability either in Mexico or in other countries like Canada and Nicaragua.

But about a half-million young Mexican adults fit Arenas’ demographic, and he has also seen people struggle with cultural expectations or the economic realities of the area they are in.

Arenas said one man supported by Dream in Mexico felt disrespected after not being paid regularly for the work he did on his grandfather’s farm, where he also lived. The man didn’t understand that for many Mexican farmers, it’s normal not to pay workers until an animal is sold or crops are harvested. A young woman the organization worked with returned to live with her grandmother in a rural town. She became uncomfortable after her grandmother wanted her to adopt a more traditional female role in their culture and learn to cook and clean for the family. She eventually moved to a more contemporary-thinking city and worked in a call center, places where many English speakers find employment, Arenas said.

“They could tell that I didn’t grow up there. My accent was different. My mannerisms were different. … I think that was the hardest part, realizing that I was not Mexican enough and not American because I lack this piece of paper.”
— Ariana Aparicio Aguilar

But being bicultural isn’t always to their advantage. There is often stigma placed on those seen as too Americanized, opening returnees to bullying, discrimination, and alienation.

Aguilar had a similar experience on a 2016 trip to Mexico to visit her sick grandfather. It was her first time back in 16 years and she had to get special permission to go because of her DACA status.

“They could tell that I didn’t grow up there,” she said. “My accent was different. My mannerisms were different. The way that I dressed was different. I stood out even without opening my mouth. I think that was the hardest part, realizing that I was not Mexican enough and not American because I lack this piece of paper.”

It does gets better, Arenas said, as it did for him after people in his new community learned more about him and he built a strong support system of people who helped him adjust, fit in, and reach his goals. Finding a network is now one of the first things Dream in Mexico encourages deportees and other returnees to do.

The support system can include family still in the U.S.

Kenia Alfaro ’17, M.Ed., who will be on the event’s panel, remembers when her father was deported to El Salvador in 2012 after having lived in the U.S. for 20 years. Alfaro, who helped establish UndocuAllies, said she and her family who stayed in the U.S. became a large part of her father’s support system, keeping in contact and telling him about their lives while hearing about his. She said they’ve had to make a big effort to learn more about each other so they can have deeper conversations.

“We talk and share pictures,” Alfaro said, “and update each other when we can.” It isn’t easy, but, “We do the best we can.”

As for her father’s new life in El Rosario, the municipality where he lives in El Salvador, Alfaro said he’s adjusted somewhat. He had to reintegrate himself with the community and his family there and find a new sense of purpose and ways to pass the time, so he took up hobbies such as fishing, and found a way to integrate his experience in construction, which was the work he did in the U.S.

“He loves building things,” Alfaro said, “so he makes furniture for people and, every once in a while, he does remodeling on a space that needs it.” But in a country with a lot of economic disparity, she said, “He’s very open in talking about how difficult everything still is.”

The challenges went both ways. Alfaro and her family in the U.S. had to adjust to life without him and deal with the lack of income caused by his deportation. Alfaro also regretted not having her father there to witness milestones in her life, like graduations or launching her career at the Welcome Project, where she is now a development coordinator.

Those are fears Sandoval has always known.

“The risk of deportation and of being separated has always been something my family has thought of ever since I was really little,” she said. “I think that’s the scariest part — being separated.”

The fear reflects the experiences HGSE Professor Roberto Gonzales, the third panel member, has encountered in more than 17 years studying undocumented young people and mixed-status families in the U.S.

“Deportations, in particular, extend their reach into family life, impacting the structure, organization, and experiences of individuals and their families,” Gonzales said. “I’ve met spouses and children of deportees who were left to pick up the pieces after their loved one’s deportation and who were pressed to make very difficult decisions about either staying in the United States or joining their loved ones abroad.”

Arenas said following family members who have been deported is among the many reasons people choose to return voluntarily to their home countries. One he’s come across more often, however, is undocumented people trying to achieve a goal they’ve been blocked from reaching in the U.S. Reasons vary from being unable to renew DACA because of a criminal record to being afraid of not finding work without documentation to exhaustion from living in constant fear because of their status. Arenas, for example, chose to return to Mexico to earn a university degree, knowing it would be difficult for him to do so in the U.S. without the proper papers.

For reasons like that, he believes that migration — even return migration — “can be beautiful.”

“For a long time, a lot of us were seeing returning to Mexico or being deported as going to a black hole,” he said. “At first when you come back, that’s the only thing you think about. Then, instead of just thinking, ‘I’m not living in the U.S.,’ you’re thinking about, ‘Wow, I was able to get into a university in Mexico’; ‘Wow, I’ve been able to travel to several parts of Mexico’; ‘Wow, I’ve been able to learn about my culture and other family members.’ … So it becomes deeper than that.”

Aguilar believes hearing other returnees’ stories may help current undocumented or temporary immigrants see things in a more positive light, too. “My hope is that [this event and others sponsored by UndocuAllies] can provide a better understanding around the complexities of immigration in the U.S. and the intersectionality and nuances of undocumented people as they live in the shadows of American society,” she said. “My hope is that attendees can leave more knowledgeable and empowered to implement positive changes that will bring these communities out of the shadows.”

“Undocumented & Black: Race & Justice in America” on April 1 looked at the experience of black undocumented immigrants. Professor Cornell West was the keynote speaker. “Jin Park at HGSE: The Bittersweetness of Selectivity & Belonging” on April 8 looks at the experience of Jin Park ’18, the first DACA recipient to receive a Rhodes Scholarship. Other events in UndocuAllies’ “Immigration Series: Narratives of Self-reliance & Solidarity” examines immigration through particular lenses. The series is in collaboration with the Office of Student Affairs at HGSE, the Black Student Union, and the Pan Asian Coalition for Education. 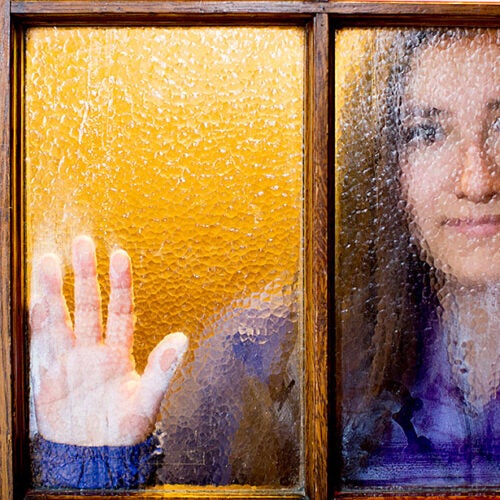 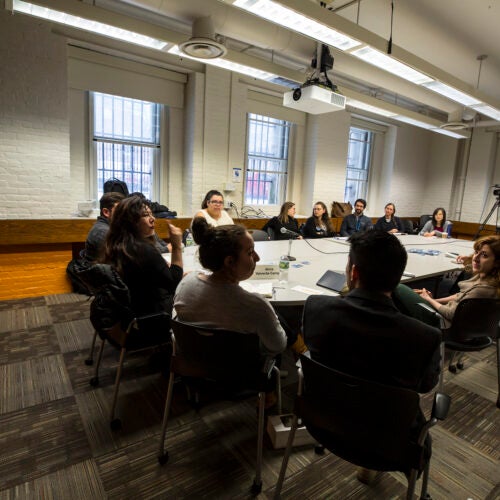 Undocumented students explain nuances of their situation, fears for loved ones