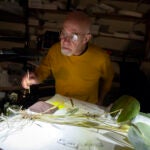 In Radcliffe talk, Lauren Groff says her success is based on defeat

As any writer will tell you, the process of writing is riddled with anguish, angst, and the ever-popular procrastination.

Groff, the Suzanne Young Murray Fellow at the Radcliffe Institute for Advanced Study, spoke about her process, read from her current work, and told her listeners on Wednesday that the only way she succeeds with her writing is by failing multiple times. “Failure,” Groff assured her audience, “is your friend.

“I know some of you have never heard this before and never failed at anything in your lives,” she said, “but when you are creating a work of art, or trying to create a work of art, what you want to do is fail, I think, because what happens is you come up against the boundaries of what you can and cannot do, the boundaries of what you understand and what you don’t understand. And understanding that, you are either able to skirt it, or to move the borders.

“Moving the walls is hard work and it’s beautiful,” she concluded. “It’s difficult, but that is what art is.”

For Groff, the work of a novel starts with months of reading, researching, and studying her chosen topic, typically a blend of ideas that have “crashed into each other.” The author said she spends “an absurd amount of time” writing her first draft in longhand, and that her inability to read her own scrawl forces her to scrap it and begin again. Then she repeats the process. Obsessed with William Shakespeare and aware that the Bard “was contemporaneous” with the characters she herself was creating, Groff even wrote an entire draft of her latest book in iambic pentameter. And true to form, she promptly discarded it.

As an undergraduate at Amherst College Groff submitted poems to all the literary magazines on campus and was rejected every time. “Out of desperation and sadness I took a creative-writing class.”
— Lauren Groff

But like a literary Marie Kondo, Groff is “happy to throw things out,” because she knows her ruthless disposal method works. Writing multiple drafts, abandoning them, and starting over brings her closer to her “Platonic ideal,” she said, and allows her to ultimately turn to the writing she loves best: perfecting her sentences. “That’s the joy … and the beauty for me,” she said. Even the Shakespeare experiment inspired her to find a kind of language for her current prose that feels both reminiscent of the 17th century and “as fresh now as it was then.”

Groff’s creative failures are preceded by months or more of meticulous research and followed by feedback from a range of early readers who review the draft that doesn’t land in the trash to help ensure her work remains morally grounded. One of those people is her husband, Clay Kallman, a real estate manager and developer; another is her editor, Sarah McGrath ’96, the vice president and editor-in-chief of Riverhead Books — or, as Groff calls her, “the best human on the planet.” Finding the right editor can bring failure in the form of trial and error, said Groff, but she called connecting with a person who understands who you are, what you want to do, and how to push you “invaluable.”

Literary failure came surprisingly early for Groff. As an undergraduate at Amherst College she submitted poems to all the literary magazines on campus and was rejected every time.

“Out of desperation and sadness I took a creative-writing class,” she said. In it she found her voice. The syllabus was filled with writers from diverse backgrounds and differing perspectives who were “talking about things I cared about,” said Groff. “The clouds parted … I haven’t looked back. I don’t write poetry anymore, just out of shame.” 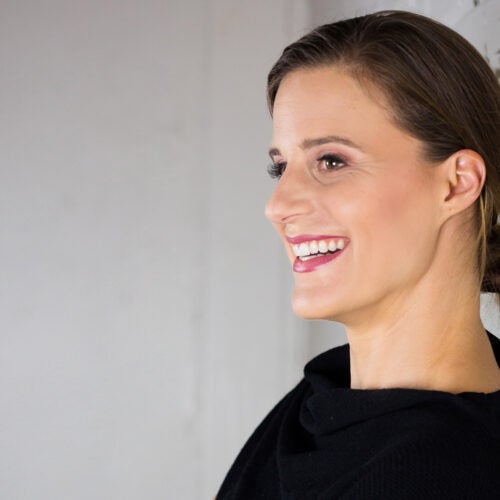 But her thriving career and prolific output are nothing to be ashamed of: Since 2008 Groff has released a book about every three years, sometimes even more frequently. She has published three novels and two short story collections. Among her many honors and recognitions are two National Book Award finalist nominations; shout-outs from President Barack Obama and Amazon, which named her “Fates and Furies” the book of 2015; and praise from a range of critics and reviewers. Earlier this month, her book “Florida”— a series of stories detailing the beauty and brutality of the state she calls home — won the Story Prize for an outstanding work of short fiction.

Groff’s varied choice of subjects is as impressive as her productivity. Her works have delved into a girl’s search for her father, a commune in Western New York, the complexities of marriage, the lives of 20th-century American women, and life, as she writes, in “an Eden of dangerous things.” During her Radcliffe Fellowship the author is at work on her fourth novel, “The Vaster Wilds,” inspired in large part by early American women’s captivity narratives, as well as by “Robinson Crusoe,” the classic tale of a man marooned on an island for 28 years, an article she read about the 17th-century Jamestown settlement in Virginia, her interest in survivalist stories, and her frustration with patriarchy following the 2016 presidential election.

Groff admits she too struggles when faced with the blank page, and often wonders, “How is it that people come up with ideas for books again?”

Her answer involves her own curiosity about the world and the concept of nuclear fusion. “This is the way that I see ideas coming to light in a novel,” said Groff of the combustive reaction that powers the sun. “A single idea for me is inert. It doesn’t actually come to life until two or more other ideas crash into it.”