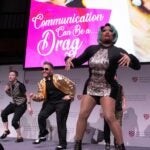 Two years ago, the Harvard Art Museums purchased “U.S.A. Idioms,” a massive collage and drawing by the contemporary artist Kara Walker, who first rocked the art world in 1994 with her cut-paper silhouettes that evoked slavery’s horrors and lasting impact in contemporary America.

“U.S.A. Idioms,” created in the summer of 2017 in the wake of the violent protests in Charlottesville, Va., involving white nationalists and supremacists and counterprotesters, takes aim at the same subjects through a series of vignettes depicting African-American figures and oppressors. In the work, bodies are woven through the branches of a dead tree; others perch atop a stump. A torn Confederate flag waves from one branch. What appears to be a white flag hangs from another.

Walker’s work speaks to the present moment “in a way that is so vital, so critical, so engaging,” said Mary Schneider Enriquez, Houghton Associate Curator of Modern and Contemporary Art, who helped acquire the new work and arrange the gallery where the drawing is on view through early October.

Similar to the images Walker crafted for her earlier silhouettes, the figures in “U.S.A. Idioms” are familiar stereotypes that come from our past and that we all have seen and taken for granted,” Enriquez said. “We all recognize in some way each of the figures in the piece, but the longer you look at it the more both familiar and then completely disturbing and strange the drawing becomes.”

In addition to “U.S.A. Idioms,” a print, an etching, and a pop-up book featuring Walker’s unmistakable silhouettes are also on display from the museums’ holdings. Pairing the new piece with the other items allows viewers to “see this work comes from what her practice is about,” said Enriquez. “It’s daring and it’s taking new risks, but at the same time it comes from her tradition.”

“U.S.A. Idioms” takes center stage in the museum’s first-floor contemporary gallery. At 12 by 15 feet, the work is one of the largest drawings in the collection. Its considerable size proved challenging for the museums’ installation team. Hanging the piece took “three straight hours with 11 people and no breaks,” said Enriquez. The drawing was slowly unfurled from a roller and affixed to the gallery’s wall with a series of small magnets. “We were unrolling it literally inch by inch so that nothing crumpled and everything was even. It was an amazing effort.”

Displaying the piece without a frame or any glass covering is an intentional curatorial choice, one the organizers hope will afford viewers a truer sense of the work and the artist’s process and intent. “One of the especially interesting things about a drawing (and collage) is the intimacy it provides; you feel the artist’s hand,” said Enriquez. Visitors will want to view Walker’s work and intricate details up close, she added, but they will also want to observe it from a distance.

“This bold, disturbing, extraordinary work on paper of this giant scale draws you in,” said Enriquez. “Yet it’s so big that you also need to step back in order to really see all of the imagery and the visual tension there that’s really dynamic.”

Walker’s new work fits with the museums’ core mission of teaching and learning, said Enriquez. “The demand for her work by major institutions and major collectors was enormous, so it was very exciting that we were able to get it for our teaching museum.”

The installation is also part of the “Vision & Justice” event and conference at Harvard next month, which will explore the role of the arts in understanding the nexus of art, race, and justice, with a particular focus on the African-American experience. 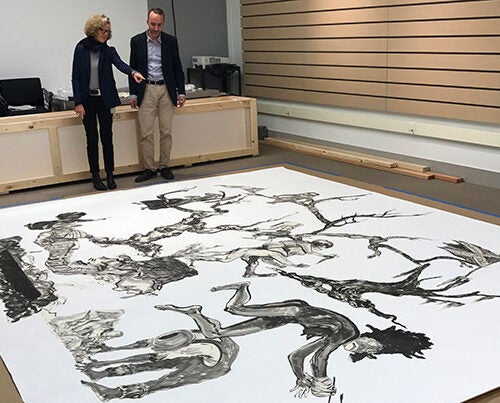