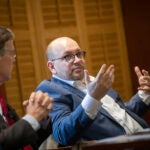 The next national election is nearly two years away, yet for the students and administrators who gathered for a national conference at Harvard, the time is now to begin strategizing how colleges and universities can spur young people to cast ballots in 2020 and influence the political debate.

About 125 participants from around the nation came to Cambridge from Friday to Sunday for the National Campaign for Political and Civic Engagement to share notes on campus voting initiatives in last fall’s midterm elections and to brainstorm on how to expand on them for the next cycle.

“Events like this are going to be extremely beneficial for bringing back ideas about increasing civic engagement and the participation rate on our campus,” said Stephen Cromwell, a University of Oklahoma junior. “It’s really important for us to help educate young people and let them know just how big an impact they really have.”

The event, another in a continuing series of such conferences hosted by Harvard’s Institute of Politics (IOP) at the Kennedy School, drew students and administrators from about 40 public and private colleges and universities, including rural and urban institutions, community colleges, and historically black colleges and universities. Speakers included student leaders of the March for Our Lives, formed last year to advocate for stricter gun laws, and leaders of Michelle Obama’s When We All Vote initiative.

The conference was intended to build upon the work of the Harvard Votes Challenge and similar recent programs on other campuses that raised student voter participation last fall. It also addressed the need to expand voting access for all citizens.

“Voting is just a right, and so if we’re in a representative democracy, then everybody should have access to the ballot,” said Delaney Vandergrist, a senior and student body president at North Carolina A&T State University. “Right now, we’re in a crisis, with all the voter suppression tactics and laws that are coming out.”

Taylor Whitsell ’21, student chair of the national campaign committee, said that last year participant Brittany Packnett made a valuable observation when she said voting rights are important every year, not just election years.

“That’s really one of the inspirations for this conference. We really want to make sure people’s voices are heard at all times and that we’re always talking about voting,” he said.

“Our consortium of schools has done a lot of amazing work around student voter participation,” said Rob Watson, director of student programs at the IOP. He said the conference was a chance to consider “our best practices, and where we can improve” — not just in turnout drives, but in “how we build lasting infrastructure that enhances student voter participation over time.”

“Voting is one of the hallmarks of democracy, and the United States, among many democracies, has challenges in voter participation across any demographic,” Watson said. The problem extends to young people, he said.

“We really wanted to change that narrative and to not come at this from a lens of blaming young people, but to really speak to the civic mission of the University to educate citizen leaders,” he said, citing the impetus for last year’s Harvard Votes Challenge. “We wanted to create the infrastructure for students to have the information they need to vote, to make it a part of our culture at the University that voting is what we do.”

Watson said he is optimistic that figures will show student turnout rose recently at Harvard. Voting among 18- to 29-year-olds surged across the country in 2018, spurred on by developments such as the Parkland school shooting, polls reported.

At Oklahoma State University, a student voter initiative led by Cromwell and sophomore Carson Ball resulted in 685 students registering to vote in the last election, the pair said. Cromwell and Carson also worked to expand turnout elsewhere, including in Native American communities.

“For 2020, we need to start preparing in 2019,” Ball said. “We’re getting ready for how we can reach out to more students, how we can partner with more organizations.”

At North Carolina A&T, the Student Government Association’s effort last fall included shuttling students to the polls, publishing a voter guide, and holding a candidates’ forum. Turnout was up over the last midterm by 59 percent and 53 percent, respectively, in the two precincts where students vote.

“I’m excited to see what happens in 2020, because I think we’re just off to such a great start, and we have such a strong foundation,” Vandergrist said.

Whitsell said it was exciting that “with the broad diversity of colleges and universities we are bringing to the table, we can address the different issues that they see on their campuses but then come together to find common solutions.”