Milo Ventimiglia is feted (and roasted) 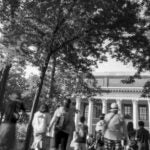 From bad boy to America’s TV dad, Milo Ventimiglia can now add Hasty Pudding Theatricals’ 2019 Man of the Year to his credentials.

Ventimiglia, who gained international recognition for his role as teen heartthrob Jess Mariano on the television series “Gilmore Girls,” visited Harvard to add his name to the wall at Farkas Hall and accept his pudding pot in a day of festivities that included a celebratory roast at the hall.

“This is great,” Ventimiglia said as he walked into Farkas Hall, the home of Hasty Pudding’s annual show, wearing a long coat and heavy black boots.

Ventimiglia personified the father figure he plays on NBC’s award-winning series “This Is Us” during his tour of the hall, holding the door open for everyone behind him, introducing himself to those inside, and even bringing his mother along for the celebration. “She wouldn’t miss it,” Ventimiglia said.

The tour started with a performance by the Radcliffe Pitches, Harvard’s oldest female a cappella group. The group stood seemingly thunderstruck as the handsome Ventimiglia walked in and introduced himself, but they serenaded him with three songs, starting with “This Could Be the Start of Something Great” and ending with “You’d Be Surprised,” during which he danced with Lauren Lee ’22.

The first song by the group hinted at the start of a new tradition at Hasty Pudding Theatricals. The troupe’s 171st production “France France Revolution” is the first to feature a cast of both men and women.

After the a cappella performance, Hasty Pudding members Allison Chang ’19 and Jessica Moore ’21 treated Ventimiglia to a tour of Farkas, explaining the club’s cherished history.

Moore, who also gave Hasty Puddings Theatricals’ 2019 Woman of the Year Bryce Dallas Howard her tour, said she was nervous. “He’s one of my childhood crushes,” she said. “I’m trying not to get starstruck.”

But Ventimiglia’s quiet and charming presence put her at ease as he absorbed the information she and Chang presented, at times flashing his signature crooked smile (a result of dead nerves on the left side of his face) at some of the club’s quirkier history, such as its five student members who became U.S. president.

“I’m definitely not going to be president,” Ventimiglia joked.

Since 1951, the Hasty Pudding, the nation’s oldest theatrical organization, has awarded its pudding pots to performers who have made lasting contributions to entertainment. The Hasty Man of the Year award was established in 1967. Recipients have included Robert Downey Jr., Tom Hanks, Chris Pratt, Robert De Niro, Harrison Ford, Justin Timberlake, Ryan Reynolds, and, most recently, Paul Rudd.

Ventimiglia has been a staple on the small screen, making a lasting impression on a generation of millennials who were introduced to him as young teens and reintroduced to him as adults. Along with being known for “Gilmore Girls” and “This Is Us,” he gained recognition for playing Peter Petrelli on “Heroes.” He made his mark on the big screen playing Rocky Balboa’s son, Rocky Jr., and most recently he can be seen starring opposite Jennifer Lopez in “Second Act.”

At the end of the tour, Ventimiglia affixed his name to the wall with patriarchal precision. He considered putting it upside down but quickly reconsidered the rebel act.

“Might have been something I’d have done when I was younger,” he said with a grin.

To purchase tickets to the Hasty Pudding Theatricals’ 171st production, “France France Revolution,” contact the HPT Box Office at 617-495-5205 or order online at www.hastypudding.org/buy-tickets. The show will be performed at Harvard University’s historic Farkas Hall at 12 Holyoke St. from Feb. 8-March 10. The company then travels to New York to perform at the Kaye Playhouse at Hunter College on March 15 and 16. Call 212-772-4448 for tickets. They will perform March 20‒22 at Hamilton City Hall in Bermuda. 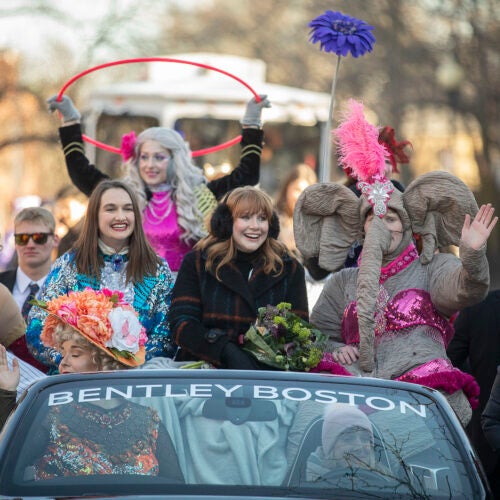